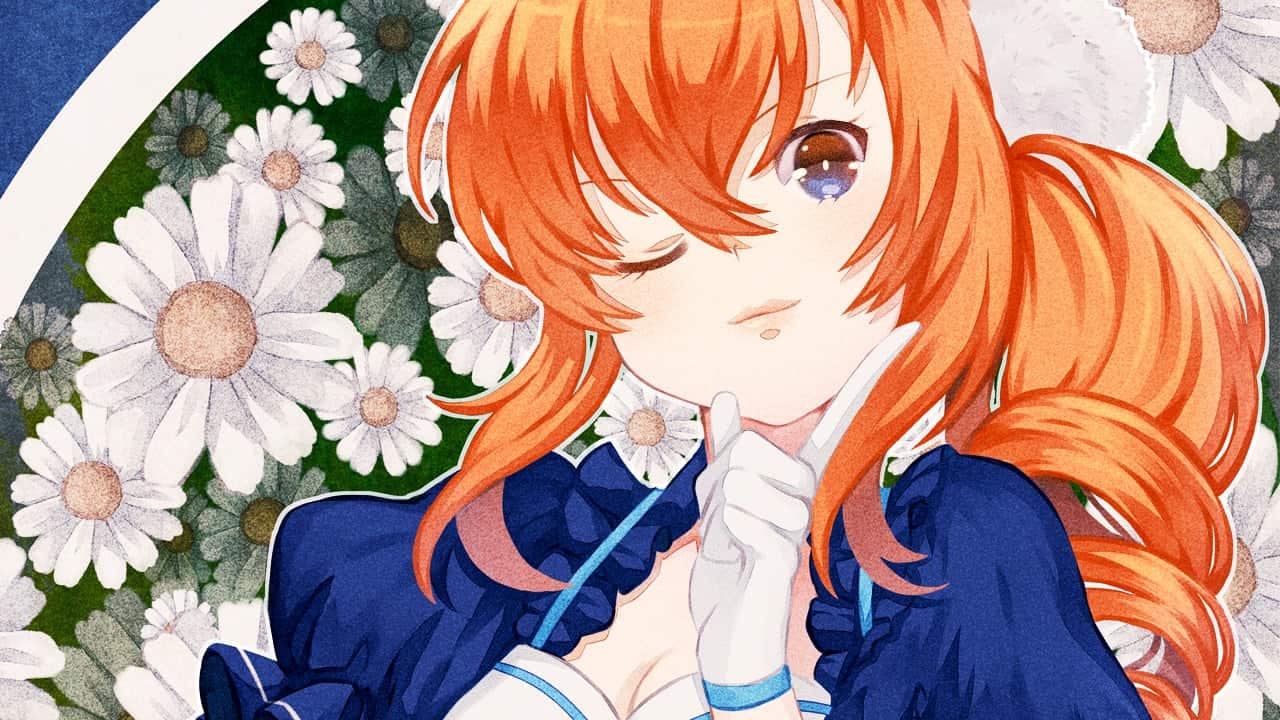 In the final days before the group was shut down, many new moderators and admins joined the group and were monitoring, approving, and disapproving upwards of 12,000 posts PER DAY! The group was growing at a steady rate of 5,000 – 10,000 new members per day.

This would have been a monumental achievement for the anime community in general and the AnimeWorld brand.

Everyone knows that this was the greatest group on Facebook for anime content. None of the other anime groups even came close to the community we were building here.

The moderators who worked on this group were clearly more respectable and dedicated than any of the Facebook employees who seem to give no regard to anything happening on the platform.

The group numbers (above) show how passionate and dedicated the AWU moderators were. Every day, the goal was to get all these numbers down to zero.

Post Approval – Moderators have to check every post from a group member, one by one, and ensure that the content is both appropriate and relevant to the group. This includes filtering out spam, nudity, advertisements, and posts that were not in English.

Member Join Approval – Most people who apply to join the group get in without discrimination, however accounts that are suspicious such as brand new accounts with zero friends or posts may get rejected. 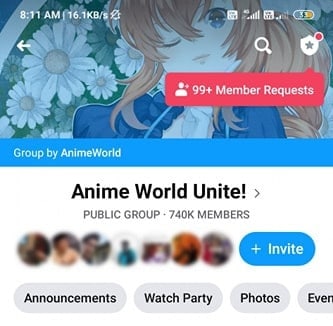 As you can see, managing the world’s largest public Facebook group for Anime related content is a full time job!

This is not the first time Facebook has decided to shut down the group with little to no clarity on the shutdown, however in this case, none of the moderators or admins of the group were able to locate a shut down email or notification.

EVERYONE on the team was completely left in the dark by this shut down and nobody from Facebook was giving any answers.

Likewise, we do not have a Case ID or any correspondence from Facebook that can be referenced.

This is Not the First Time

Second “Permanent” group shut down for posts made by a random group member, here.

Now here we are on the Third group shut down. Do you think we can get the decision reversed?

Damage to the Community

As expected from such a nasty and sloppy shut down on Facebook’s behalf, the owners and moderators of the group as well as the 740K+ members were panicking and had no idea what was going on.

The day our group passed 740K is the day the group mysteriously disappeared from @Facebook 🤔https://t.co/YGSy9fTS7x

This group supported a niche community from all aroud the world. #Facebookgroups #zucced #Libtards pic.twitter.com/RksBhtEfAY

Many people thought that they were simply banned from the group because they no longer saw posts from it. Memories and friendships were taken away just like that. 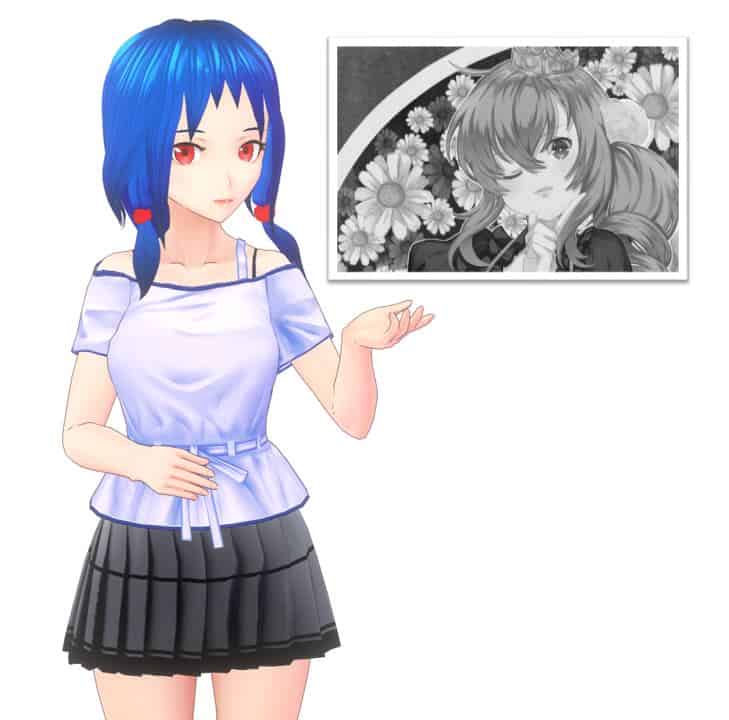 Not only was our anime group the largest public group, but the engagement numbers were massive as well, peaking 10K – 30K reactions per post. 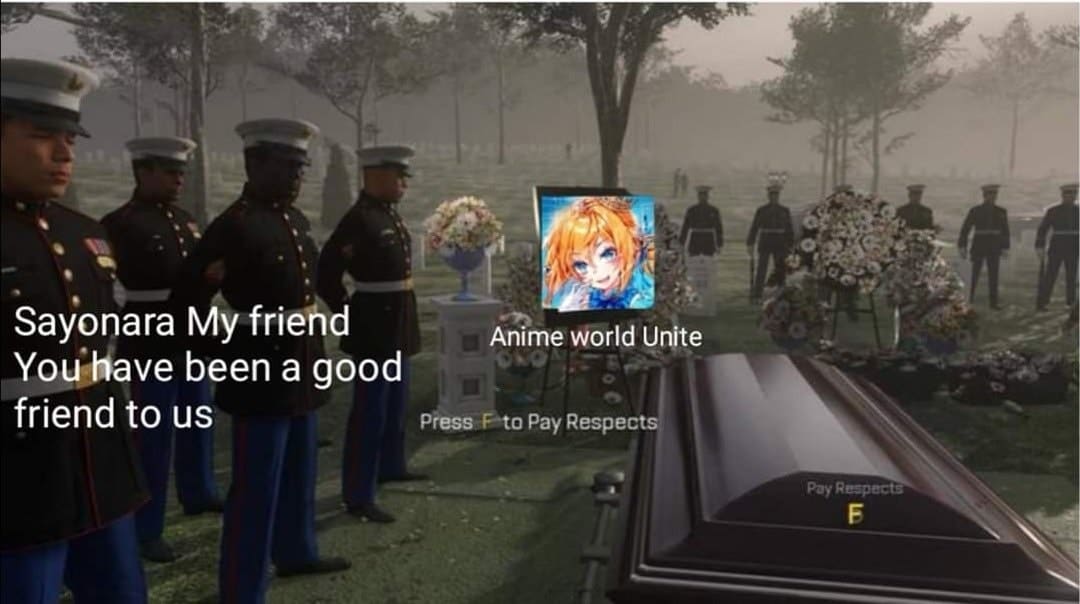 Last year, we saw Facebook doing a big push on groups for social media marketing and community building. We witnessed non-stop advertisements and promotions for people to join groups for their own interests and niches.

For all the pushing Facebook appeared to be doing for their “groups” it seems ironic that “AnimeWorldUnite!” continued to get shut down for the most arbitrary or unknown reasons.

How can Facebook expect top social media marketers and community managers to invest their time, energy, and money into groups when groups can also get shut down in the blink of an eye with seemingly no recourse or chance for group owners to get their groups back? 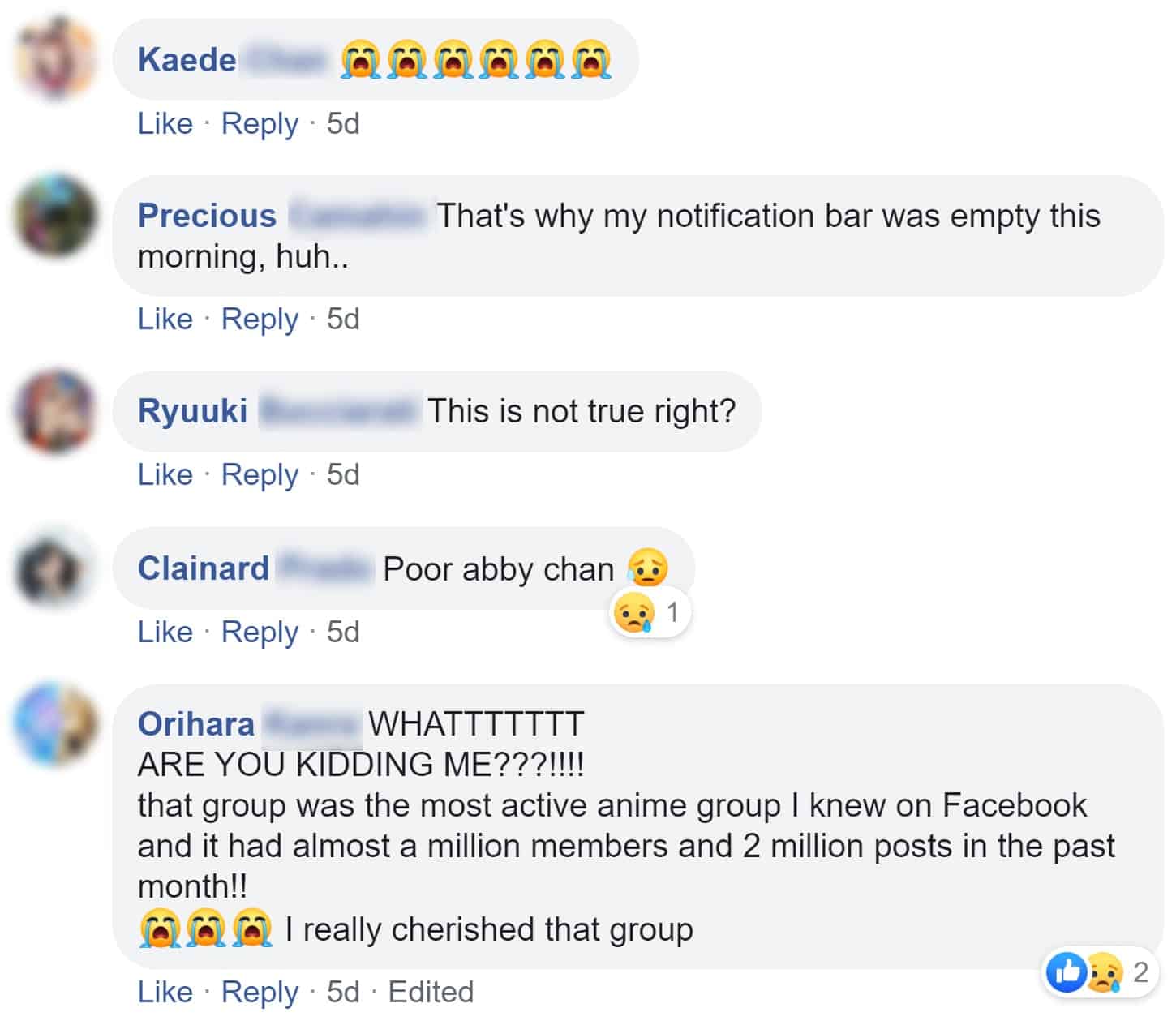 This should serve as a warning to anyone who wants to invest in Facebook Groups, consider the power Facebook holds and how they seem to enjoy abusing their power or granting such powers to low level employees who wouldn’t hesitate to destroy years worth of work with a click of a button.

Disabling Groups Because of Member’s Posts is Wrong

There is no way Facebook can justify this; when the entire group gets shut down because some post made by a MEMBER of the group allegedly infringes on someone’s copyright or Facebook’s arbitrary community standards, then what is the point of having groups?

Why would Facebook even decide to shut down the entire group based on the actions of one member? If a member is posting infringing content or violates community standards, shouldn’t that individual get their account blocked? Why does the entire group have to suffer for the action of one person?

The moderators of the group were filtering out spam, advertisements, and link spam; to be honest, this shouldn’t even have been the moderator’s jobs in the first place!

Facebook seems to put so much pressure on  group moderators and holds the owners of the group accountable when one member spams the group or steps out of line. As the group size increases, so the meticulous job of doing Facebook’s job for them also increases.

If Facebook truly cared about the growth of groups then our moderators shouldn’t have been in constant fear of the group being shut down due to spam or copyright infringement. Group moderators need to focus on content and community building, not avoiding the Facebook police!

Around 2018, the legendary Facebook Group “Purge” began, and many of the top anime groups were either shut down or switched to “private.”

Here’s the difference between the groups as we understand it:

Public Groups – Posts can be seen by people who are not even members of the group and shared.

Private Groups – Only members of the group can see posts and posts can not be shared.

For group growth, public groups are the best way to go! However, many of the admins of the larger anime groups decided to switch their groups to private in fear of more shutdown from copyright flags.

We don’t believe that switching groups to “private” was the best solution and it clearly shows. There are a few private anime groups that were larger than AnimeWorldUnite, however, these groups appeared to feature significantly less engagement and performance overall.

The growth of private groups is also significantly less in our experience. for more info please read here.

Clearly the Zuck seems to think that the “future is private” and therefore, we had no choice but to also create a private backup group.

To be honest, I don’t really know if there is any point in continuing to support and utilize Facebook as a platform for community management.

We are leaders on Facebook and we clearly knew more about running and managing groups than Facebook did, and yet we are the ones who get our groups shut down and the silent treatment from Facebook. 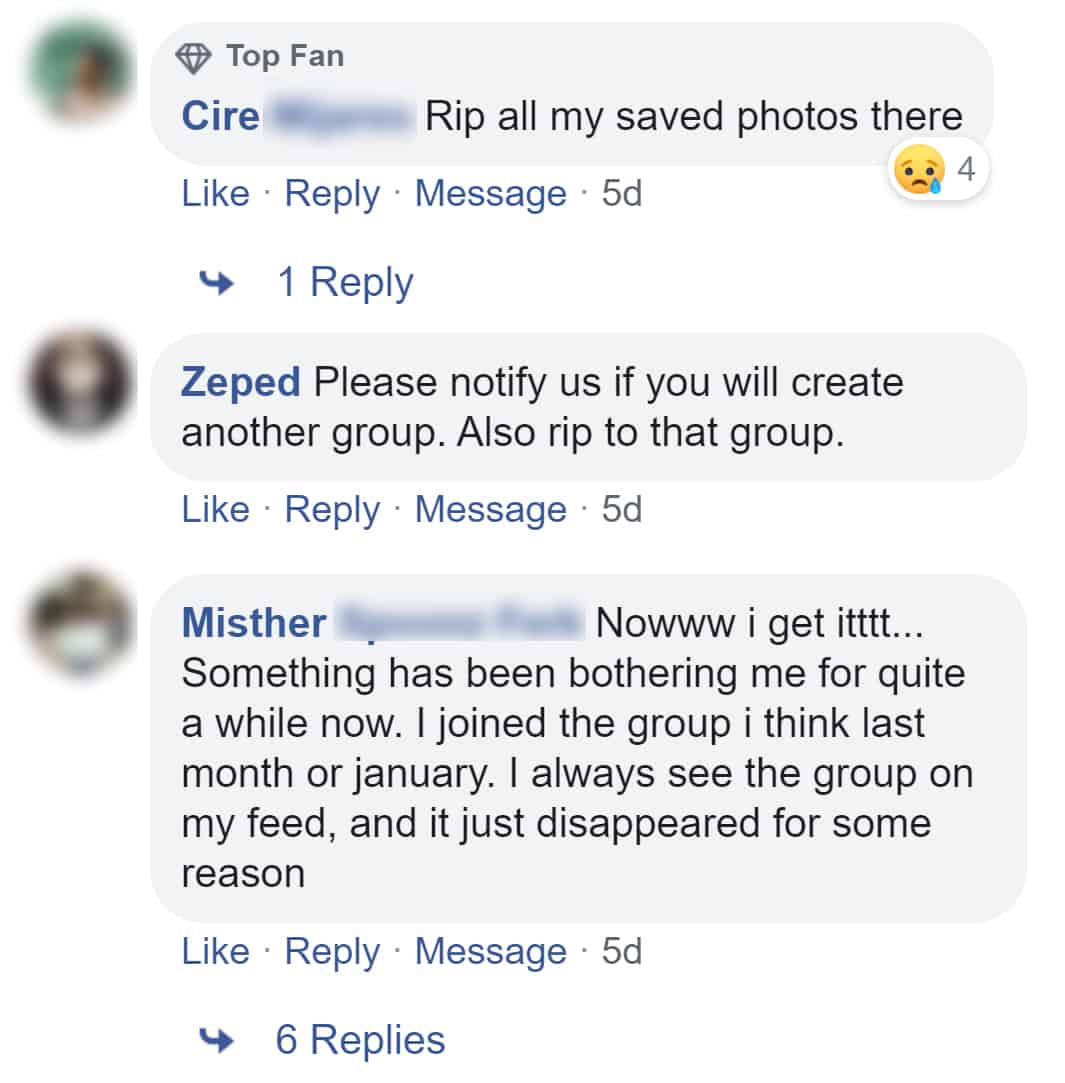 Hope to post an update regarding this situation and a positive resolution for everyone. We understand that Facebook is a massive organization and not everything can be reviewed carefully, but we do hope that someone with a sense of morality and responsibility will step up and do the right thing for everyone here.

Here’s the link for the new Private Group.

Finally, after months of waiting, we got the response that everyone was expecting…

Basically, nobody is going to take action here?

Stellar Facebook customer service as usual! Thanks guys for doing nothing.

We were finally able to get in contact with someone from Facebook who was able to provide a clear answer as to why the group was taken down, here’s the message we received: 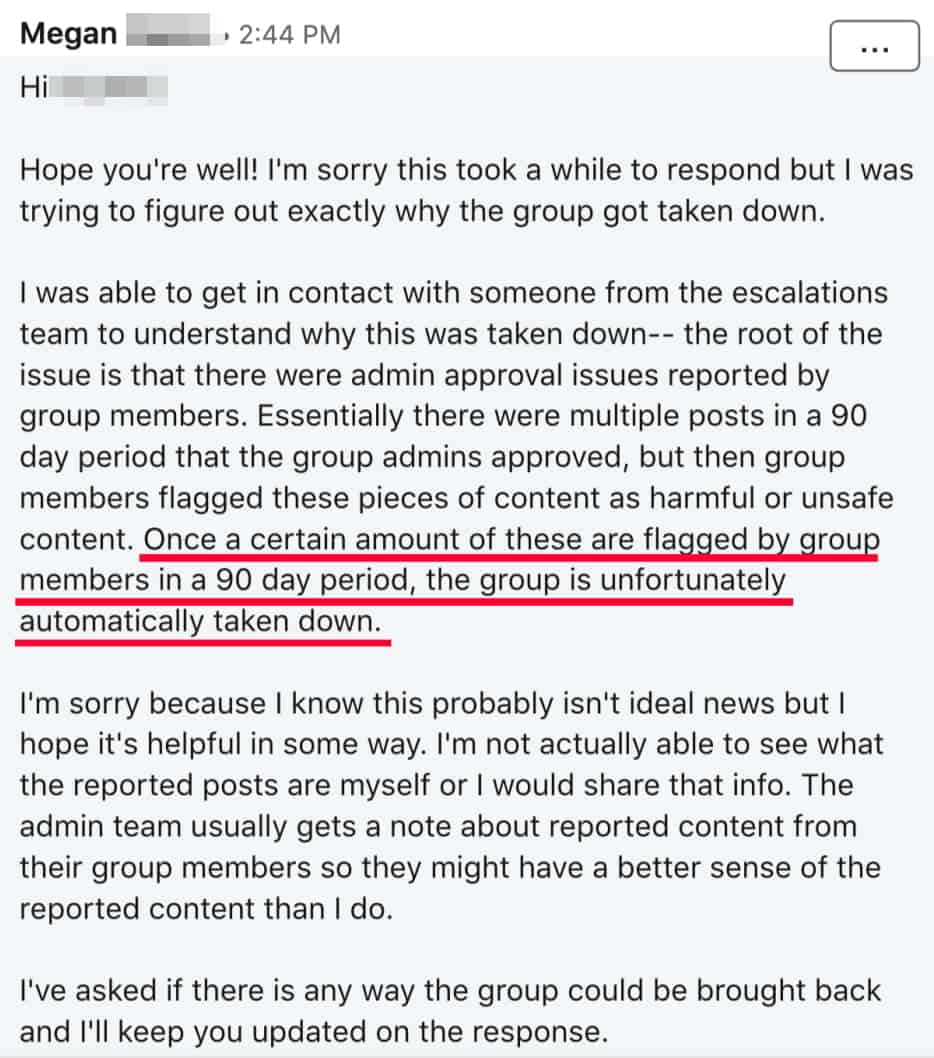 So according to what we see here, Facebook automatically takes down groups without actually evaluating the content.

Of course, as you have seen us suffer through multiple pointless contacts through Facebook, nobody is able to actually look into this matter or provide some valid reasons why our group should remain down.

Apparently this is how easy it is to take down any group. Just flag content and after you hit a “certain amount” the group will automatically go down and the group owners will be left with no ability to have any meaningful contact or response from Facebook.

Our group was the biggest and most popular group for anime in all of Facebook and it went down for no legitimate reason.

I would argue all the content being “flagged” was from loser weebs who were upset someone had a different opinion from them about their favorite cartoon character. I would also argue that none of the content posted actually violated Facebook’s terms of service.

I would even go so far as to argue that this could well have been a coordinated attack on our group by other group owners who didn’t like our rapid growth. (As seen previously with the fake copyright infringement reports last time)

I would also argue that nobody from Facebook has actually looking into the content being flagged or attempted to make any sort of contact with me, the group admin and owner, my email can be found here and you are welcome to contact us and hopefully remedy this situation at anytime, thank you!