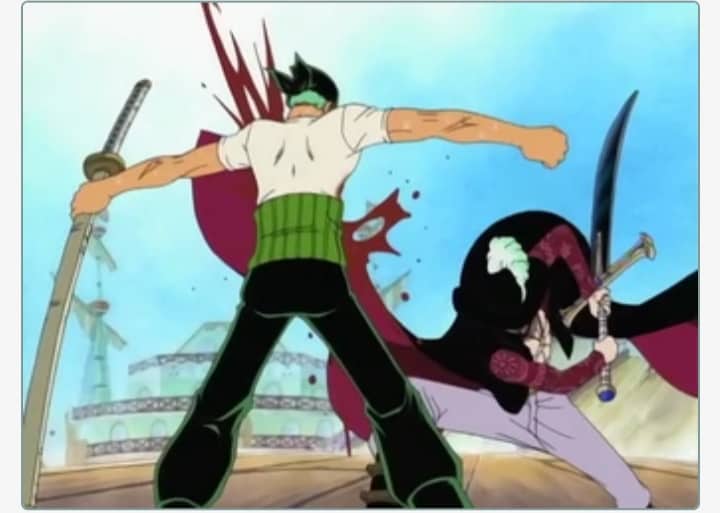 The Unique Music Alice Schach and the Magic Orchestra

Sword fighting is not new in anime as some of the most epic battles in Anime history have been fought with steel blades.

The art of Sword fighting in Anime goes  beyond just slashing, as our famous swordsmen have refined their skills to perfection, achieving the impossible with just a swing.

Swordsmen in most anime have outer worldly powers and with their art, they become formidable battle opponents. Their blades reflect the uniqueness of their abilities as well.

This swordsman comes all the way from the Naruto universe. The hiphop warrior raps and fights but that isn’t why he is on this list.

While so many people have problems wielding a sword, same cannot be said for Killer B. This shinobi wields seven swords at once effortlessly.

His acrobat style enables him to hold his blades in his stomach, his mouth, left armpit, right leg, right side of his neck and in both elbows. This gives him an unpredictability that ensured he overwhelmed the 4-man team Taka led by sharingan user – Uchiha Sasuke.

Killer B is also a Jinchuriki, hosting the eight tailed beast, this gives him enormous chakra and coupled with his amazing sword skill and lightning release, he is not one to mess with.

A surprising name on the list, but Captain Levi is humanity’s strongest soldier. He might not have super powers but he makes up for this with his brilliant, flawless skills that leave you wondering how good he really is.

Levi Ackerman is the captain of the survey corps, he has more so many solo kills of titans than can be remembered. He revolutionized the way survey corps fight.

He is extraordinary intelligent and it is almost impossible to read his mind because his face is devoid of emotions. #pokerface

Victories against the female titan and beast titan are some of his greatest achievements as the whole brigades and even Eren’s titan form couldn’t win these battles.

King Bradley is one of the strongest character from Fullmetal Alchemist. In the history of Anime, he will have a place amongst the most intimidating men ever.

The presence of King Bradley on a battlefield is enough to change the tide of the battle, as his sheer skills and power, charisma and intimidation tactics makes him an opponent you should avoid.

His swordsmanship is not in doubt as he successfully took down a military tank with nothing but his swords!

Being one of the strongest Homunculi, he has enhanced speed, strength, reflexes and durability…. King Bradley is a monster.

The most famous and influential of all Anime swordsmen. He rose through the ranks as a samurai, finally becoming a symbol of carnage and death.

Moving faster than the human eye can see, the master of Battojutsu can kill you by just unsheathing his sword.

Using a reverse blade sword, Kenshin can choose to defeat without killing. His ability to effortlessly cut through steel tells you everything you should know about Battosai.

With the myriad of talented swordsmen from the One Piece universe, it is testament to Mihawk’s strength and skills that he stands out above his competitors.

Mihawk being able to defeat well trained samurai’s with just a dagger doesn’t even do justice to his monstrous skills as he can slash through mountains and icebergs. He is undoubtedly the most powerful swordsman in anime.

Getting out of deadly battles without a scratch to him or his sword, Mihawk is more than a world famous pirate. Defeating all but one of 50 ships and 5000 men, he deserves the top spot.

Advertise with us
690
likes / shares
FacebookTwitter