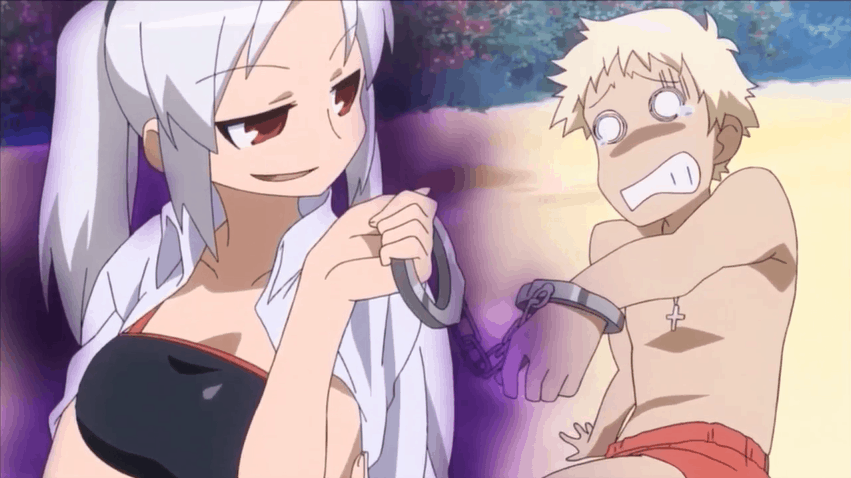 Have you ever enjoyed rewatching any oldies but goodies? Remember a series that was actually decent, but was merely overshadowed by other overrated anime? Not that these are underrated, but they’re not as popular either.

You merely forget them because they were “one hit wonders” and never resurface for a relevant meme. Once you remember them though, a wave of nostalgia will hit you. And fear not! Most of these are a short. Most…

Let me tag you along this joyride and jog your memory of the good old days for some of you “old” folks. As for you younger pipsqueaks? Let me tell you a time when one season meant 24-26 episodes rather than your measly (WEAK) 12-13 episodes nowadays. Oh, and they’re actually complete.

Shinigami no Ballad revolves around Momo, a god of death, and her black-cat-bat-thing (familiar). They travel together taking into care of the deceased’s souls and helping them cross over into the afterlife. Unlike most shinigamis, Momo tries to ease the dying prior to taking their soul.

She also attempts to give the living a peace of mind by conveying final messages from the dead. In this short 6-episode series, witness Momo and Daniel take on a variety of cases where you might actually question yourself as well.

C – The Money of Soul and Possibility Control is exactly what you think it is. A financial crisis in Japan is personified by entrepreneurs and assets in an alternate reality called the Financial District. Midas Money, similar to bitcoins, is what corrupts the entirety of Japan.

How much of your life and future are you willing to bet? In the Financial District, so as long as there’s a tanking economy, you’re able to earn a large amount of money if you win your battles against others. Losing? Prepare for a reduced lifespan and potentially an altered future in real life.

Kore wa Zombie Desu ka? Yes. Ayumu Aikawa mysteriously dies at the hands of a serial killer, but is resurrected by a necromancer, Eucliwood Hellscythe. In comes a magical girl with a chainsaw, Haruna, whom Ayumu ends up taking her powers; Seraphim, Mael Strom, and Sarasvasti, all three being vampire ninjas. 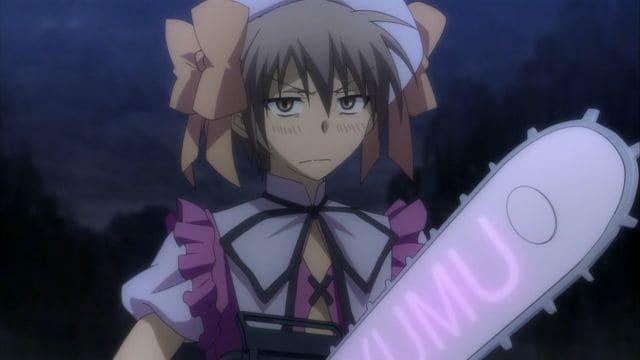 Embark on a journey to fight Megalos and discover the truth behind Ayumu’s death. And enjoy the not-so-ecchi scenes that’ll have you heaving every episode. And vote for your favorite waifu!

12. There HAD to be ONE Isekai

We know this story already. But it doesn’t make Kiba any less good than all the other trash isekais we watch to this day. Zed, sick of living life, is transported to Templar where Shard Casters or magic users are in the midst of a war. Magic users are able to summons spirits with the use of Shards as well as cast their own spells.

Zed learns quick that the spirit that dwells in him is one of six Key Spirits and has the potential to rule the world for good or for bad. Unlike current isekais, Zed isn’t completely overpowered from the get-go. He still has to learn the ropes in order to become a proper Shard Caster himself.

The Midarezaki family is no ordinary family, consisting of a goddess and an ordinary man as the parents of varying children who could potentially be the Child of Enka. They raise these kids to be loving in order to convince any one of them to NOT be some sort of child of destruction as prophesied.

Besides, who doesn’t love an adorable cat waifu in their twenties who can kick butt? And if the opening to Kyouran Kazoku Nikki doesn’t even pique your curiosity in the slightest bit, you have no place in this eccentric family!

EVERYONE in this series are complete foils of whoever their counter is. Dark and Light (literally just by their name). Satoshi and Daisuke (blue and red). Risa and Riku Harada (don’t get me started). Witness the Phantom of Thief be misunderstood for stealing pieces of art that actually have dangerous magical properties.

You don’t see many angel-like series unless they’re a part of some isekai or “I’ma get trapped in a game and become edgy to gain popularity” anime. Enjoy the contrast of multiple characters, their development, and a very fine romance that’s a bit of a slow-burn. And a special hollar to Mio Hio, a side character that makes you hate and love her.

It’s not quite the Michael Jordan Space Jam you expect. Despite hating the sport for paralyzing his sister, Dan JD works towards the sport in order to obtain enough money to treat both his sister’s legs and pay off a debt. Watch Dan JD and his crew take on their dreams of making it big with their Big Foot Basketball mechas in a game of Basquash!

What can possibly go wrong when you mix in basketball with mechas and cute girls into the same things as you? Watch this laid-back and fun sports series if you want the best of both worlds!

Spiral is similar to the series Case Closed and the renowned Sherlock Holmes, but actually complete rather than an ongoing series to this day. Enjoy a few locked-room mysteries as you venture to find Ayumu Narumi’s missing older brother with the school’s journalist, Hiyono Yuizaki.

Ayumu takes on any and all cases involving the “Blade Children” that pertains to his missing brother. Meet each of the five Blade Children and put yourself in Ayumu’s shoes to test your knowledge in their cases.

As one of the few Western animes that deserves more recognition as Cowboy Bebop, had they not diverted severely from the manga, Chrono Crusade is still worth a watch. It is set in America of the First World War, and an organization called the Order of Magdalene is developed in order to pursue and banish all demonic threats encountered.

Unfold into a shady past involving Chrono, a demon himself who works with Rosette in search for her brother who was taken by Aion, another demon with ties to Chrono. Regardless of the divert from the manga, the series still manages to wrap things up in a heart-wrenching scene you won’t forget.

Like the competitiveness that Food Wars: Shokugeki no Soma brings to the table? Yumeiro Patissiere is the sweets version of it! A girl with no background in baking learns and competes just how to create the most creative and delectable sweets you’ve ever seen with the three princes of the school.

Unlike Food Wars, you’ll be tempted to actually try most of these recipes out. So prepare your sweet tooth because this is one of the better, mouthwatering food animes you’ll ever watch.

Congratulations. You just learned a new word. And if that doesn’t make you want to watch Canaan… well, it’s in there, alright. A Middle Eastern assassin named Canaan rivals her former acquantained assassin partner Alphard in an on-going operation set in Shanghai, China. She reunites with a friend, Maria, and tags her along a string of violent events that occur.

Witness the tragic rivalry begin and end in flames over a terrorism conference, Canaan’s ability to use Synesthesia during combat, and what the outcome of Shanghai may be with the success or failure of this operation.

4. Is That You Hannah Montana?

Mitsuki Kouyama has only one year left to live after Shinigami Meroko and Takuto visit her one day. They grant her wish to become a singer disguised as a more mature, blonde version of herself. Despite having throat cancer and her relatives being completely against auditioning, Mitsuki rises to the top.

Full Moon wo Sagashite brings a whole new light to what a shinigami is and demonstrates what vocal talent truly is in the most memorable songs you’ll ever listen to. If you liked the mellow tone that Guilty Crown’s songs had to offer, you’re sure to like this series. This show is a bit of a tear-jerker as well, but rest assured it’s in a good way.

Shinrei Tantei Yakumo, of course! Ever skeptical about the afterlife? The supernatural? Yakumo Saitou not only proves to be the real deal, but he takes it a step further to help those seeking assistance. Once a college acquaintance Haruka Ozawa seeks Yakumo’s help on a past tragedy, stick around to experience varying supernatural cases!

It’s not everyday someone is born with an unnatural red eye to be able to speak and interact with the spirits of the afterlife. Anyone would want that kind of reassurance and peace of mind from someone who speaks for the dead.

If you’re looking for a harem anime similar to Quintessential Quintuplets, Futakoi is still relevant! Follow Nozomu Futami as SIX PAIRS OF TWINS, each with their own varying personality, fight for this one lucky boy’s love. It’s your typical Rom-Com added with Slice of Life and multiple twins to choose from.

Futakoi Alternative differs quite drastically from the former series, and is by no means a sequel. The series is its own series with no real genre to fit into, almost giving off the same vibe as The Melancholy of Haruhi Suzumiya. It follows Rentaro Futaba and the Shirogane twins in episodes that vary from each other every step of the way.

1. A Lighthearted Version of Cowboy Bebop

You know you wanted to cut a blue blazer in half, strap on four donuts to your chest, and spike up your hair to cosplay Train Heartnet – AKA Black Cat. The former assassin turns his outlook and mission in life with the Apostles of the Stars to fight for a world revolution meant to take down Chronos, an all powerful organization ruling over a third of the world.

Follow Train, Sven, Eve, and Rinslet on an action-packed joy-ride to stop a man named Creed from ruling over the world via nanotechnology that’ll render him immortal. In addition, don’t tell me the opening is skippable. It’s one of the catchiest openings you SHOULDN’T ever forget!

From the author that created Higurashi When They Cry, immerse yourself in a blend of a bloody locked-room mystery and the supernatural.

Although not underrated, this magic action-packed shonen definitely deserves a re-read (or re-watch, if you’re up for 64 episodes).

Advertise with us
2538
likes / shares
FacebookTwitter