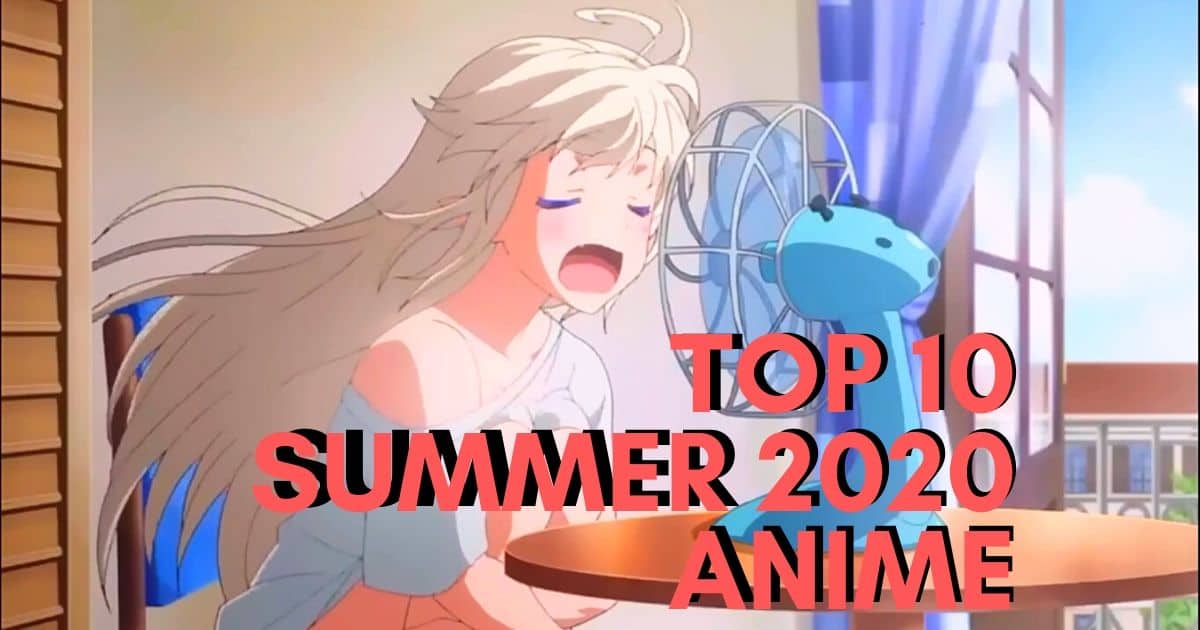 July is here, so do the start of the new season of upcoming anime series!! With the temperature is rising, the same goes with our anticipation this summer as we are blessed with sequels, anime adaptations and originals alike.

There are some of the series that are originally planned to be released last spring, due to our “current world affairs”, moved to this season. And finally, the long wait is over! Summer 2020 has blessed us with series that we can’t just get enough of. So, grab yourself some chips and soda as we list down the top 10 upcoming anime this Summer 2020. 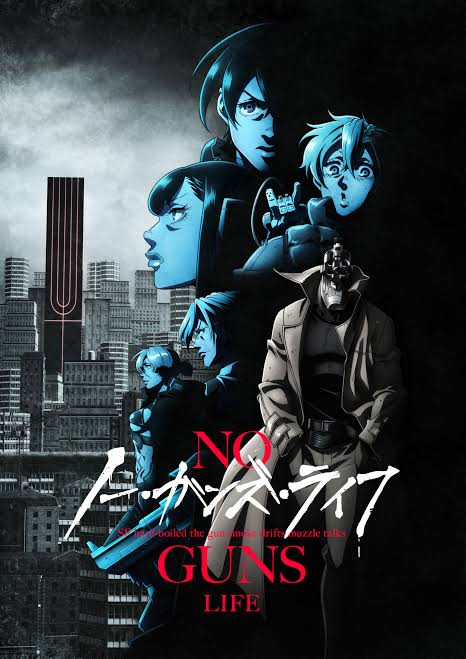 This is the second season of the anime of the same title that was aired last Fall 2019. It was originally scheduled last Spring, but postponed due to production issues. Fortunately, we don’t have to wait no more this summer.

Inui Juzo, an ex-soldier who fought on a chaotic war, had his own body modified as a deadly cyborg called “Extend”. His head was turned into a gun and designed to have someone shoot it from behind. Unfortunately, he has no recollection what was his life and body before he undergone modifications. So, for the time being, he struggles to make a living as a Resolver, someone who takes cases involving Extends, on the dark alleys of the city. As the time goes by, he found himself  sinking deeper into the gritty and corrupted underground of this cyberpunk world.

9. The Misfit of Demon King Academy 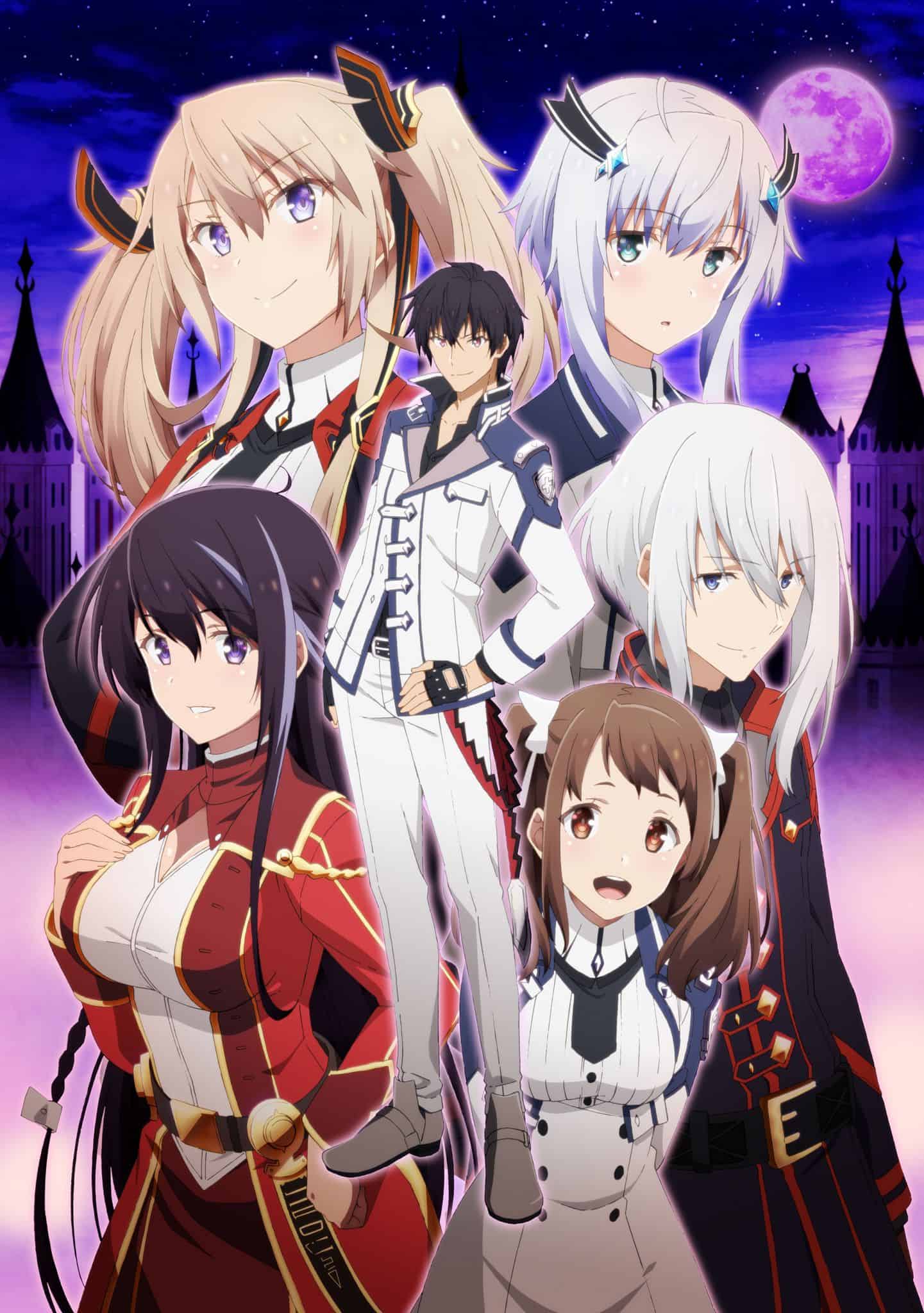 If you like harem and an OP protagonist (where you can place yourself) and a fantasy setting, this series might be of your liking. By the way, if you wonder this is an isekai, no it is not, despite the main character being reborn. But take note, he was reborn on the same world. And that is not isekai.

Anos Voldigord, a tyrannical Demon King that slaughtered humans, spirits, and even gods alike, has grown bored of the eternal carnage he witnesses every day. One day, he let himself killed by the Hero, bringing peace to the world. After 2000 years, he was reincarnated with his full knowledge and capability. But to his surprise, the academy that trains and educates candidates, who are believed to be reborn among them, as the new Demon King… sees him as a misfit!

As the former Demon King, he finds it frustrating how weak his descendants because of how they became too accustomed with peace. This even resulted to have all of their magic declined to the extreme. Little did the demon world know, everything even the hierarchy, will be shaken up by his mere presence. 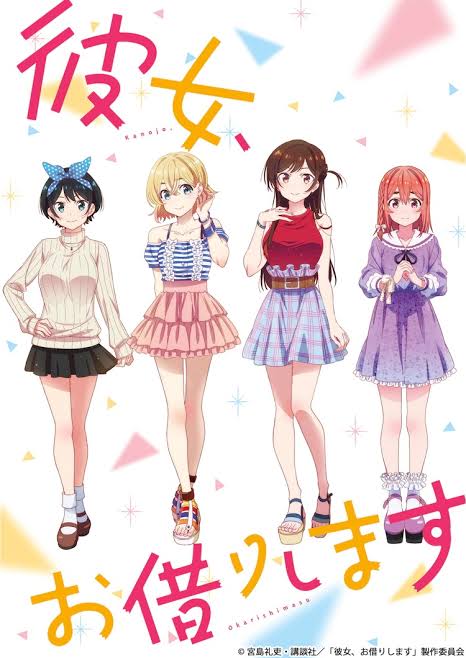 In Japan, there are some rentals that we might find weird, like renting a “mom”, lap pillows, and even friends (of course on the wholesome side, you sickos). But who are we to judge? Aren’t some people simping for e-girls nowadays? Moving on, the title itself says how “absurd” this anime is.

Kazuya Kinoshita, a 20-year-old failure of a college student, once dumped by his own girlfriend after kissing her. Out of spite, he “rents” a girl for a date. And something “real” bloomed out after just a single rental. With his meeting with Chizuru Mizuhara, a beauty nonetheless, comes a rom-com filled with love and excitement!

7. The God of High School 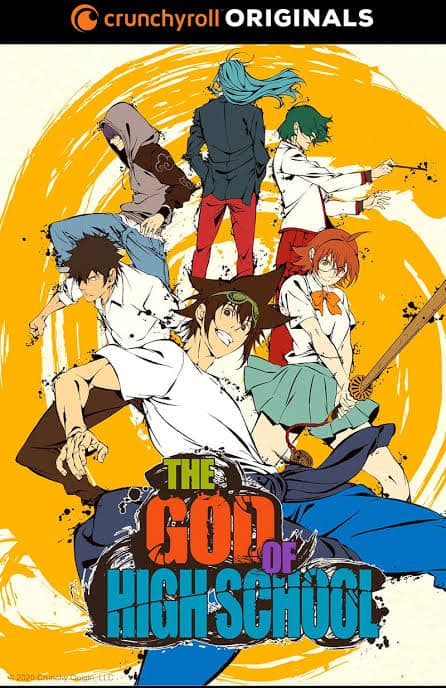 On recent years, anime adaptations of manhwa is on the rise, like last season’s “Tower of God”. And for this summer, the world of anime proudly presents one of the most anticipated manhwa of recent times, “The God of High School”.

Jin Mori calls himself as the “Strongest High Schooler”. And it seems he has to prove himself once again when he received an invitation to participate in “God of High School”, a tournament that aims to determine who the strongest high schooler of all is. If ever he wins, he can have any wish granted. With this at stake, all of the contenders fight for their hardest for their own wishes. This starts a chaotic battle that pits the strongest among the strongest. 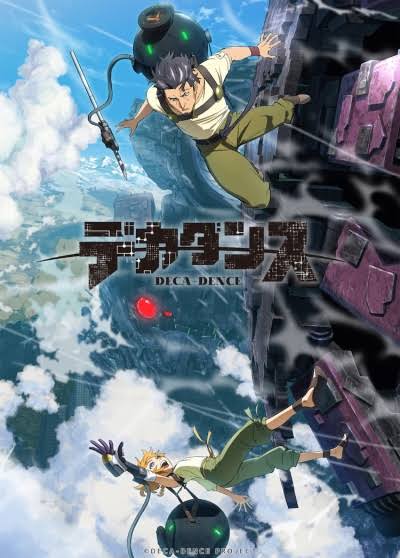 This is an anime original, so I believe this will bring us a lot of surprises for all of us. And to be honest, anime-only’s might find this blissful for there are no manga and light novel readers to spoil this series for them. LOL

Humanity has been pushed to the brink of extinction with the appearance of unknown life forms called Gadol. As last line of defense against these abominations, people started to live on a 3000 meter-high mobile fortress called Deca-Dence. Here, people are divided into two, the Gears (who fight against Gadoll daily) and the Tankers (the non-combatants).

One day, Natsume, an upbeat and optimistic Tanker who dreams one day she can become a Gear herself, met a realist and pessimist armor repairman, Kaburagi. With this meeting comes repercussions that will change the world’s future forever. 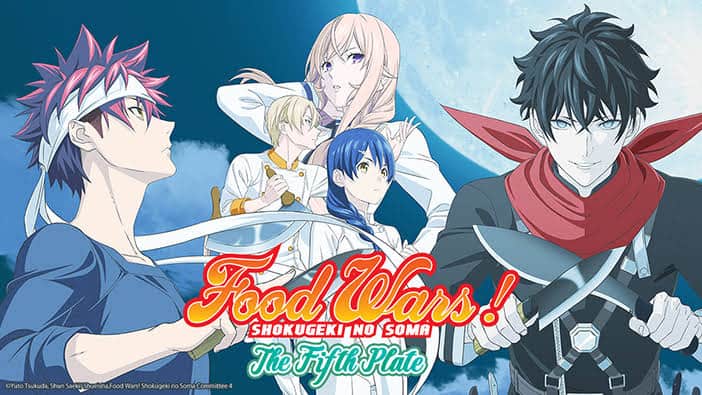 For roughly half a decade, Food Wars makes not only our eyes enjoy but also our imagination with how delicious the dishes they cooked might be. Now we got the continuation of the abruptly postponed series that is meant to be started last April. Now let’s feast our eyes for what this season might offer to us!

Souma has advanced a grade and finally became the First Seat at the Totsuki Ten Masters Council. After that, he received an invitation to a world-class cooking tournament known as “BLUE”, one of the most prestigious gastronomic competition that will bring unprecedented fame to any young chef that will reach its pinnacle. With the arrival of the new contenders come challenges that have never been seen before. This is the beginning of the shokugeki that will determine the new flag bearers of the culinary world! 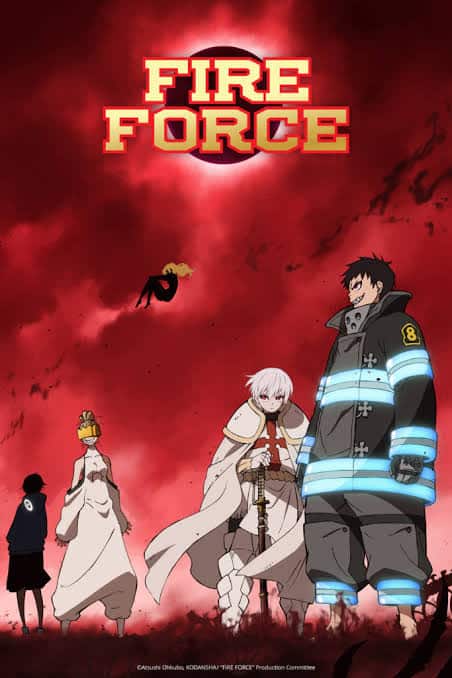 Oh yeah. Fire Force, a series where firefighters literally fight fire. Isn’t that badass?! This series is really a treat to behold as it features amalgamation of Buddhism, Hinduism, Shintoism, Christianity, science and the alternate modern world. If you haven’t started the series yet, go watch it now and you are really missing up something.

A series of Spontaneous Human Combustion plagues the clockwork metropolis of Tokyo and paralyzed it with fear. The Fire Force, a special firefighting team, is established to investigate and eradicate any spontaneous combustion at a moment’s notice. Eventually, Shinra, a boy who possesses a unique ability to propel himself forward like a rocket with the bursting flames coming out from the soles of his feet, joined the force. As they go deeper on the root cause of things, will they be able to pinpoint and stop the source of this strange phenomenon before the city burn to ashes first or not? 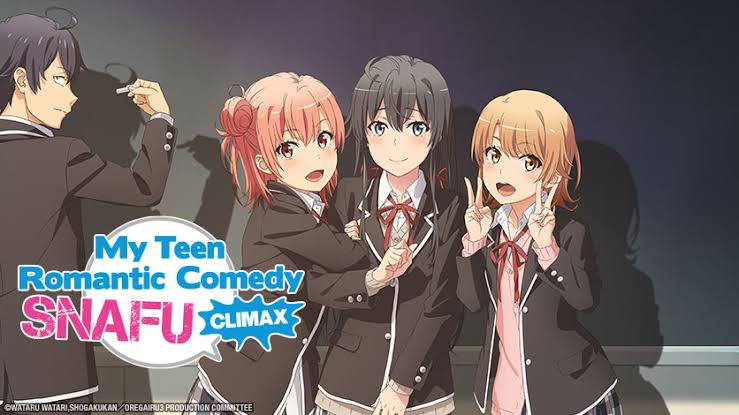 After roughly 7 years from the first season and 5 years for the sequel and some OVAs, we finally got the third season of the much awaited season of SNAFU!! If you haven’t watched the prequels, you have roughly 3 weeks to binge watch it now!! What are you waiting?! GO! GO! GO!

SNAFU comes back with the long awaited resolution to the suspenseful cliffhanger of the second season. As the Service Club band together to host the school prom, Hachiman, Yukino, and Yui will not be able to bring their thoughts and feelings that easily. Will they be able to put these thoughts into words and understand one another before the eminent breaking apart of the club? 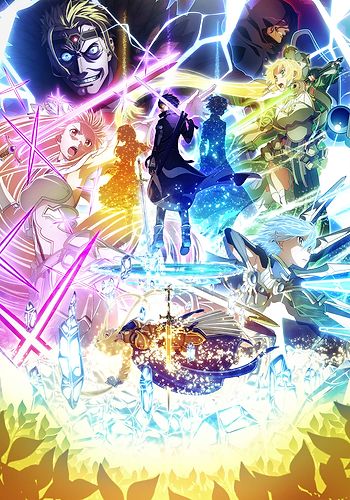 The beginning of the “isekai craze” of the last decade started on 2012 with this series, Sword Art Online. Despite being labeled by some as “trash” it cannot be denied that it is one of the most successful franchises of the last eight years. So successful in fact, that aside from its original light novel series, it spawns anime sequels, a spin-off, manga adaptations, and video games. This is originally lined up for Spring 2020 but moved this summer due to the same production issues other anime have encountered.

Kirito is recovering after his battle against Administrator Quinella and he was brought by Alice back to Rulid Village, his home town. In the meantime, she rallies the people of the Human Empire to defend against the looming threat of the Dark Territory.

Meanwhile, Asuna eventually dives down into Underworld to save Kirito and prevent the enemies from taking Alice. But the invaders got an ace on their sleave. They have tricked the American gamers in joining outnumbering the Japanese due to the time difference on both sides of the globe, with Japan on its nighttime. Ultimately, leading on a war that crosses both reality and the underworld. 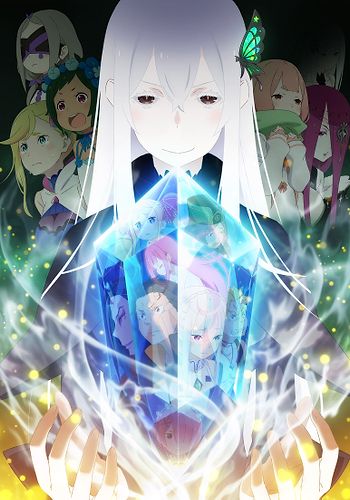 Subaru has literally encountered countless times of death before he is able to stop the Demon Beast of the Mist, the White Whale, and the Witch Cult’s Sin Archbishop of Sloth, Petelgeuse Romanee-Conti. To his demise, after meeting with his beloved, Emilia, he then discovered that Rem has fallen victim to the White Whale’s Fog of Elimination while he is on a death loop. Now, they both have to face the reality that they never dreamed of.

The second part of Re:Zero S2 will be aired next year.

So far guys! That’s all for the anime of this season. I do hope you find these series enjoyable as well as your time this summer. That’s all! ARRIVEDERCI!!

Advertise with us
1596
likes / shares
FacebookTwitter