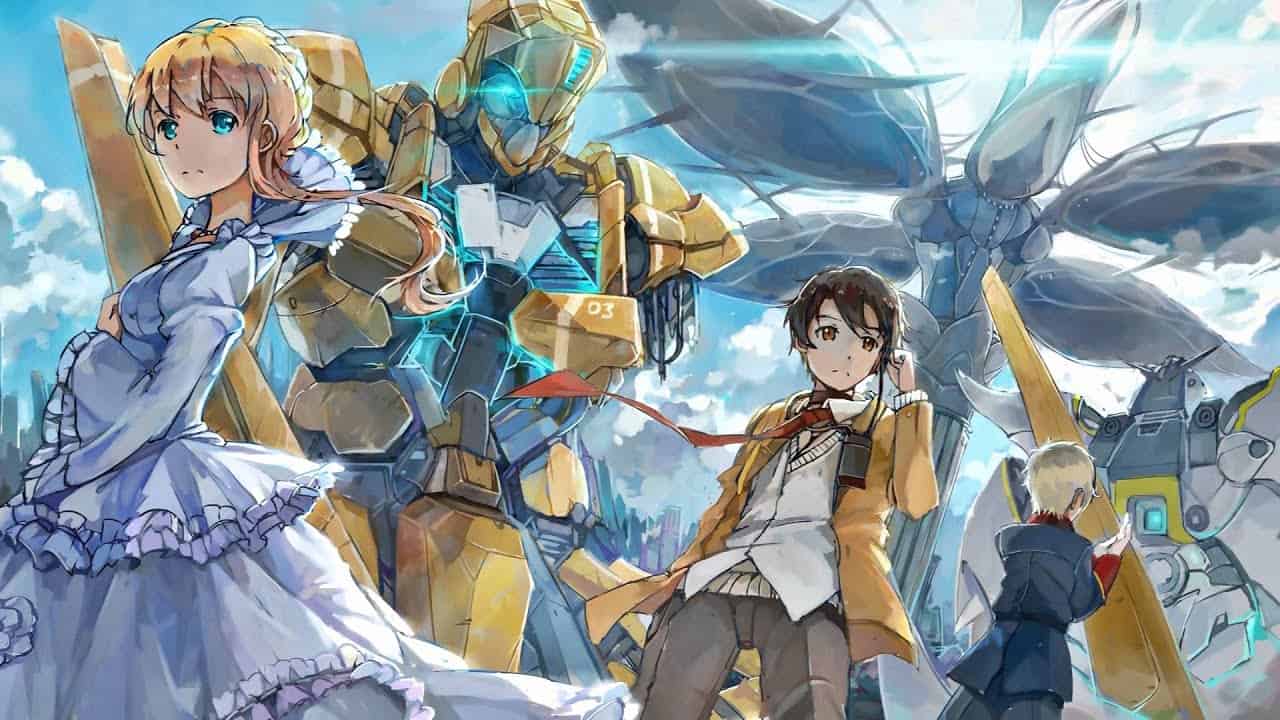 Everything So Far about the Kyoto Animation Studio Incident 2019

Mecha is one of the most distinctive genres in Anime, both in Japan and the West. As one of the defining genres of the medium, mecha has been an important part of anime practically since the beginning with seminal titles like Tetsujin 28-go and continues to be popular to this day.

Here are the best Mecha Anime of all time, You can pick your favorite one out of these 10!

In 1972, an ancient alien hypergate was discovered on the surface of the moon. Using this technology, humanity began migrating to Mars and settling there. After settlers discovered additional advanced technology, they broke away from Earth and the Vers Empire was founded, which claimed Mars and its secrets for themselves. Later, the Vers Empire declared war on Earth, and in 1999, a battle on the Moon’s surface caused the hypergate to explode, shattering the Moon and scattering remnants into a debris belt around the planet. 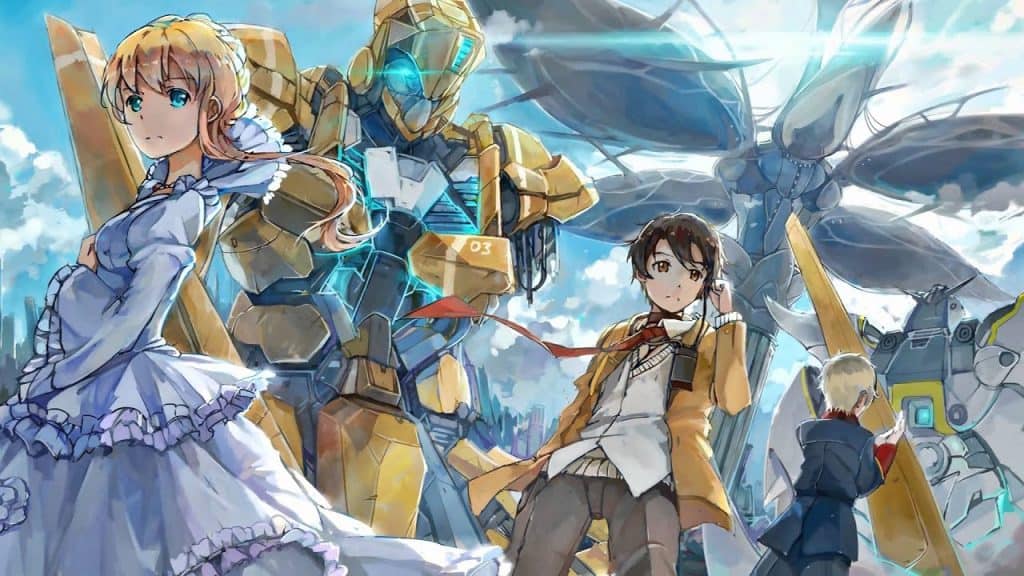 Cut off from Mars, the remnants of the Vers Imperial Army established several massive orbital space stations within the debris belt and a ceasefire was established. 15 years later, in 2014, an attack on the Vers princess during a peace mission causes the Empire and its 37 clans of Orbital Knights to launch a new attack on Earth, this time determined to conquer it once and for all.

Macross has always been a classic mechaa anime, and to this day there are still thousands of fans everywhere supporting the franchise. Macross Frontier is considered to be the favorite out of the Macross franchise due to its deep plot, and exciting cast of characters. The premise of the story takes place in the distant future where humanity is at war with the powerful Zentradi, who are out to destroy everything in their path. Their overwhelming threats forced much of humanity to escape and find refuge in a much safer environment. The Macross Frontier is built in order to protect the rest of humanity, but when Sheryl makes her appearance on board, so do the new enemy Vajra which creates a new stage of panic. Alto and the rest of his team must work together to put a stop to the ruthless Vajra and uncover the truth behind Sheryl’s mysterious history. 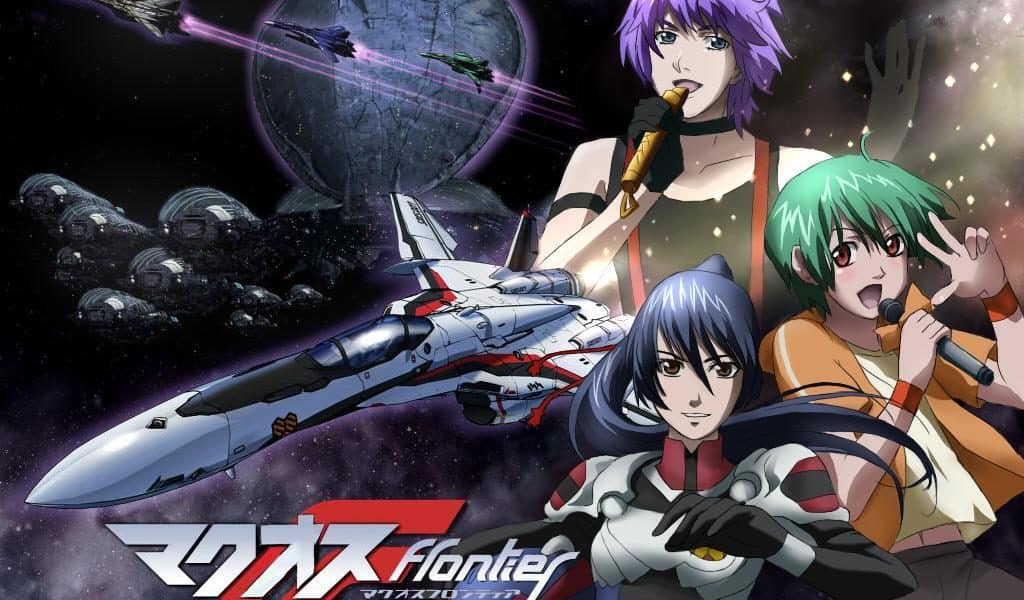 This received a spot on our mecha/robot list because much anime always brings something dramatic to the screen, and so we become glued to all that’s happening. Also, the story behind Sheryl and the Vajra outbreak sounds interesting, since there is certainly something brewing that we are just not so sure about. What really attracted us was the art style which combined with a more retro feel much like the past Macross series, and also a more modern feel with regards to character design. This is must watch for anyone stoked for cute girls in flashy outfits!

In the backwater town of Bellforest lives a 14-year-old boy named Renton Thurston. He desires to leave his home behind and join the mercenary group known as Gekkostate, hoping to find some adventure to brighten up his mundane life. However, stuck between his grandfather’s insistence to become a mechanic like him and the pressure of his deceased father’s legacy, the only excitement Renton finds is in his pastime of riding the Trapar wave particles that are dispersed throughout the air, an activity akin to surfing. 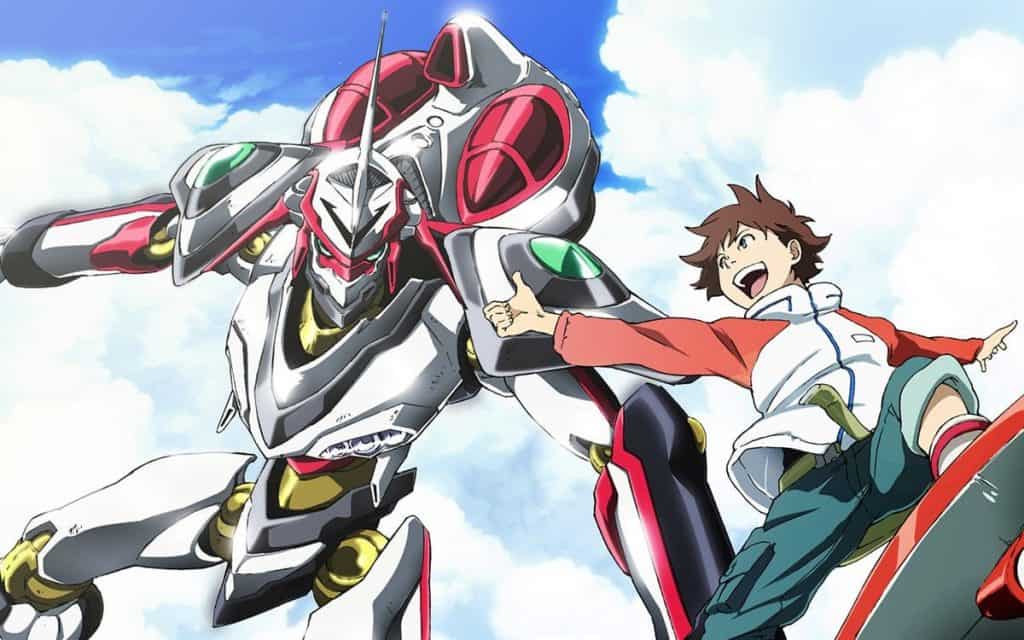 In the backwater town of Bellforest lives a 14-year-old boy named Renton Thurston. He desires to leave his home behind and join the mercenary group known as Gekkostate, hoping to find some adventure to brighten up his mundane life. However, stuck between his grandfather’s insistence to become a mechanic like him and the pressure of his deceased father’s legacy, the only excitement Renton finds is in his pastime of riding the Trapar wave particles that are dispersed throughout the air, an activity akin to surfing.

The Big O is set in the fictional city-state of Paradigm City. The city is located on a seacoast and is surrounded by a vast desert wasteland. The partially domed city is wholly controlled by the monopolistic Paradigm Corporation, resulting in a corporate police state. The paradigm is known as “The City of Amnesia”  because forty years prior to the story, “The Event”  destroyed the world outside the city and left the survivors without any prior memories. 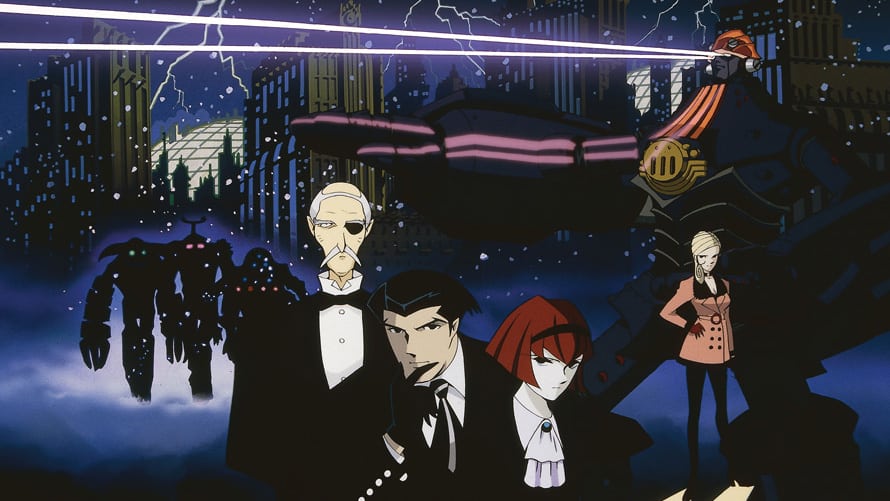 The city is characterized by severe class inequity; the high-income population resides inside the more pleasant domes, with the remainder left in tenements outside. Androids coexist with the human inhabitants of Paradigm City; while they are rare, they are sufficiently numerous that Denizens of the city do not consider them unusual.

In Eve no Jikan, The Three Laws of Robotics are held above all else in a world where android housekeepers have become commonplace. Although they look human, they are treated the same as lesser technology such as toasters and alarm clocks. Not everyone feels this way, however. Android sympathizers, known as “android-holics,” have been labeled as heretics and problematic members of society. 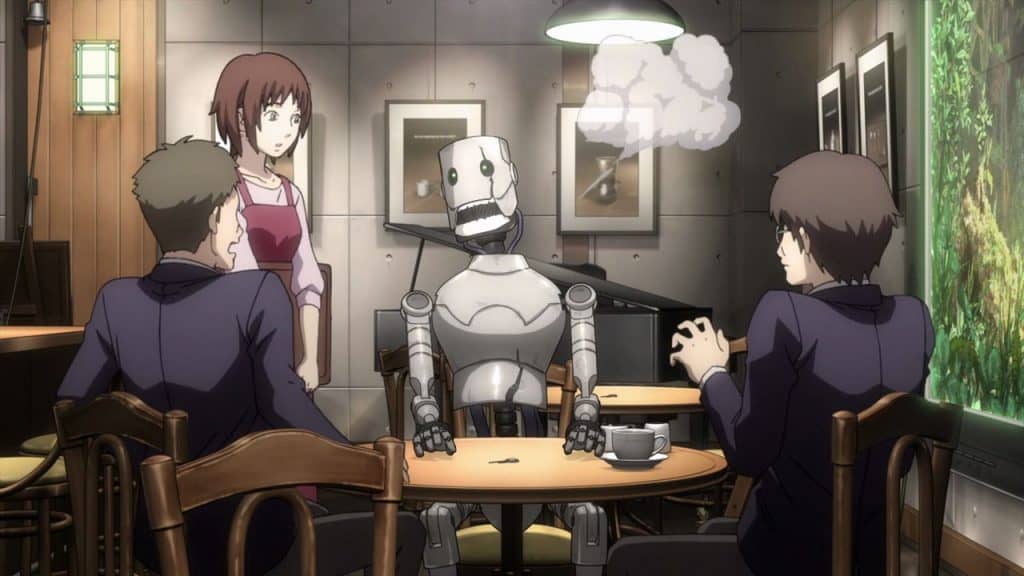 Rikuo Sakisaka was raised to believe and uphold society’s tenets about androids and is perfectly aware they are not human. Then one day, he finds abnormal data in his family android’s activity logs. This leads him to a café that has only one rule that its clientele must follow: there must be no discrimination between humans and androids inside. Curiosity drives Rikuo to discover more about this strange place and its regulars, even though he has no desire to befriend machines.

Simon and Kamina were born and raised in a deep, underground village, hidden from the fabled surface. Kamina is a free-spirited loose cannon bent on making a name for himself, while Simon is a timid young boy with no real aspirations. One day while excavating the earth, Simon stumbles upon a mysterious object that turns out to be the ignition key to an ancient artifact of war, which the duo dubs Lagann. Using their new weapon, Simon and Kamina fend off a surprise attack from the surface with the help of Yoko Littner, a hot-blooded redhead wielding a massive gun who wanders the world above. 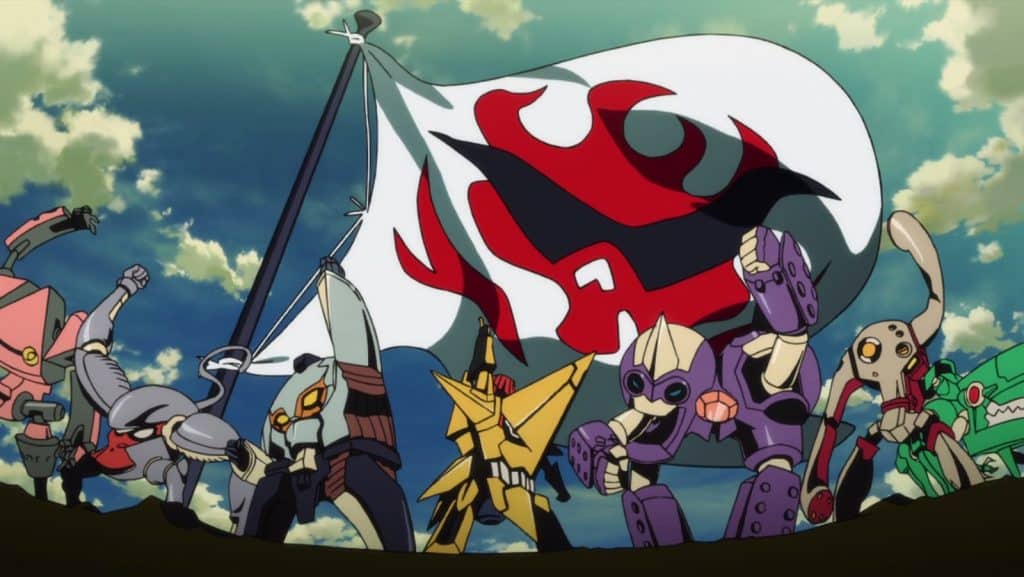 In the aftermath of the battle, the sky is now in plain view, prompting Simon and Kamina to set off on a journey alongside Yoko to explore the wastelands of the surface. Soon, they join the fight against the “Beastmen,” humanoid creatures that terrorize the remnants of humanity in powerful robots called “Gunmen.” Although they face some challenges and setbacks, the trio bravely fights these new enemies alongside other survivors to reclaim the surface, while slowly unraveling a galaxy-sized mystery.

In the distant future, mankind’s dependence on fossil fuels will lead to their complete depletion, an energy crisis, unlike anything the world witnessed. Out of retaliation and fear, humanity began focusing on an alternative source of energy: solar power. Different nations have united together to form three major factions—the Union of Solar Energy and Free Nations, the Advanced European Union, and the Human Reform League. Each of these sectors has access to a solar power generator, which gives them limitless energy. 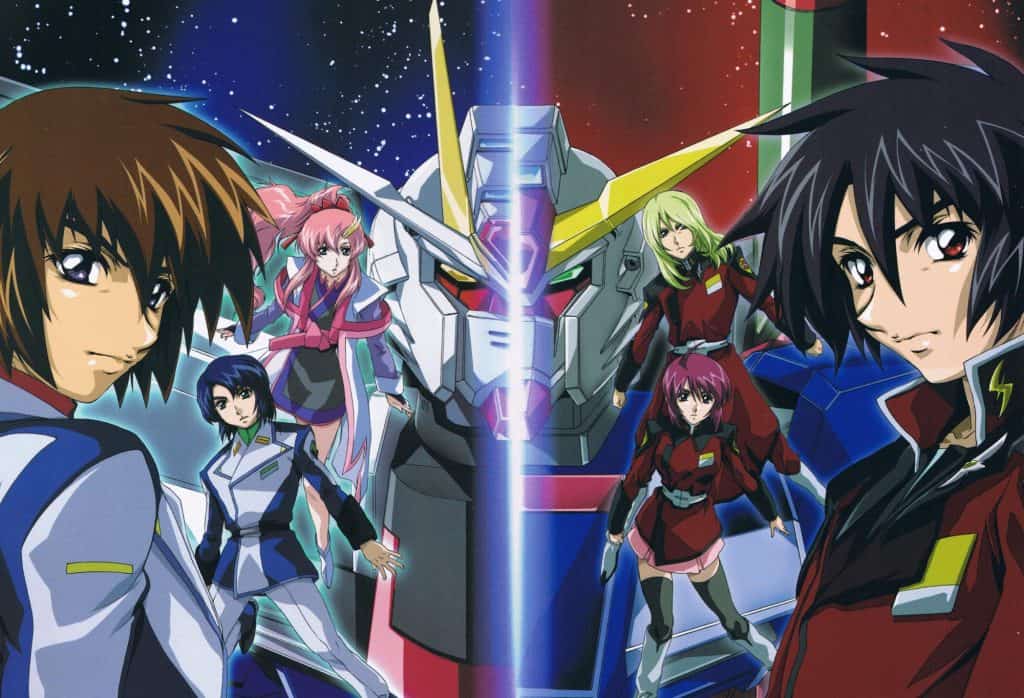 Mobile Suit Gundam 00 follows the story of Celestial Being’s Gundam Meisters Setsuna F. Seiei, Lockon Stratos, Allelujah Haptism, and Tieria Erde. These four dive into the devastating battle between the three superpowers to accomplish their goal of changing the world.

The characters are definitely the best about this anime since they are almost all developed and interesting. There are a lot of them, but even some mirror characters get good development and back story. I liked most of the VI Britannia family and obviously Lelouch and CC. 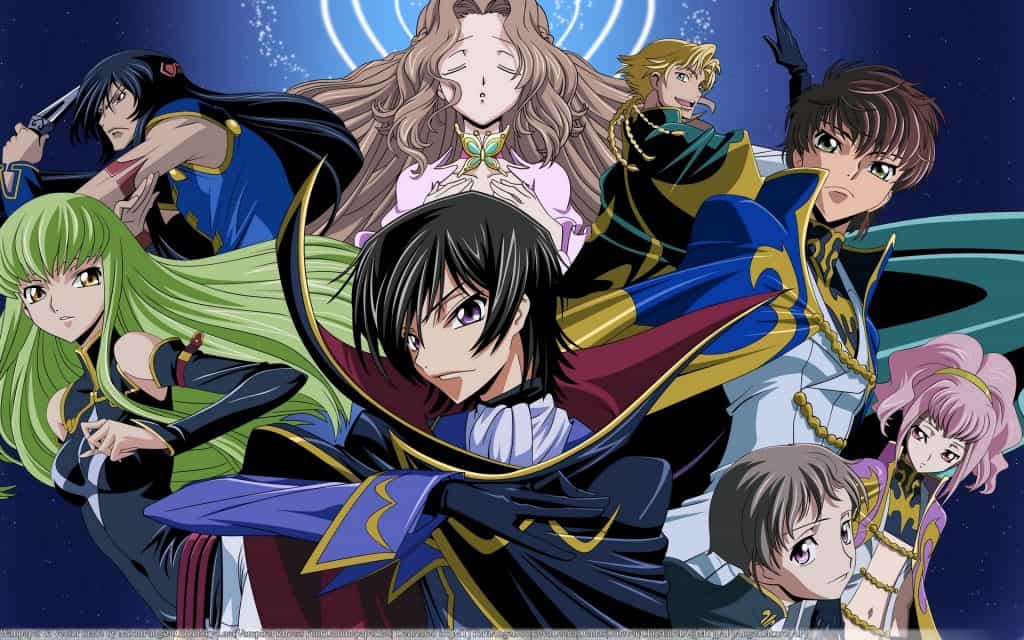 It’s actually quite nice to see that the story started since I want to avenge my mother and create a world where my sister can be at peace and happy. Yet, it turned into world domination conquest with a lot of twists and turns that leave you to be wondering what will happen next because you don’t know what is happening anymore. The animation and art are pretty good, but nothing too much outstanding, but it does the job. The soundtrack, on the other hand, is freaking cool and I still listen to it sometimes.

It follows seventeen-year-old Sousuke Sagara who is tasked by the organization Mithril with protecting a Japanese schoolgirl named Kaname Chidori, who is being targeted by enemy agents due to her incredible ability to create advanced machinery. The only problem–apart from people trying to kidnap Kaname is that Sousuke is about as well-adjusted as a feral child, so navigating high school could prove even trickier than saving the world. 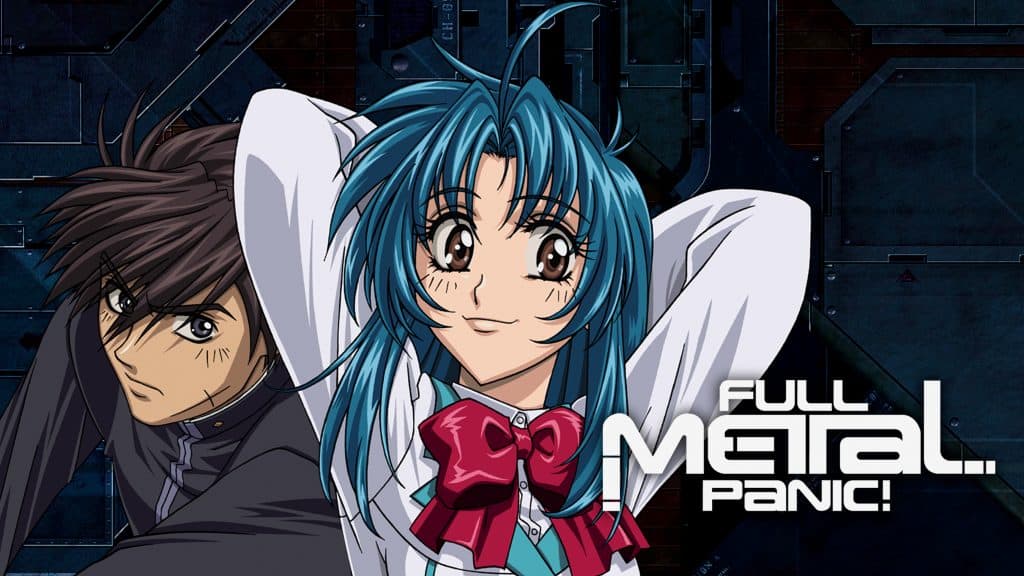 Full Metal Panic! Interestingly blends elements of school comedy with sci-fi action surprisingly, this combination works quite well and makes the series both memorable and extremely enjoyable to watch. Full Metal Panic! Balances jumping between intense mech battles to Kaname dealing with Sousuke’s wacky military antics in high school in a way that enhances both aspects of the series and the overall experience because of the variety. So if you like your high school comedies tempered with giant robots kicking the ever-loving crap out of one another, this is the anime for you.

1. Evangelion – Watch both the series and movies

You already knew this would take the number 1 spot. And if you don’t personally agree with this, then that’s probably because you watched the Netflix version…

In the year 2015, the world stands on the brink of destruction. Humanity’s last hope lies in the hands of Nerv, a special agency under the United Nations, and their Evangelions, giant machines capable of defeating the Angels who herald Earth’s ruin.

Gendou Ikari, head of the organization, seeks compatible pilots who can synchronize with the Evangelions and realize their true potential. Aiding in this defensive endeavor is talented personnel Misato Katsuragi, Head of Tactical Operations, and Ritsuko Akagi, Chief Scientist. 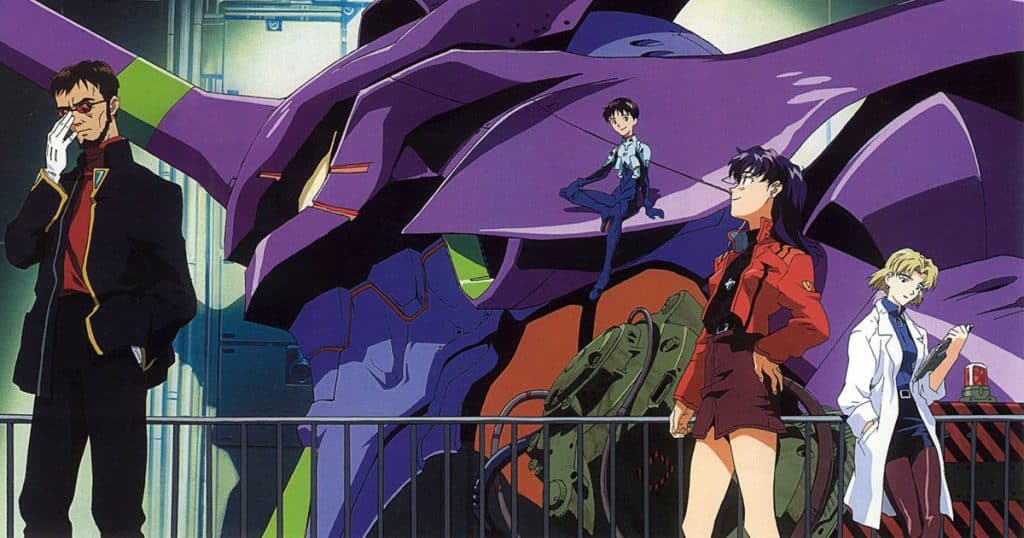 Face to face with his father for the first time in years, 14-year-old Shinji Ikari’s average life is irreversibly changed when he has whisked away into the depths of Nerv, and into a harrowing new destiny—he must become the pilot of Evangelion Unit-01 with the fate of mankind on his shoulders.

So which one is your favorite Mecha Anime? Comment your opinions below

Advertise with us
1473
likes / shares
FacebookTwitter