The Yakuza’s Guide to Babysitting Anime Reveals Cast and Staff

Since 2018, Orylab has held several successful pop-up cafes around Tokyo City that were attended by over 5,000 people. In 2021, Orylab opened up its first permanent flagship cafe in Nihonbashi – the Dawn Avatar Robot Cafe.

Whilst the previous pop-up cafes only served drinks, this permanent cafe will be serving a range of drinks and foods, much like a regular cafe – only, you will be waited on by OriHime-D!

When you arrive, don’t be alarmed if you see many robots waiting around. It might seem like a scene out of a futuristic anime, but these robots are definitely less Gundam and more Baymax. 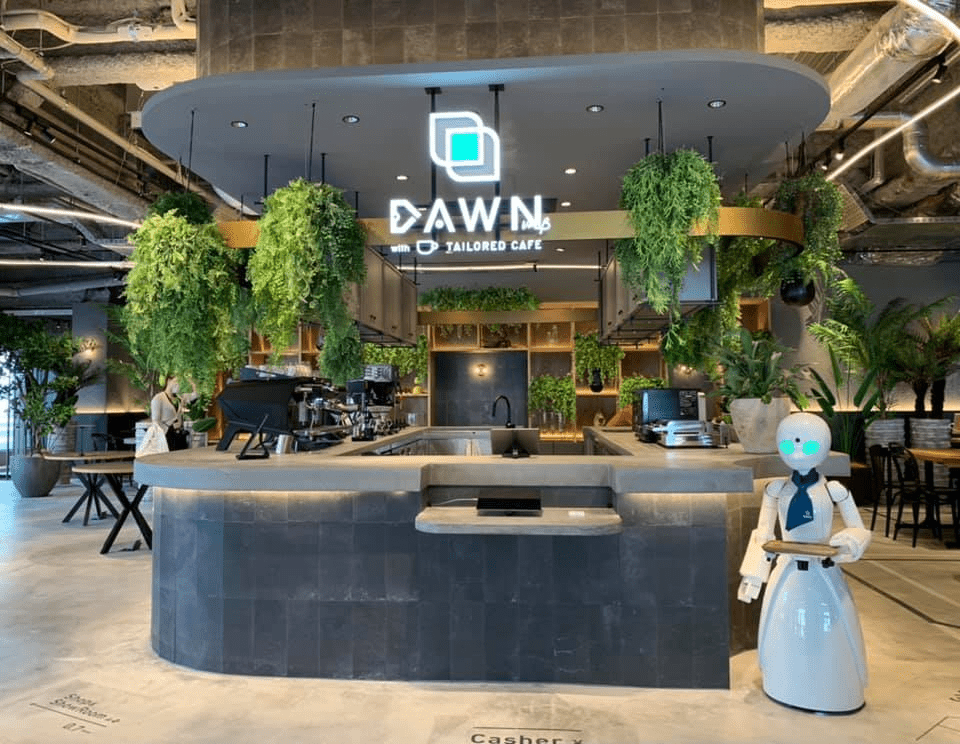 There will be a small number of human staff members but the majority of the operations will be run by Orihime-D. You’ll have them greeting you at the front door, taking you to your seats, taking your order – pretty much every service that a waiter provides at a cafe!

The biggest difference with Orihime-D from any robots that you’ve encountered before is just how chatty they are. Staff members log onto the robots from all over the country and you’ll come across characters from all walks of life. This humanistic side of being served by robots makes the experience one you’ll never forget.

The menu includes cafe-favorites such as beef burgers, steaks, curries, and more. The desserts are more seasonal, taking into consideration the freshest ingredients available during that time of the year.

There are pre-made drinks and foods that you can pick up and dine on in the lounge area, however, if you want freshly made coffee, there’s that too! 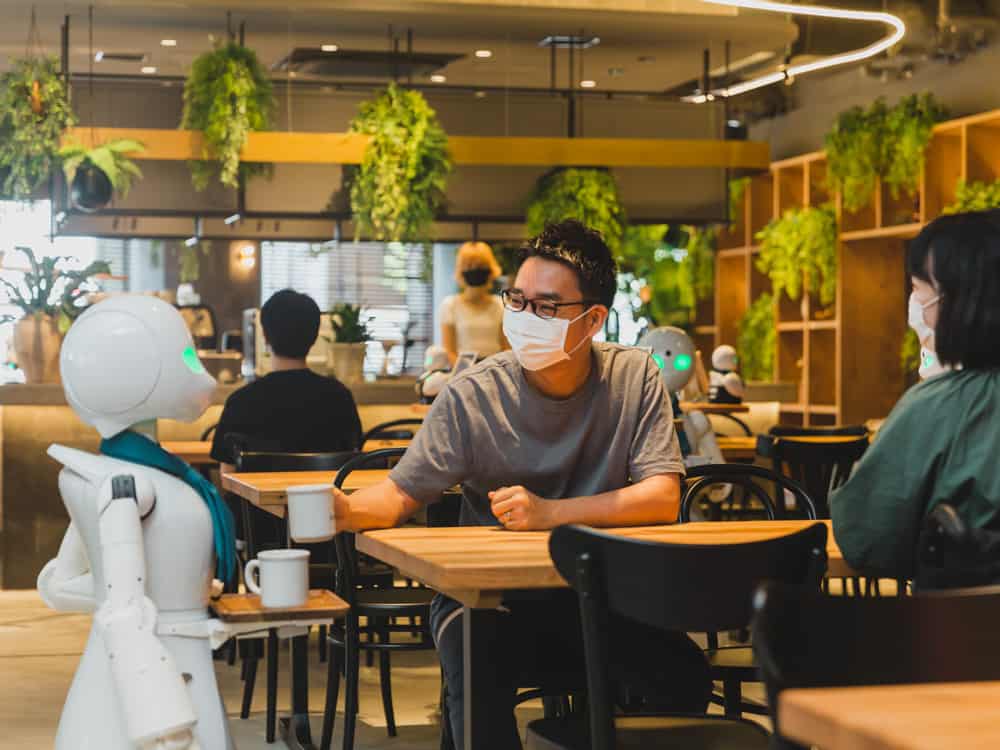 Head on over to the bar where OriHime-D will take your coffee order and prepare your coffee. You can choose the coffee (or chocolate!) that you’d like and watch as it is freshly brewed in front of you.

This all sounds almost too good to be true, and something you’d expect to see “in the next 10 or 20 years”, but it’s real and it’s happening now. From past successes, it’s now known that this model will definitely be going far into the future.

From the novelty of being waited on by humanoid robots, to the social liberation for people with disabilities to interact in a way that works for them, Dawn Avatar Robot Cafe is the future of a barrier-free world.

How Did This Café Come About? 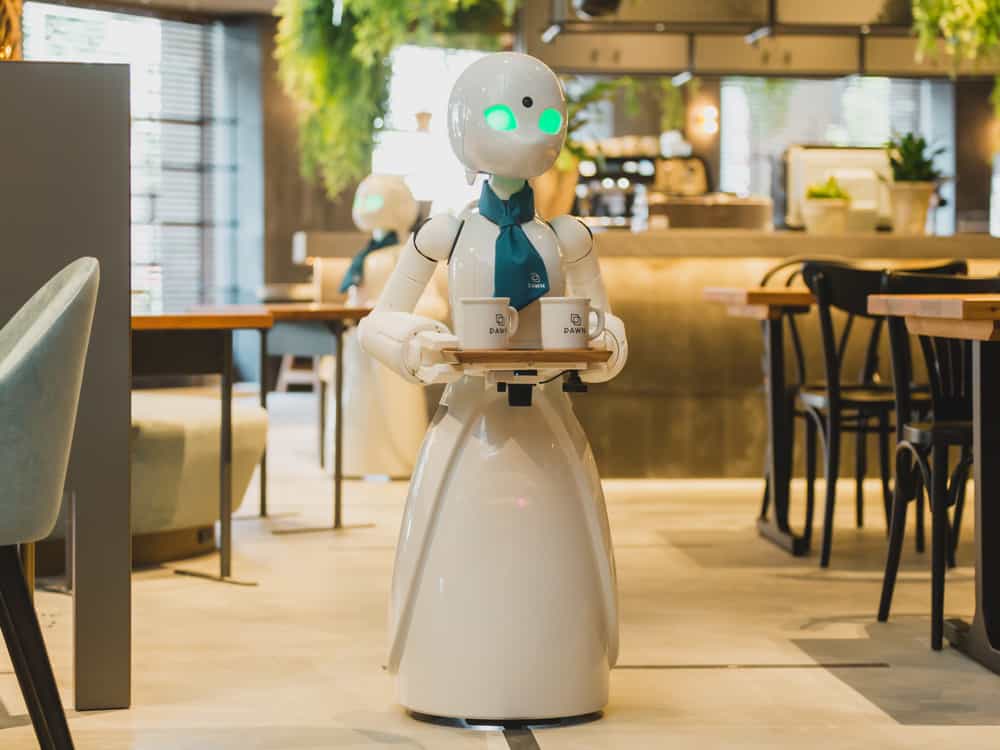 Imagine a world that is barrier-free and inclusive to all human beings; where people can meet whomever they want, however they want, and never feel completely isolated.

Whilst it may seem light-years away at the moment with everything going on in the world, certain people are making huge strides towards that dream, and one of them is none other than Kentaro Yoshifuji, CEO of Ory Laboratory Inc. (aptly known as Orylab).

In 2018, he experimented with the world’s first-ever cafe controlled by robots.

If you’re imagining the wild and crazy Robot Restaurant in Kabukicho, where the employees dress up in shiny and colorful costumes, beating drums and fighting with animal robots all whilst singing and dancing, you’ve got the wrong one.

Dawn Avatar Robot Cafe features real humanoid robots named OriHime-D who act as regular servers for the cafe. They do everything from greeting customers to serving food and drinks to even having delightful conversations.

You see, these robots are actually operated by real humans who remotely control the robots via the internet!

Fuelled by the isolation he felt whilst being prevented from social interactions for the better part of three years earlier in his life, Yoshifuji felt compelled to develop a method in which people who find it difficult to participate in society can contribute and feel valued.

He subsequently developed robots that can be controlled literally through just eye movements and simple gestures. This means that even people who are immobilized have the option of connecting to the robot and operating it. 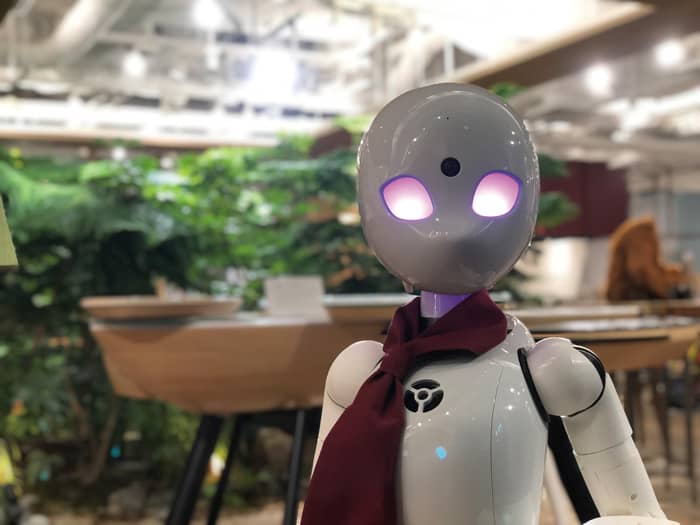 The OriHime-D robots are 120cm tall, are equipped with a camera, microphone, and speaker, and allow the operator (also known as the pilot) to speak to customers and receive orders whilst moving freely around the restaurant.

Ultimately, OriHime-D becomes an avatar for those operating it.

This all sounds insanely awesome and truly standard for Japanese innovations, and it really is!

Hype and glamour aside, it has proven itself to be a wonderful method to empower people out of isolation. Those with disabilities including physical disabilities, seniors, those who need to stay at home, and even those who are bed-bound can easily connect through OriHime-D.

The entire experiment and cafe has successfully shown the world that there is a model out there where people with disabilities can more easily find employment and work.

In a country with an aging population like Japan, this is a welcome direction for the future of the workforce.