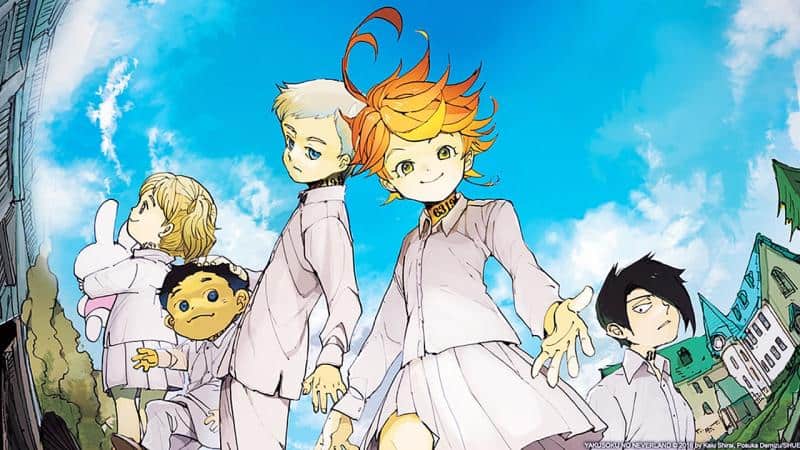 Fans of The Promised Neverland (Yakusoku no Nebarando) were thrown into a sad mood after news of the postponement of the show’s second season was announced.

The announcement did not come as a shock, neither was it surprising as we all are now too aware of the effects of the coronavirus pandemic on anime production. A lot of other anime and live action movies have been affected.

The science fiction, thriller and dark fantasy anime was one of the major successes of the anime community in 2019, performing above expectations and winning a few awards in the process.

The Promised Neverland season 2 was originally supposed to be released in October 2020, but has now been delayed due to the Covid-19 and will now see a premiere of January 2021.

The planned rerun of the highly successful season 1 will now commence in October 2020, against the previous July rerun date. The delay was communicated via the official Twitter account.

The Promised Neverland manga by Shirai and Demizu was launched in August 2016 in Shueisha’s weekly shounen jump manga, while the first season of the anime premiered in January 2019.

The weekly manga has now gotten to its final arc and fans now look forward to a live action film adaptation of the manga, which is expected to grace screens in Japan in 2020. We hope this doesn’t get delayed too.

The plot of the first season of the anime focused on the lives of three orphans – Emma, Ray and Norman who got acquainted in the orphanage.

With the end of The Promised Neverland coming soon, how do you think this series will end? pic.twitter.com/yzActLjLfj

The kids try to learn the dark secrets of the orphanage, and after making some progress they devise an escape plan to run away from the orphanage and save themselves.

In the coming season we expect more twist and dark plot as the kids go into the real world, the director of the anime has already promised a lot of twist, commenting on how challenging the scripting was.

We also expect to know more about the secrets of the demon forest and how the reveal will affect the storyline, one major question that the 2nd season has to answer will be – Does Emma go back to save the other kids?

The Promised Neverland manga was nominated in 2017 and 2018 for the manga Taisho awards, winning the Shogakukan manga awards in 2018. It has over 16 million copies in print.

The anime’s first season thrived, winning the Crunchyroll anime awards for Best Fantasy. It has also been listed among the best anime of the 2010s on several platforms.

Advertise with us
1305
likes / shares
FacebookTwitter