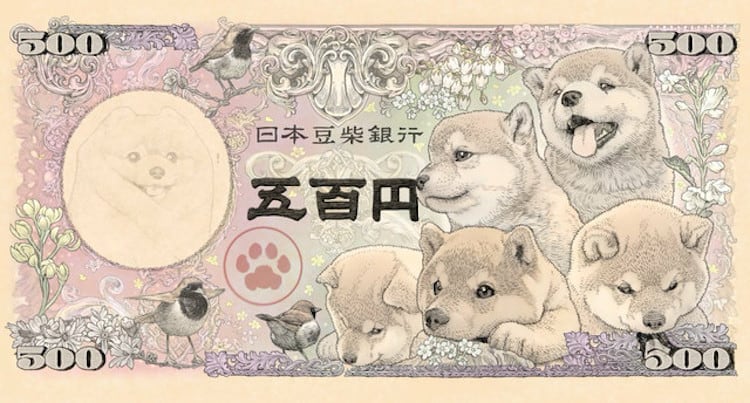 Konosuba Will Be The Next Crunchyroll Movie Night

The ministry of finance revealed upcoming designs for the Japanese banknotes. These new design notes are ready to hit your wallet in the year 2024. The new design on the banknotes varies from Japan’s iconic Mount Fuji to Hokusai’s The Great Wave.

Japanese manga artist and illustrator Ponkichi has decided to make his own set of banknotes with his design illustrated on the notes. The design on his banknotes will feature the most beloved dog breed in Japan, the Shiba Inu. The first note to release from the artist was a 1000 yen ($9.31) banknote, and it featured a pup proudly looking above surrounded by decorative swirls.

If you thought having one dog on the banknote was cute, wait till you see the 500 yen note as shown below.

After seeing the 1000 yen note, people on the internet said what the guy in the matrix movie in another movie should have said, ‘I need dogs, a lot of dogs’. The 500 yen note features the smaller Shiba Inu breeds. Packed with not one, or two, but five different puppies showing five different ranges of emotion. This can make any cat person go ‘Awwww’ and give any dog person the “Worth it” heart attack.

Japan doesn’t have a 500 yen note. If they pick this illustration as the cover for 500 yen note, then they would be the coolest country in the world. It would help the country’s tourism industry. I mean just look at the pups. If that doesn’t make your heart melt then you have no heart.

The cuteness overload doesn’t have to stop at banknote. Here are the merchandise following this trend.

The Shiba inu banknotes and other merchandise can be purchased by clicking the link here. You can also get it from Amazon Japan. Hurry! It’s puppies on banknotes, it’s not gonna last very long.

Advertise with us
229169
likes / shares
FacebookTwitter