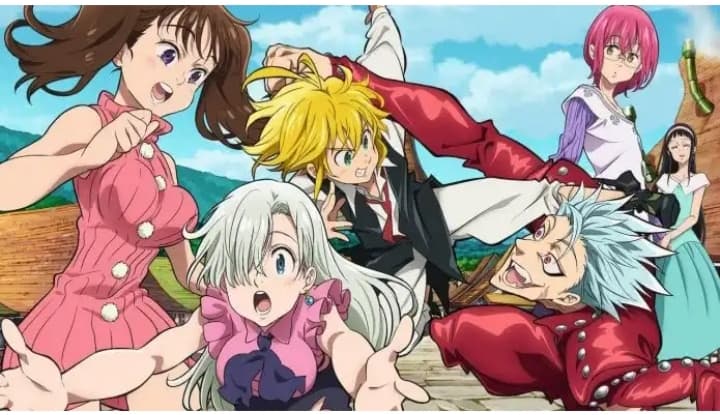 Popular Anime, Seven Deadly Sins adapted from Nakaba Suzuki’s manga known in Japan as Nanatsu no Taizai will be having a season 4. Good news, it is returning to Netflix.

Seven Deadly Sins is an anime about a popular  group of knights (The Seven Deadly Sins) who protect the kingdom of Liones from demons and otherworldly threats. Meliodas is the leader and the strongest of this group.

The previous seasons aired on Netflix and season 4 is also expected to be on Netflix. The 3rd season of the Seven Deadly Sins ended on a high note as Meliodas killed Fraudrin in an action packed scene, making anticipation for the season 4 all the more higher.

Season 1 to season 3 of the Seven Deadly Sins have been both critically and commercially successful, as it has grown beautifully, staking a place among fan favorites.

There is still a lot of stories to be told about the group and their battles in Brittania. The previous seasons have covered 197 chapters from the manga,  which now has over 280 chapters.

Reports from some platforms says that the season 4 will be the final season. This now leads to the question, will the season 4 follow the manga? There are over 110 chapters left and it would be difficult to finish all that in just 24 episodes.

Seven Deadly Sins season 4 will have 24 episodes and it will be known as Seven Deadly Sins : Wrath of the Gods. We expect the anime to address a lot of things and provide revelations on Camelot as well as the dynamics of the relationship between Elizabeth and Meliodas.

We hope we get to see more of Merlin, Escanor, Ban and even Zeldris, Estarossa, Monspeet and the other 10 commandments. Expect the revival of the four archangels and bloody battle between the Angel’s and the demons. A revival will be made about Meliodas personal life too.

The anime is currently airing in Japan and it is expected to air on Netflix between April and June 2020.

Let us know what you think down in the comments below! Do you think the anime can accomplish it and show us a great ending?

Advertise with us
804
likes / shares
FacebookTwitter