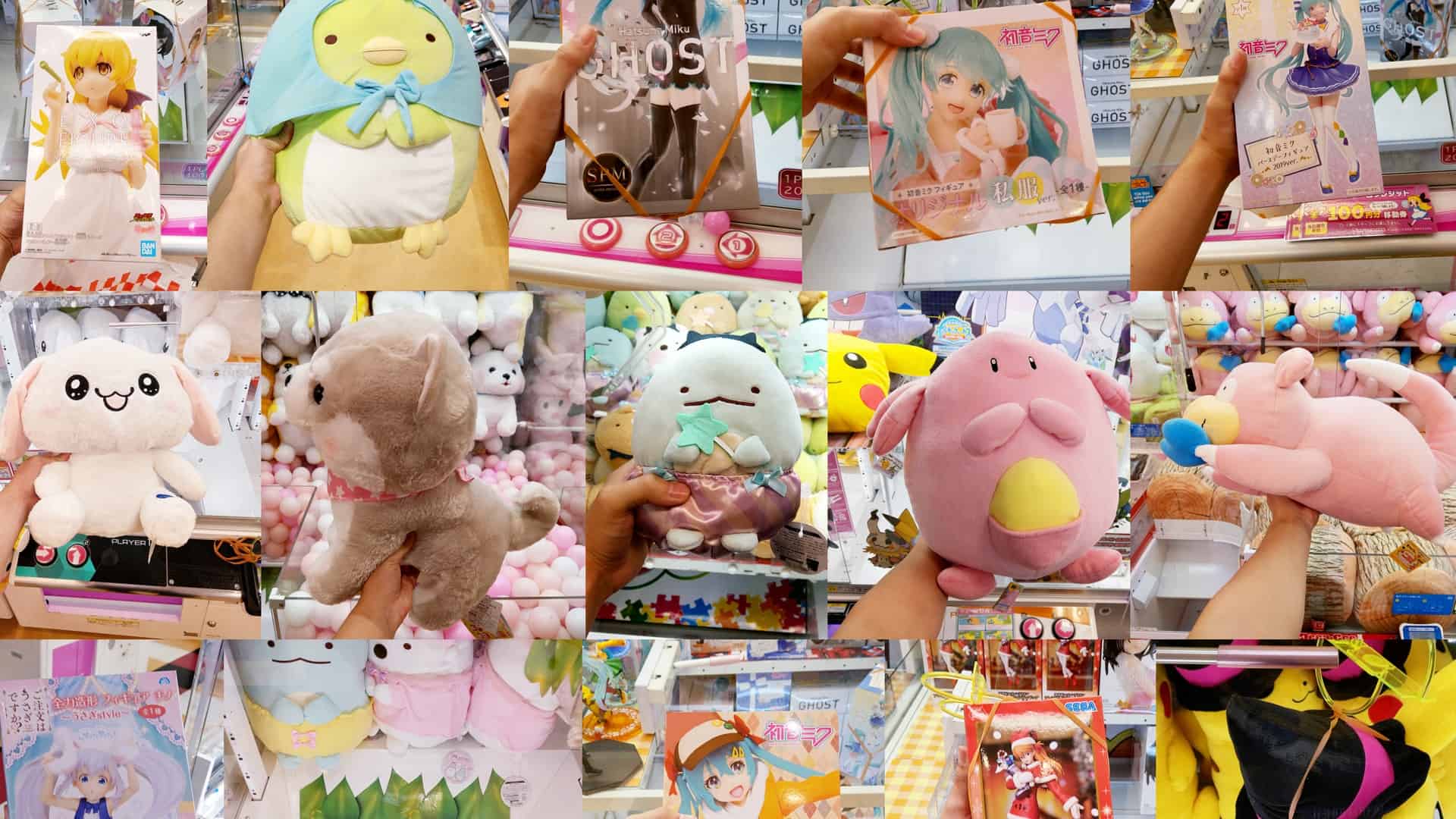 All around Japan you will find many arcades filled with crane games and big prizes. Sometimes these prices are worth a lot of money such as anime figures, exclusive limited edition plush toys, etc. Of course, it’s quite addictive to get that sense of satisfaction from winning a prize in one of these games vs. paying full price for them at the store.

Even if you end up spending the same amount as you would have by simply buying, the experience and the feeling of accomplishment you get from winning your loot is worth it in my opinion (also the more you play, the better you will get).

I have witnessed many tourists in Japan try their luck or to impress their friends, only to blow $5 – $20 and give up empty handed.

Most of these games are, in fact, winnable. Some games I feel are “scammy” or feel rigged, but for the most part, each game has varying degrees of difficulty and winnability.

The first secret to winning is being able to identify the machines / games that you feel are most winnable.

In my case, I have always felt that the Gravity Games are the best!

The second objective is to locate machines that have been already played by others before you.

In this case, someone else may have nudged the prize closer to the edge. They made progress on the prize, so in theory, your win should be easier than if you start with a freshly reset game. (Depends on the game type.)

The more progress that has already been made, the less you should have to pay to win. Locating machines in this state should be your first priority.

If you can’t find any machines in a “used” state, you can lurk around and watch others play. If you see someone spend a lot of money and give up, it might be a window of opportunity for you to swoop in for the final blow before an attendant comes in and resets the prize. 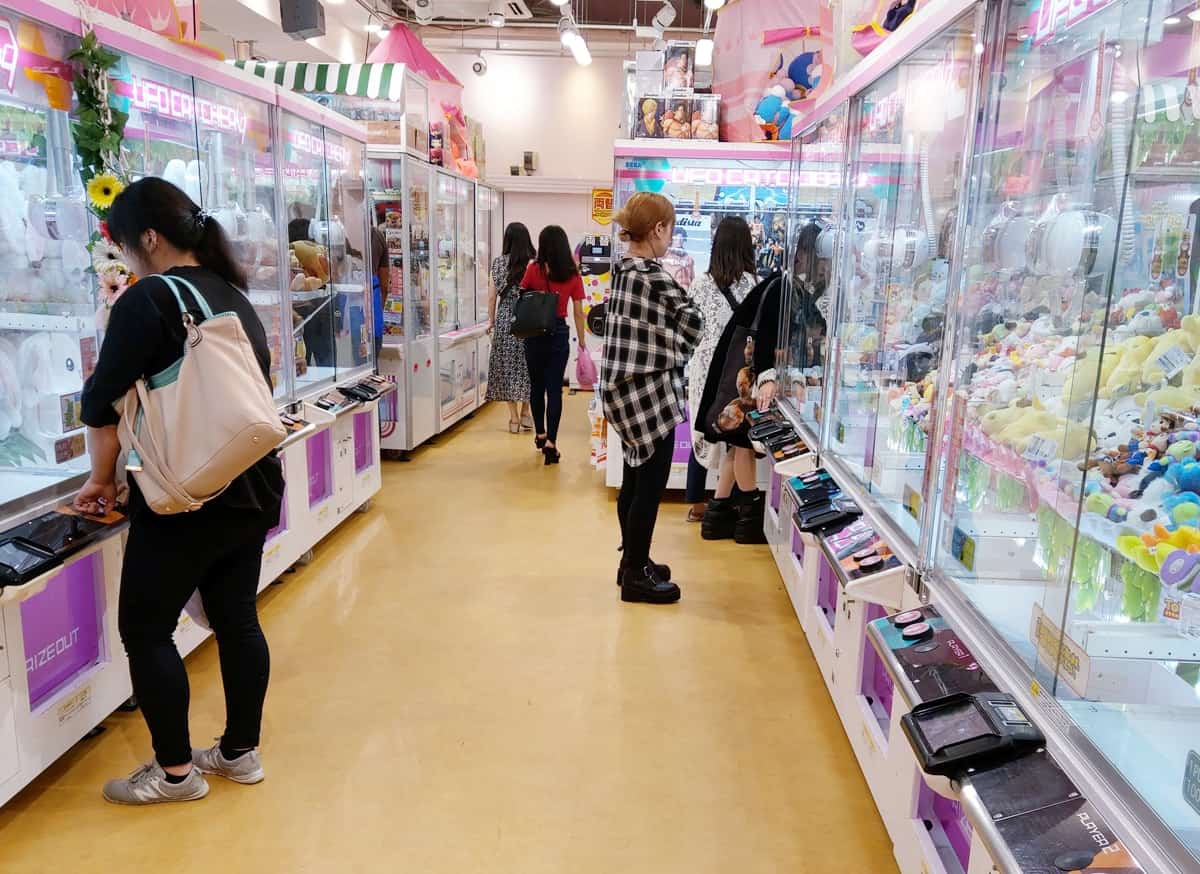 Of course, you should consider proper Japanese arcade etiquette. If someone leaves their stuff at the machine, it probably means that they just need to get more change to continue playing. Some machines have specific signs or items that people can place into the coin slot to hold their place while they step away.

Don’t be rude, learn when you have your opportunity and capitalize on it.

On my very first trip to Japan, I won a prize that I didn’t want. I left it on the floor in the arcade and came back 20 minutes later to find it STILL there where I left it. Of course, I ended up taking it home with me after that.

2. Don’t be Afraid to Spend

Why do people lose? Because they give up early. Sometimes they give up when they are only $1 – $5 away from winning.

Don’t expect that you can get a $1 win every time. In fact, a lot of the game types are impossible to get a First Try win. Only noobs go in with the mindset that they can win on the first try, and then get frustrated when they don’t win.

You will never develop the skill or learn the mechanics of the machine if you only go around sampling $1 – $5 worth of games on different machines hoping for a quick win. Pick a machine, dedicate yourself to winning the prize, and allocate $5 – $25 per prize.

In most cases, the value of the prize is probably much greater than $25 (unless its a SEGA prize).

The more times you play the same machine, the more you will get the hang of the timing, the calibration and the strength of the machine. Usually every machine is calibrated differently according to the prize that’s inside.

Precisely what the arcade owners want is for people to just go around “testing their luck” on as many different machines as possible, since they will not be used to each calibration and most likely lose every time.

If a game costs $2 or more per play, sometimes that means it has a high winnability vs. a game with low cost per play which are designed to lure in cheap, unskilled players. 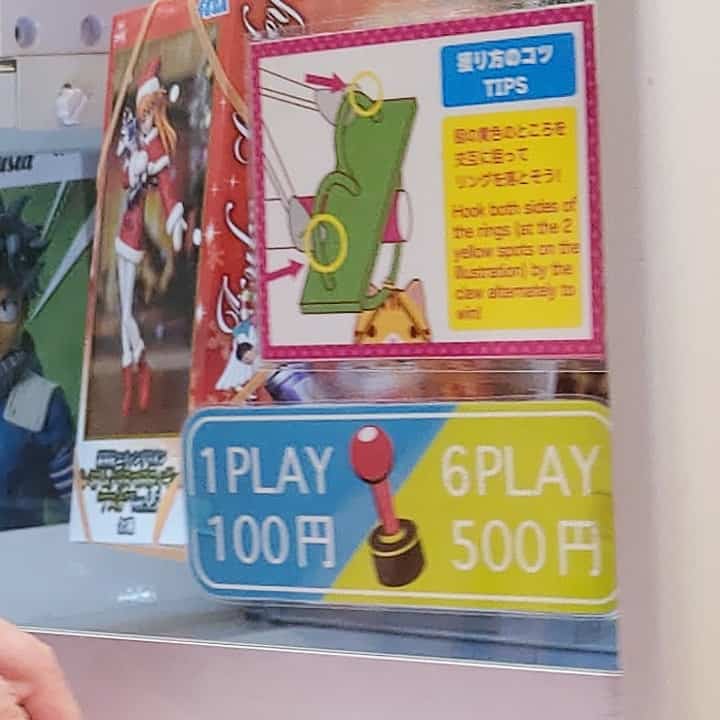 Sometimes the games offer bonus plays for spending $5 or more, in my experience, you should always take advantage of this. Even if you happen to win on the first try, usually the arcade will reimburse you with credits to use on any other machine in the store.

1. Smaller Prize does NOT mean Easier

The small keychain plushies or little prizes look like they should be easier to win. They are certainly worth less than some of the bigger prizes right?

The problem is that most of these small prizes are actually more difficult to get a good grip on with the claw. Smaller prize means a smaller target. 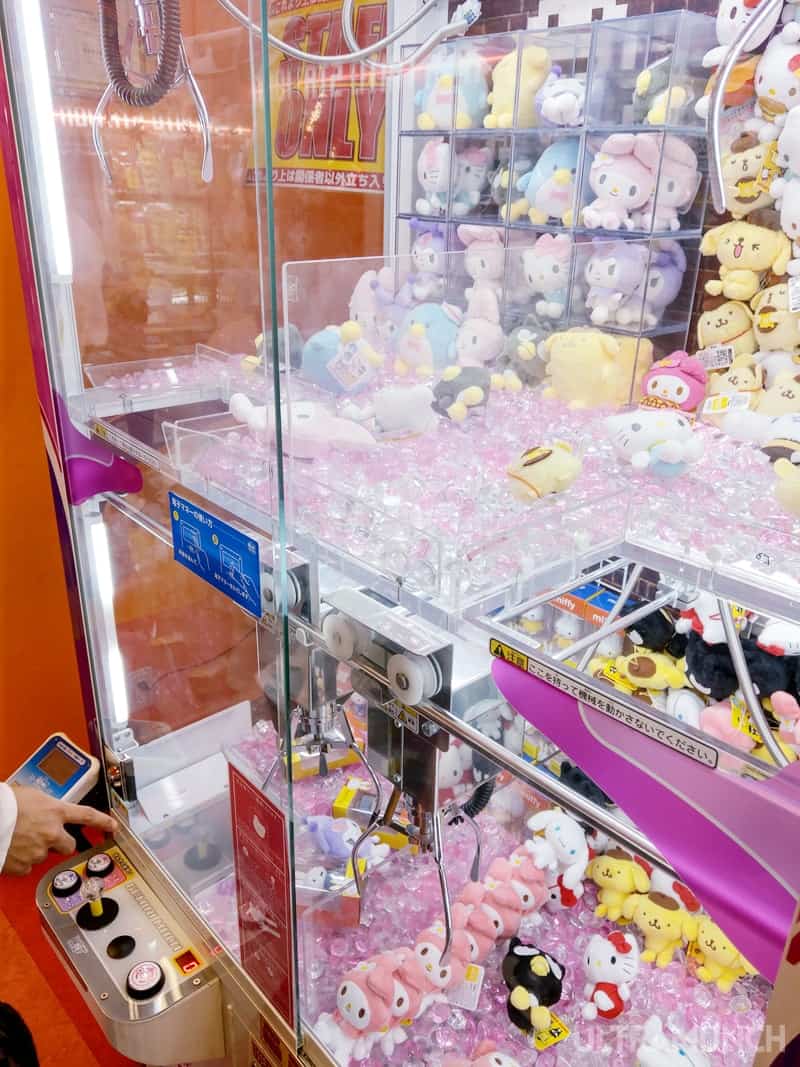 On top of that, many small prizes are similarly weighted and balanced, meaning that the arcades have a lot of experience to know how to calibrate the machine’s “break even” point so they will get their money’s worth for the prizes.

In this case, I usually never go for machines with small prizes, even if it looks like an easy win.

In my personal opinion, SEGA arcades are complete scams! They tend to have the largest and brightest buildings right on the main streets which means they are mostly targeting tourists or low skilled players.

Usually the cost per play is low at $1 per play. They also usually do not offer any bonus for putting in $5 or more. 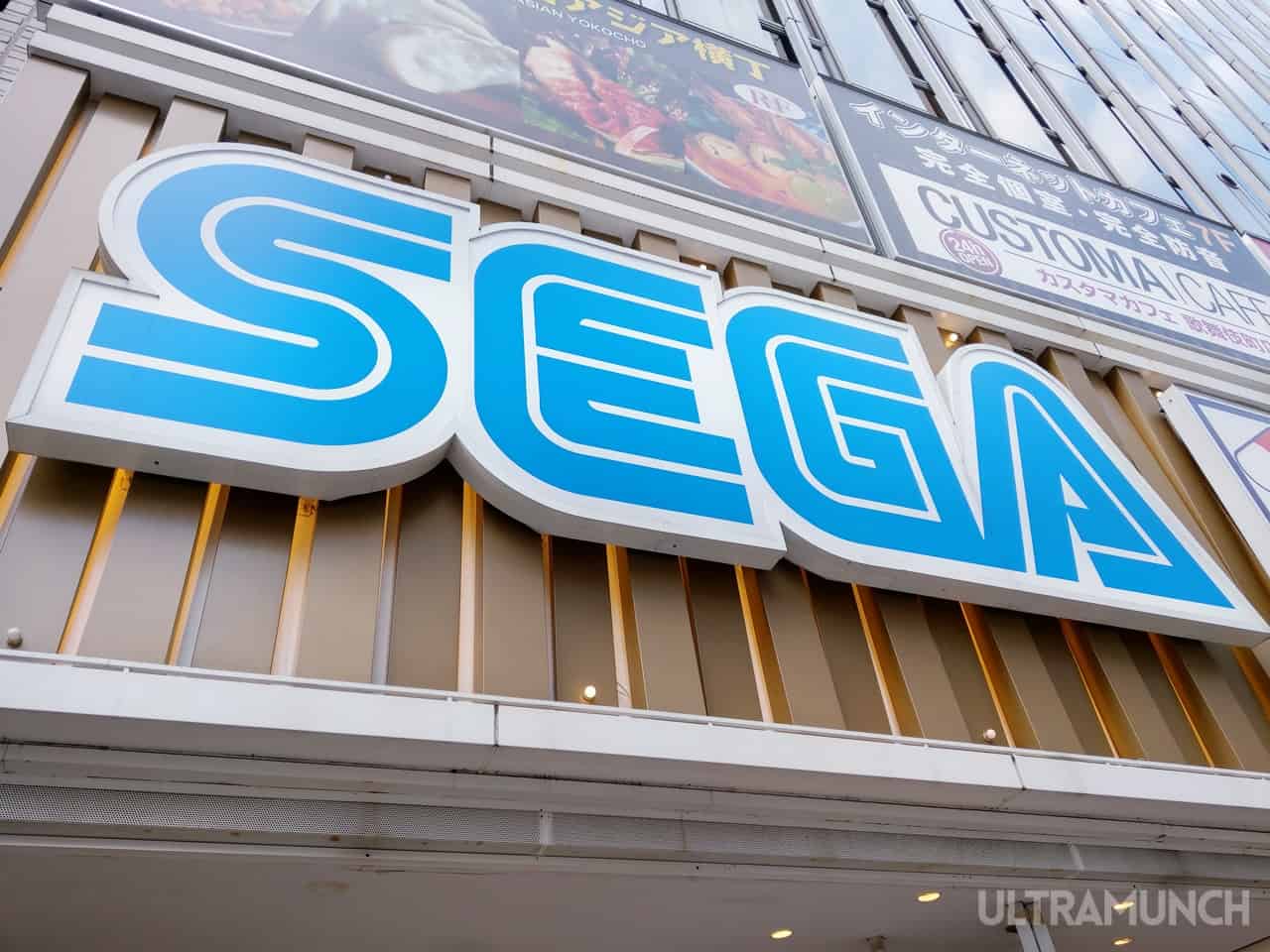 Almost all the games here feel like they are “rigged” or designed to lure unsuspecting customers. If you want the best tip of all, I would suggest not giving any money to these people!

It also feels like the workers purposely avoid you in fear that you request too many machine “resets” as many of their games are proprietary and not common in most regular (non-SEGA branded) arcades.

The Best and Worst Game Types

Now that you know some general tips on how to win, I have compiled a list of games that I have ranked from worst to most winnable based on my experience.

When I define a game as “fair” or “unfair”, I am talking about how much of the game depends on the player’s input vs. how much of it is dependent on the machine calibration or chance. A “fair” game is one where player impute is the primary factor. 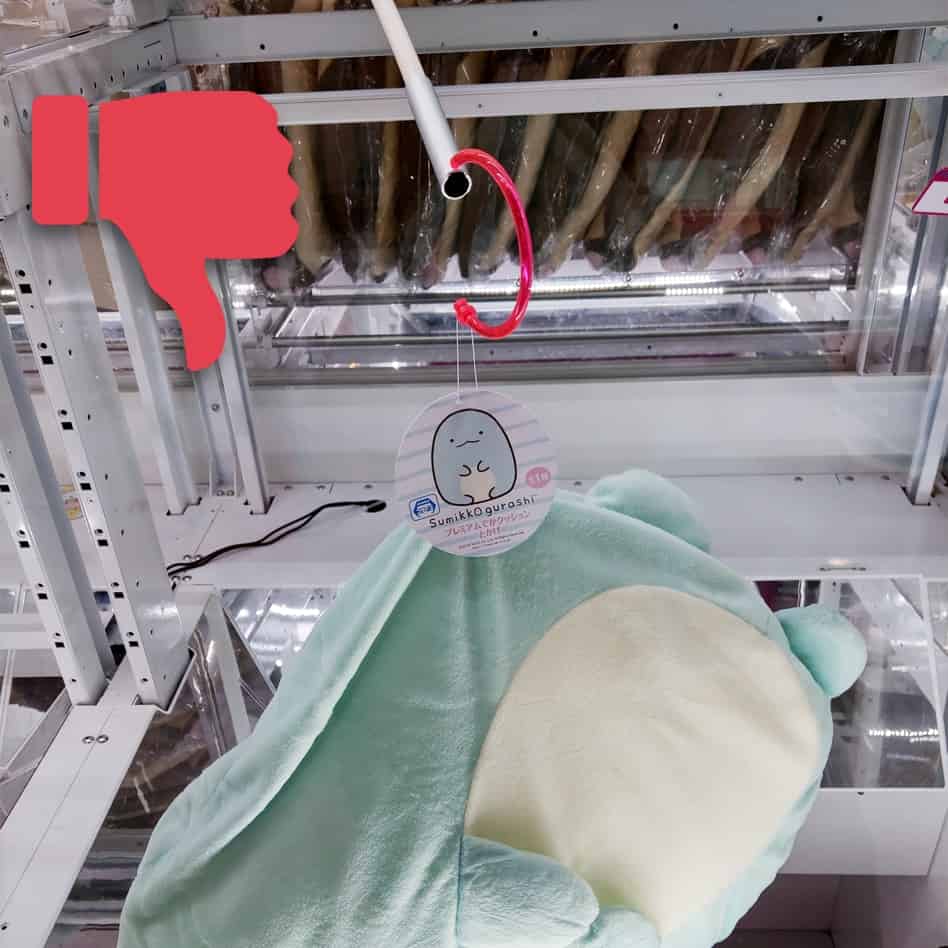 SEGA games are one of my least favorite because they always seem to follow this trend: looks easy, attractive prize, low cost per play, but very difficult to actually win.

The worst thing about these SEGA three claw cranes is that (in my opinion) they are actually designed to troll you. The claws appear to have super strength on initial contact with the prize, and once it lifts the prize in the air, it “fails” and drops the prize.

This creates an adrenaline rush in the player who thought that they were “so close” to winning it, and thus they keep feeding money into the machine. I feel that these games are terrible and predatory, 90% of your victory feels like its up to the lottery of the machine. 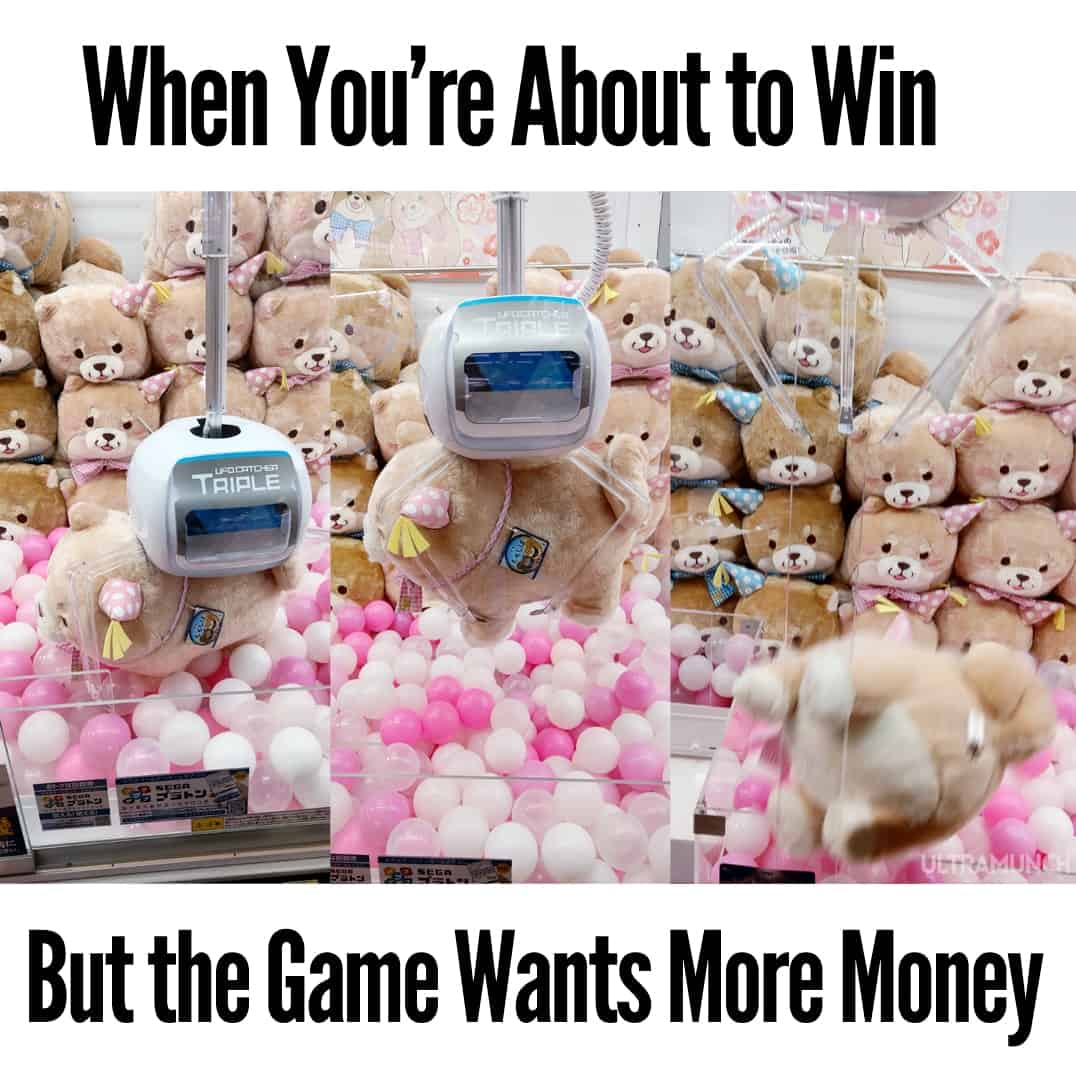 Even if you get the prize closer to the hole, I have witnessed countless times where it bounces right back where it started or even further. Most “large” prize games would charge $2 per play. SEGA, most likely rigging the machine to lose, attempts to reel in unsuspecting players with $1 plays for large prizes. 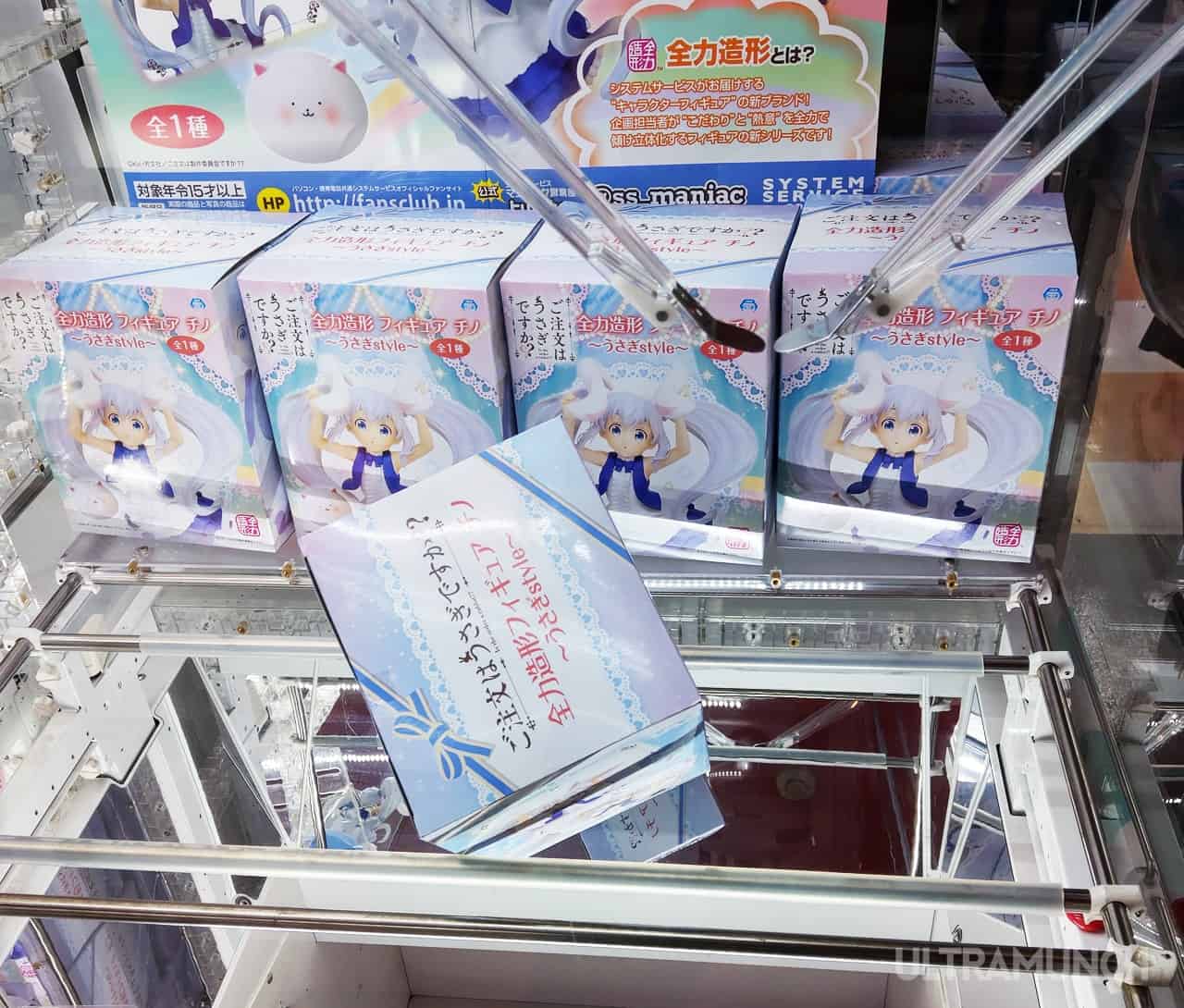 I have witnessed a few very skilled Japanese payers being able to clean out these machines, but I feel that this requires significant investment into the physics and inner working of the specific prize / box weight and size + claw calibration.

On top of this, it is possible for the box to fall into an impossible position where playing the game more does not guarantee you will make any progress or that it is even POSSIBLE to win. It feels like there’s no consistency in the gameplay (at least for me).

What I have witnessed is that the “pro” players of these games constantly call the staff to come over and “reset” the machine or sometimes persuade the staff to put the box in a favorable position for them. This is not a favorable condition if you are a tourist who doesn’t speak fluent Japanese. 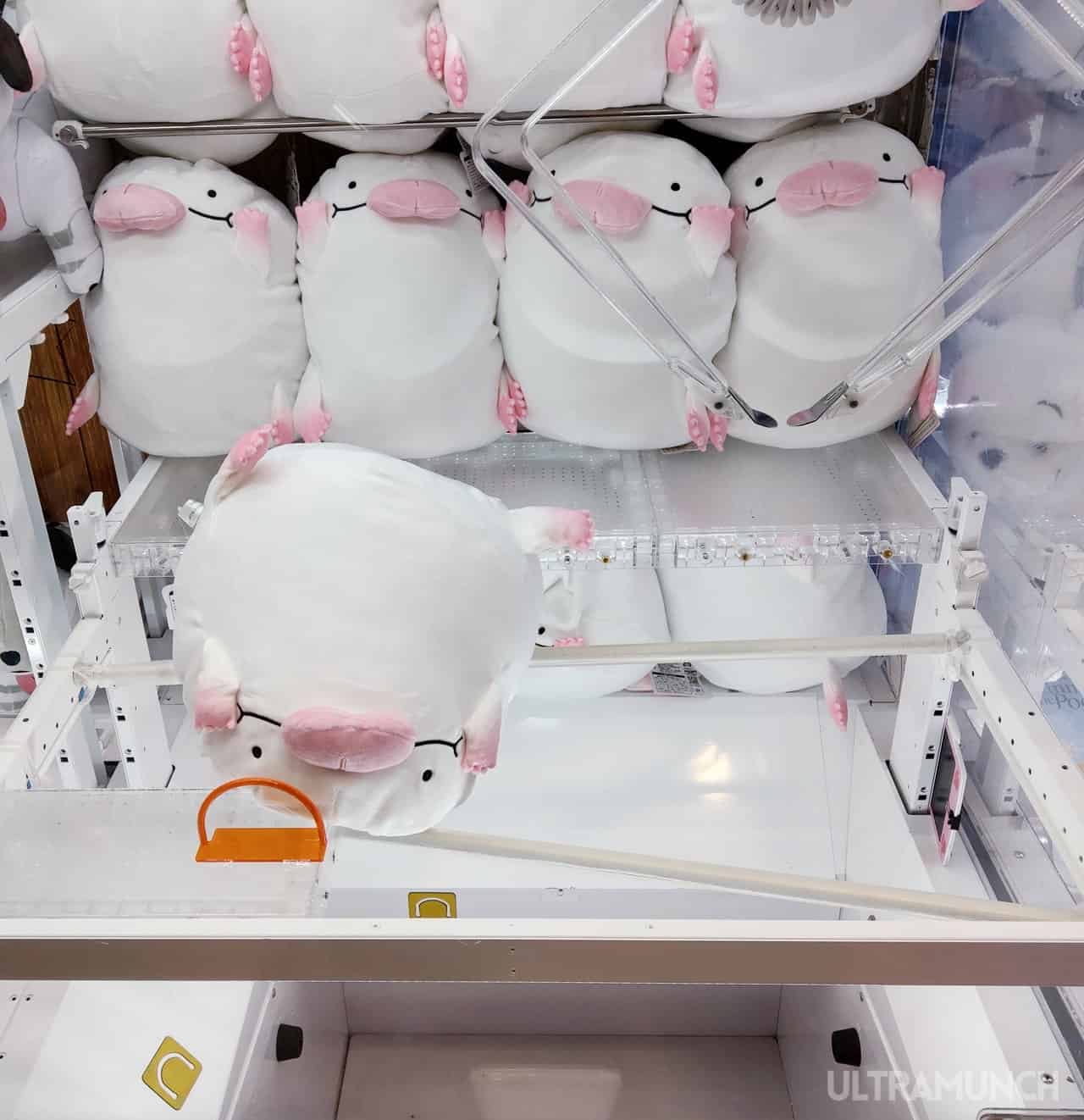 Unlike the games where a box needs to fit perfectly through the bars, some plush dolls are irregular, soft, and can be pushed through the bars in more than one way. Because of this, the chances of winning this game are much higher than the same exact game using boxes.

Surprisingly, the large claws are sometimes really east to win.

These machines are interesting because it feels like the arcade owners do not know how to properly calibrate these machines for the prizes. Sometimes you can get lucky and find one that has high claw strength. Usually they need to turn up the claw strength to grip jumbo prizes, and that “sweet spot” is usually not fine tuned.

We won so many times in a row from this machine that the worker had to stop us to “re-calibrate” the machine before we completely drained it.

I have won many prizes that I thought I would never win from these games simply because the claw was too strong.

Pro tip: Off centering the claw on the prize can sometimes give you a better grip. Everyone thinks they have to perfectly center the claw to win, not always the case. 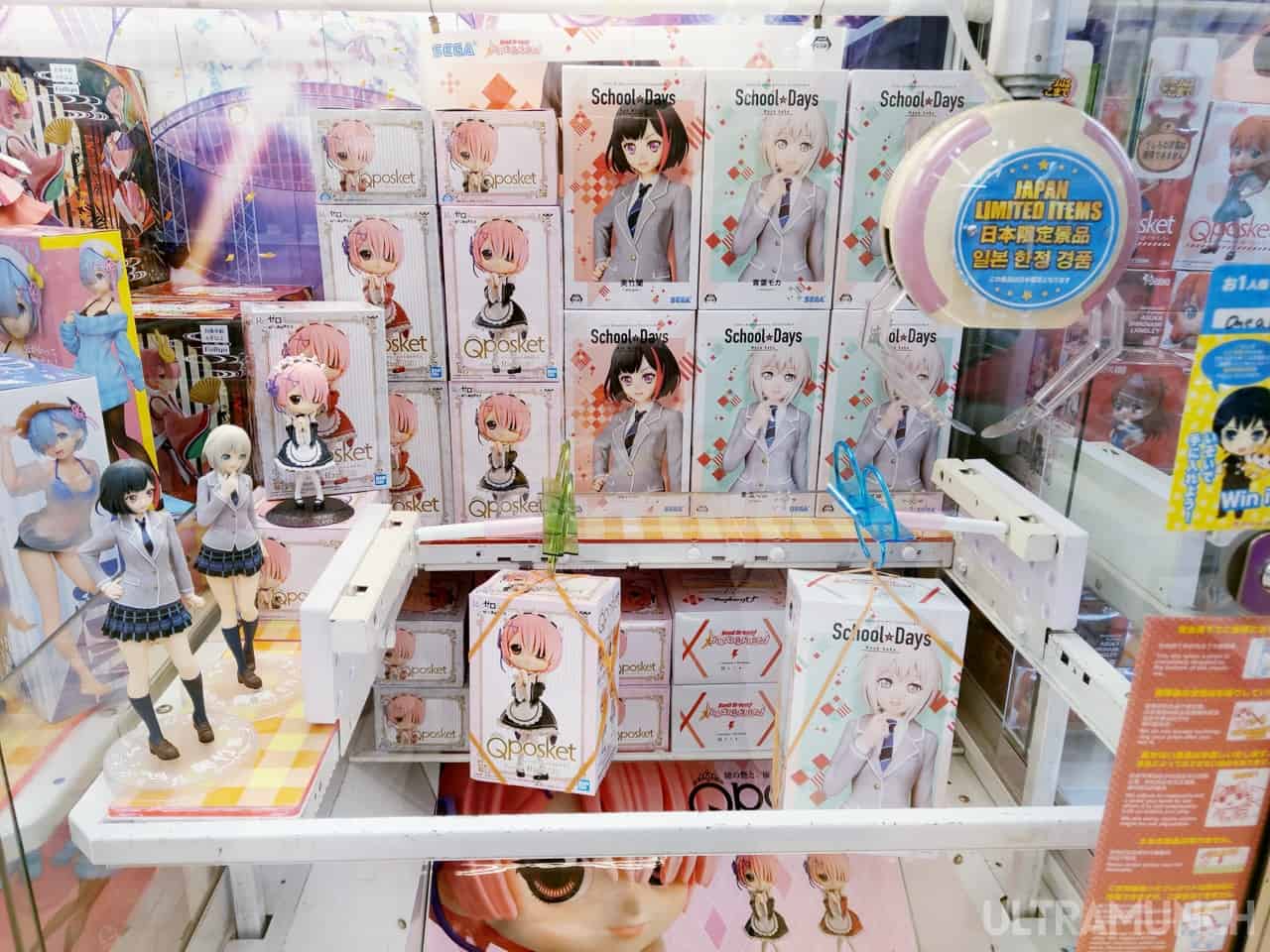 Of course, my all time favorite game is this balance game. I feel that it is the most “fair” game you can play as far as player input ratio to win rate is concerned.

Not surprisingly, this type of game is not as common as the other types. This game also appears to be very difficult, and if I am being honest, it does require a fair amount of skill to get the claw in the perfect position.

With this game, the difference of a millimeter could be the difference between making massive progress or just barley nudging the prize along. I like to mentally measure the “progress” of the prize based on how many plays I feel it is away from falling.

For example, if it is far from winning, I might measure it as $25 away from winning. If I think it’s worth $25 I will play it. If not, I will usually wait to other people attempt to win it, and if they give up, I can usually swoop in for a $5 win. It is an effective strategy that requires lots of patience.

One reason I bring this up is because accurate hits could be worth $10 worth of progress vs. a bad hit that gives $1 worth of progress. In the GIF above, my claw made direct contact with the thin plastic holder. These direct hits easily provide massive progress (maybe $10 – $25 worth of progress) and can even be one hit wins!

Most people view winning these crane games as simply getting “lucky,” of course, if you only pick the gimmicky and scammy games, then perhaps it really is all up to luck. But if you know what you are doing, your skills and strategy can directly correlate with you winning more prizes.

Disclaimer: This article and any content relating to specific people, products, companies, or brands, etc, is 100% our personal opinion and not presented as fact or claims!

Top Nine Destinations for Otakus to Experience in Japan

An Insider’s Guide to “Kaitori” of Anime Collectibles in Japan