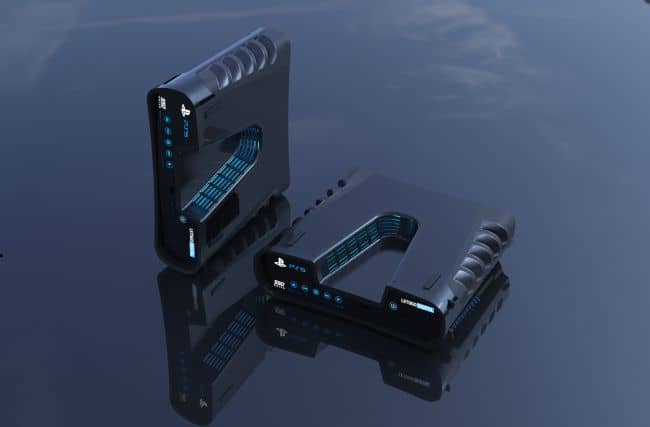 When the news broke out the Dutch Publication made their own 3D rendering of the upcoming Playstation, apparently the design was based on the illustrations they had obtained.

At first, it seemed like one of those stories from the internet But soon we learned  Yasuhiro Ootori (Technical Director) for Sony filed a patent under the name “Electronic Device”, the story slowly starting to gaining weight around it. Because Yasuhiro Ootori was also behind the patent for the Playstation 4.

The reason people on the internet seem to think that this is “credible” is because the “Electronic Device” is classified as Class 14.02, which is apparently the same section the PlayStation 4 shared. The patent was allegedly filed with the Brazilian National Institute of Industrial Property (INPI) and, afterward, with the World Intellectual Property Office (WIPO).

Voila, the rendering of PlayStation is nowhere at our doorstep. On first sight, The rendering looks not as elegant as fans have hoped it to be. It is finally living up to what adults have said about gaming consoles from the beginning of the time. It looks like a children Toy. And this just proves them right.

The first thing the console exposes is the V shape space in the middle. Which could be for the New Kinect or it is a marketing technique to sell the rest of PlayStation as a premium DLC. By the time, they announce the Pro version, they’ll add a hole in the middle of the V shape, so the people can take a dump in it.

The rendering does manage to look something like a weight machine, you’ll get to see in a shopping channel at 3:00 clock in the morning. Not much has been known about the performance of the system on especially spawning 60 frames per sec on 4k display. To deliver that exact number on a computer, you better have a life, where you count money on by its weight.

What’s your thought on this machine?

Personally, I think this is a bunch of hot air. A buzz story to get some attention. Sony is known for having a sleek sense of fashion from their compact digital cameras, to the sleek PS4 design.

Although Sony has had pre-release design blunders in the past.

Anyone remember the boomerang banana PS3 controller prototype? So it is entirely possible that this is a real blunder that will be later corrected. I personally believe the final PS5 will not look anything close to this!

That being said, you can probably bet that Sony will wait a year to release the “slim” version of the PS5! 😉

Disclaimer: This is my opinion solely based on the pictures and stories I have heard, nothing here is claimed as fact.

Advertise with us
42
likes / shares
FacebookTwitter