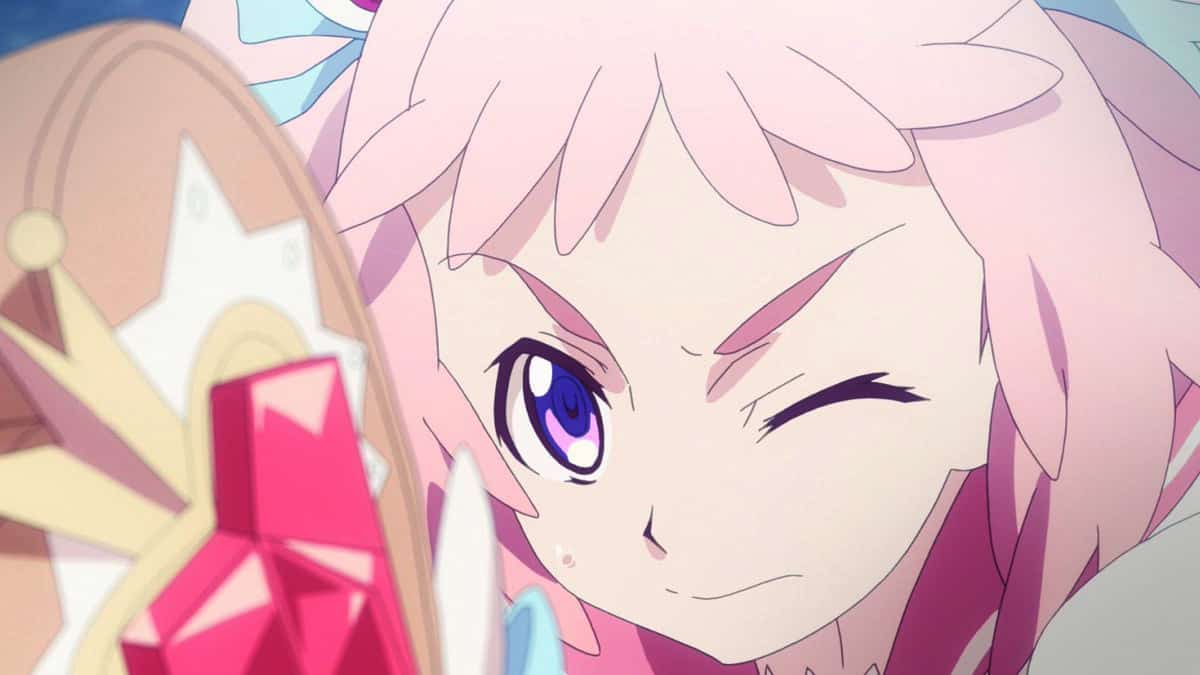 Good day, my fellow otaku and weab fans. I am Marco Teito-kun at your service. Starting today, we are going feature daily anime and manga reviews that are either worth wasting your time or burning straight to the incinerator. So I hope you guys out there to join us and share your opinions with our fellow comrades-in-fandom to explore and discover these gems and trash from the heart of Sushiland. And for our first anime review, we would like to present to you the latest anime original that fairly divided the otaku community. Whether it is a masterpiece or a trash is up to you. With no further ado, we proudly present to you the first anime in our roster, Re:CREATORS. 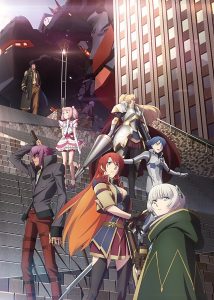 From the great masterpieces like Re:Zero kara Hajimeru Isekai Seikatsu to the abominations like Isekai no Smartphone to Tomoni, today’s anime, manga, and even light novel trends somehow lean to the isekai genre. So, it is indeed really good to have a fresh air to breathe once in a while thanks to Re:CREATORS having its debut last Spring 2017. Though, it has a “quite” unique anime concept, we won’t deny that it was already “pioneered” by the groundbreaking franchise of Fate Series. But instead of Legendary Heroic Spirits from both epic legends and histories, Re:CREATORS brought some of the popular characters from “otaku culture” straight to “our world”.

Souta Mizushino, a plain otaku teenager found himself enjoying the comforts of his own room. Abruptly, he was teleported to the anime he is then watching and returned back to his own world. To his surprise, he later discovered that the mecha knight heroine on the same anime he was sent to a few moments ago is now with him on his own room. And it seems that she is not the only one who appeared amidst the streets of Tokyo as other fictional characters came wandering carrying their hopes and miseries from the own stories. And one of them is the Military Uniform Princess who bears an extreme grudge against “our world”.

This series is not something you can see every season of anime, as of now. So there is no wonder that this series is either a hit or a miss for most viewers. And hopefully this may trigger a series of works centered on this very concept. And no doubt, this is the beginning of the age of Reverse Isekai.

Must Watch Rating 7.5 out of 10: Not Everyone’s Cup of Tea though

If you don’t enjoy series which has lots of narratives, like Kaiji and Boku Dake ga Inai Machi, I will not recommend this anime to you. Another reason is despite of having flashy other-worldly characters, the time consumed on these series of conversations are two to three-fold greater than the action scenes itself. So for people out there who love to see more action and do really have high expectations after watching the first episodes, you better drop this series.

But personally, I highly recommend watching this series, especially to writer-wannabes. This is because it is one of the few works out there “inclined” to writing and making stories, like Bakuman. As far as my anime watching experience is concerned, there is no other anime for me that have merged several genres of anime, manga, gaming, and light novels into one as brilliant as this.

Just like what I mentioned earlier, though it can easily have been an action-inclined story a la Battle Royale and Fate Series, the writers of Re:CREATORS turned most part of the series driven by conversations. This is what makes a great deal of viewers drop the series. But for viewers who love a narrative prose, majority of them really likes this series. Why? Every time they engage, the plot deepens and tackles almost every character’s issues, both of the “Creators” and the “Creations”.

Hence the progression of both the story and the characters is slow but steady ultimately leading to an acceptable conclusion. And don’t forget the number of times they break the fourth wall and the fourth wall of that same fourth wall, the countless “burning” of characters, and even the absence of plot armors make this series a unique and a fun watch.

My only problem with Re:CREATORS is a few plot holes left hanging and unanswered despite the time dedicated to conversations.These became evident towards the end of the series.

Character Development 8 out of 10: We Hate Reality

Why we watch anime again? For most of us, this is because we want to relieve our stress and as a form of escapism. That is why we root for active, daring, and brave protagonists most of the time. And this either makes or breaks a good series, the way the main protagonists play its role on the series. Pretty much like how Makoto became a jerk on School Days, depending on your perspective, Souta drags Re:CREATORS down.

With his cowardice, passiveness, and seemingly uncaring attitude on the first episodes, and to some extent, even to the last episodes, he is an example of a bad protagonist. But don’t get me wrong, I am not putting Souta down, though he is less dynamic than a sitting-and-doing-nothing-Deku (both characters have Daiki Yamashita as seiyuu), he is by far the most realistic character of Re:CREATORS. And that’s when our anime preference enters, the more realistic the character is, the more most of us hate it. 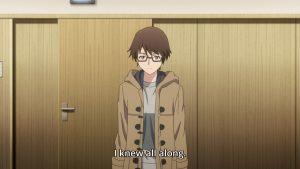 Quite surprised? Remember how most people bashed Subaru for being pathetic and a whiner on the first part of the second half of Re:Zero? So does Souta. He is another victim of our expectations what a protagonist should be. Even though it is given that it is indeed more than rational that they would act like that given the situation they were.

Honestly, after knowing the experiences of these characters, after doing something they will regret later and you are on their shoes, will you do even better? I repeat, after doing something they will regret later. I doubt you will. And as their stories progress, both of these protagonists tried to moved forward and somehow succeed. That’s where Souta somehow redeemed himself. On the side note, we all know why most of us still dislike Subaru.

Meanwhile, the “Creations”, the fictional characters who found themselves on our world, really made notable character developments. The fact that they themselves are aware of being fruits of creative minds and their world are nothing but pieces of fiction weaved together kickstarts their growth. And they further grow as they push their own stereotypes away from themselves.

With no added spoilers, two “Creations” who manifested this notably are Mamika, the magical girl, and Aliceteria, the knight lady. Because of the way how they were written as a character, both of them displayed what a generic magical girl and a knight are. It is not their own fault why they are seen as both dumb and naïve at first. But thanks to how the story handled their characters, they both grew and acted based on their own volition.

Character Design and Animation: 8.5 out of 10

Given how studio TROYCA handles Aldnoah Zero, it is no surprise for me that they really did a good job most notably on the scenes where mechas are involved. And that’s not all, even the character designs of the other “Creations” screams the genre where they belong. Hence, the way each one of carry themselves are really suitable. And even though the action scenes are really not that outstanding and ground breaking, the fluidity and the intensity of it are remarkably solid.

Another one that caught my attention is how they handled the recap episode on the middle of the series. It is really good that I am confident enough to tell you that it is unlike the recap episodes of any other animes. Thumbs up for studio TROYCA for pulling up good punches on spots where it is needed. 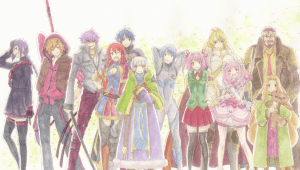 For me, the journey from start to finish is a fun ride for me. I have nothing to say more that I feel near satisfied with how the story wrapped itself. Given that, I have no further desire to wish for a season two for this anime. Though, a second season might explain some plot holes that has been missed, I just feel that may spoil a good series if done. For me, OVAs and spin-offs (currently, a manga spin-off is published in Japan) are viable options if ever the bigwigs want an extension of this anime original. Aside from those, it is pretty cool if they made more anime originals based on the “stories” where these characters originated.

That’s all folks! I hope we’ll see each other tomorrow for another anime and manga review. I am looking forward to your reactions about this series and never forget to stay chill. If you have any anime and manga suggestions you want us to review, have it included on our comments and we will do our best to make one as fast as possible. Farewell, my fellow otaku and weab fans out there. I am Marco Teito-kun, signing off.

Watch it on Amazon Strike!

Advertise with us
993
likes / shares
FacebookTwitter