Over four years have elapsed since “Season 2” ended, but fans can rejoice as a new Konosuba animation project was recently announced!

The anime is based on the popular Japanese light novel series, Konosuba: God’s Blessing on This Wonderful World, and its first season debuted in 2016 with a second season a year after. Following the success of the two seasons, a film adaptation called Konosuba: Legend of Crimson was released on August 30, 2019.

Fans of Konosuba have been eagerly awaiting news of a third season, but even with this new announcement, the question remains whether or not there will be a third season.

The announcement was made on July 18 on the official Twitter account for the anime series and, translated into English, the tweet states that production is newly underway and to look for a follow-up post. Nothing specifies whether the new project will be a third season, another movie, or even a spin-off. But fans can still remain happy knowing that something new is coming down the pipeline.

The story of Konosuba follows Kazuma Sato, a teenager who dies from a heart attack after saving a girl’s life from an oncoming truck. Once he dies, Kazuma is transported to a fantasy world and quickly forms a goofy and dysfunctional adventuring party with the goddess Aqua, arch wizard Megumin, and the crusader known as Darkness. Counting the movie, the series has adapted the first five volumes of the light novels. 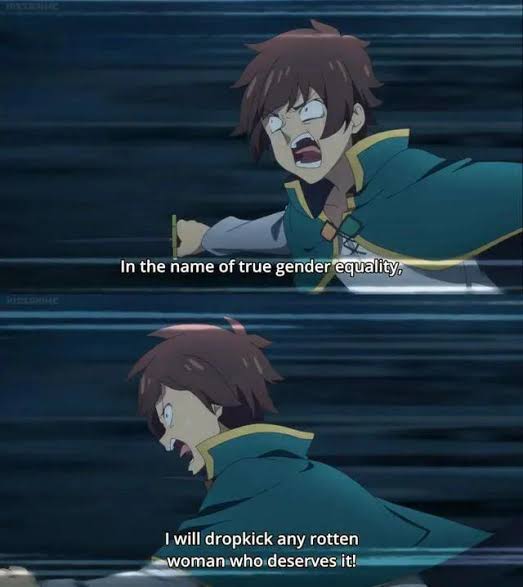 Each season has adapted two volumes each, so “Season 3” could potentially adapt volumes 6 and 7 which are titled The Princess of the Six Flowers and 110 Million Bride respectively.

Volume 6 is about our heroes enjoying their victory against the Devil King and are then hired by Princess Iris to capture “The Chivalrous Thief”. But after a fight with the Devil King’s remnant army ends badly, Kazume is exiled and separated from his party and must embark on a quest to clear his name. Volume 7 centers on the party potentially disbanding after Darkness leaves to marry a local lord. “Season 3” could also see further development of Kazuma’s and Megumin’s relationship which started during the event of the movie.

The Future of Konosuba

The Konosuba light novels reached their conclusion on May 1, 2020, with volume 17 titled Bless there Adventurers! concluding the story. However, they may yet be a sequel. On May 10, 2020, the author and creator of the series, Natsume Akatsuki, thanked his fans for enjoying the series on his Twitter account. He also stated to look forward to another story titled Sato Kazuma’s Counterattack, although Akatsuki states that this is a tentative title and could change.

So Kazuma’s epic fantasy adventure may not yet be over as there is a sequel or after-story of sorts in the works.

What do YOU think? Are you excited for a potential “Season 3” and what do you think the story will be?