2021 is here and with it, a new batch of anime to enjoy. Right now, we’re in the middle of the Winter 2021 season that lasts until the beginning of April.

When choosing a series to watch, I like to give a fair chance before judging the show as good or bad. Therefore, I always watch the first three episodes before giving my opinion. And I’ve handpicked five of the best for Winter 2021.

I got three runner-ups: Kemono Jihen; a series about a group of young half-monster private investigators solving supernatural crimes, Horimiya; a romance slice-of-life about two teenagers with secret lives known only to them, and finally, Higurashi – When They Cry Gou; a follow-up to the acclaimed series about strange events in a small mountain town.

My first pick is Otherside Picnic, a series adapted from the light novel series with the same name, completed by studios Liden Films and Felix Film. It’s about two college students who find the door to another world where eldritch monsters and urban legends are real.

The two students, Soraro and Toriko, explore this parallel world to find Toriko’s missing friend, Kozakura, but the pair become increasingly affected by this strange dimension and each other. It’s an interesting concept akin to a modern horror movie and the pale atmosphere adds a lot to the feel of the show.

Haikyu!! breathed some desperately needed new life into the sports anime genre. Following in its footsteps is 2.43: Seiin High School Boys Volleyball Team, currently being produced by the studio, David Production
– the same studio behind the anime adaptation of JoJo’s Bizarre Adventure.

The show is about a high school volleyball team led by the disgraced high school athlete, Kimichika Hajima, and the many tribulations they face together. The acting is pretty intense and the dialog between characters was so engaging that I couldn’t keep my eyes off. Before I knew it, the episode was over. 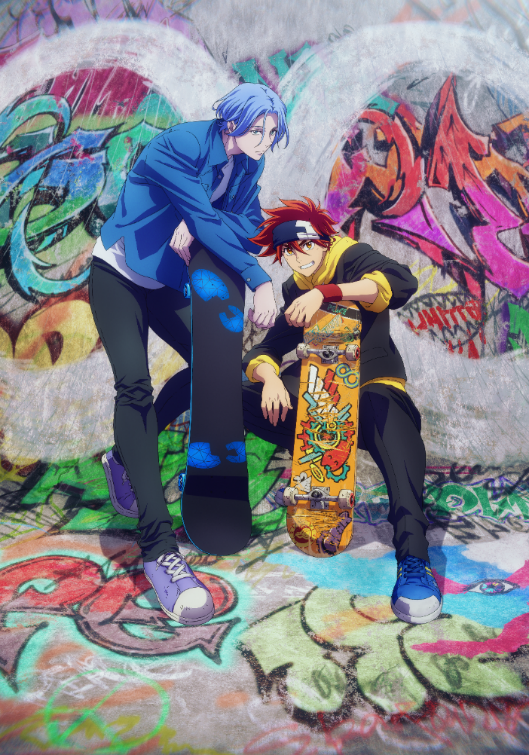 SK8 the Infinity by the legendary studio, Bones, is an original series about a group of hardcore skaters in Okinawa who hold secret late-night competitions called “S”. The story focuses on a talented skater named Reki taking the new transfer student, Langa, to “S” one night and then embroiling him into the world of skateboarding.

The best way to describe this series is to imagine Initial D but on skateboards and way more colorful. You can really see the passion and the effort the production team put into the show. As a result, we’re rewarded with a dynamic series.

Adapted from the light novel series with the same name, Jobless Reincarnation, and created by newcomer, Studio Bind, is about a hikikomori who is killed one night and finds himself reincarnated in a fantasy world with his memories intact. On the surface, this may seem like a typical isekai series but what sets it apart is the great direction and beautiful art.

This is a story about redemption and living with no regrets as the nameless hikikomori vows not to make the same mistakes he made in his previous life. I’ve seen criticisms about how the isekai genre is overdone and getting stale but series like Jobless Reincarnation show that the genre still has a few tricks up its sleeve.

The #1 series, I think, that you should not miss this season is Wonder Egg Priority, an original series done by studio CloverWorks– the same studio behind Darling in the Franxx and The Promised Neverland. The story is a coming-of-age story about Ai Ooto. One night, she wins a “Wonder Egg” from a gachapon machine. Later that night, Ai is sent to a wonderland and tasked to save the girl who appeared from her Wonder Egg.

It’s hard to elaborate on just how beautifully animated this series is and how engaging the plot is. I knew from episode 1 that this would be my number one choice.

What do you guys think? I hope you find something good here. Let me know what your picks for the Winter 2021 season are. I’d love to look into them myself.