Autumn is here and you know what the means: Fall 2021 Anime has arrived, bringing old favorites and new shows.

This list was pretty tough to whittle down as this season is stacked to the ceiling with awesome picks, so I’m also going to give honorable mentions before the top five.

In no particular order, the honorable mentions are Demon Slayer Season 2, Digimon Ghost Game, My Senpai is Annoying, Sakugan, and The Faraway Paladin.

Kicking things off is the second part of Jobless Reincarnation. The first part aired at the beginning of the year and I fell in love with it instantly. I’m normally not a big fan of isekai because I feel studios get lazy with them, but Jobless Reincarnation does a fantastic job at incorporating isekai ideas and making the series’ world feel alive with lovable characters and an engaging plot.

We follow our heroes trying to get back home after being whisked away to a far-off continent. Along the way, the group has to deal with fighting human traffickers, monsters, and a vengeful god. I’m loving this show and I’m planning on picking up the light novels.

The adaptation of the sixth JoJo comes out in November and I cannot wait for that day. JoJo’s Bizarre Adventure is a long-running manga that came out all the way back in 1987 on Weekly Shonen Jump, and since then, it’s gone on to be an extremely influential and beloved franchise. The anime is extremely popular and is one of my all-time favorites.

So you can imagine how excited I am for “Part 6”. Stone Ocean stars Jolyne Cujoh, the daughter of the series face Jotaro, as she is wrongfully arrested for a murder she didn’t commit and now has to survive prison and an evil priest hellbent on destroying the world. Part 6 has some of my favorite fights and Stands, and I can’t wait to see this drawn out in the studio’s amazing style.

Komi Can’t Communicate is my pick for the best chill anime of the season. It’s a romantic comedy about Shoko Komi, who her classmates think is this ephemeral and silent beauty who can do no wrong. In actuality, Komi has a pretty bad case of social anxiety and she has a tough time reaching out and communicating with other people.

Then in comes Hitohito Tadano, Komi’s classmate, who learns of her social anxiety and decides to help Komi with her dream of having 100 friends. The series is rife with hilarious moments, great characters, and gorgeous art.

Just in time for Halloween is the horror-comedy series, Mieruko-chan. The name of the series translates to “The Girl Who Can See Them” which is incredibly fitting as the main character Miko has the unfortunate ability to see horrifying ghosts and monsters that haunt her and her friends. Despite this, Miko does her best to ignore these ghosts and live out a normal high school life. 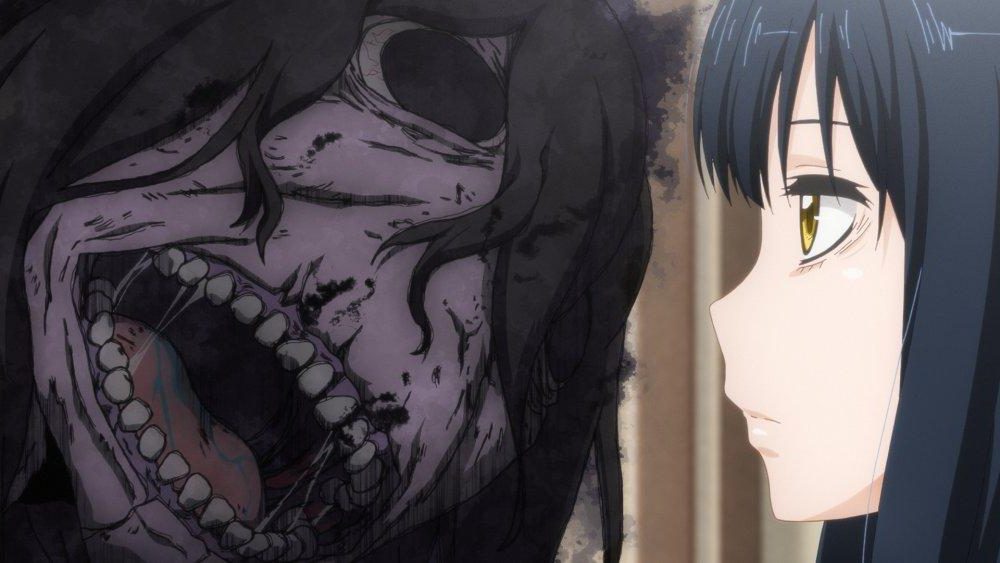 The manga’s artwork is fantastic and portrays the ghouls that haunt Miko with horrifying detail. That art style translates well to the anime as the ghouls are really freaky looking and Miko’s deadpan reaction to these things staring her in the face is legitimately hilarious.

My number one pick for the season is Takt Op. Destiny. The story takes place on a post-apocalyptic Earth where aliens crashed on the planet from a meteorite and started to run rampant. For whatever reason, the monsters were drawn to music so the governments of the world banned music as they sought to fend off this alien invasion.

To fight back are these young women called Musicarts who have the power of music and can destroy these aliens. Our heroes yearn to return music to the world and decide to fight back using the Musicart known as Destiny to eradicate the aliens and save Earth.