Studio Mappa is 10-years-old! The MAPPA 10th-anniversary stage event unveiled a teaser visual, trailer, and staff details for their anime with Madhouse. The original anime is currently scheduled for release on October 5. If you are familiar with Mappa’s history, you will recall that 10 years ago, studio MAPPA was created by ex-MADHOUSE founder and producer, Masao Maruyama.

Now, the studio is uniting with Madhouse to co-produce an original TV anime titled takt op.Destiny! This collaboration has a pretty strange name.

The plot is also strange in itself being that it follows a group of heroines dubbed “Musicart” that uses classical music to fight their battles for them.

Studio Mappa and Madhouse are household names in the anime industry, both credited with a long list of hit anime.

Madhouse has produced the likes of Hunter x Hunter, One-Punch Man, Hajime No Ippo, Paranoia Agent, and Trigun while Mappa has anime like Jujutsu Kaisen, Attack on Titan, Dorohedoro, and Dororo. So, there is, unsurprisingly, a real feeling of excitement about what these giants will create here.

takt op.Destiny is part of a previously announced mixed-media project produced by Bandai Namco Arts and DeNA, which also includes an RPG mobile game slated for release later this year.

The trailer features Kouki Uchiyama (Horimiya) in the main role as Takt Asahina, a Conductor who forms a contract with “Musicart” girl (aka Destiny) as they battle with classical music. It will be interesting to see how classical music is incorporated into this partnership between Mappa and Madhouse. 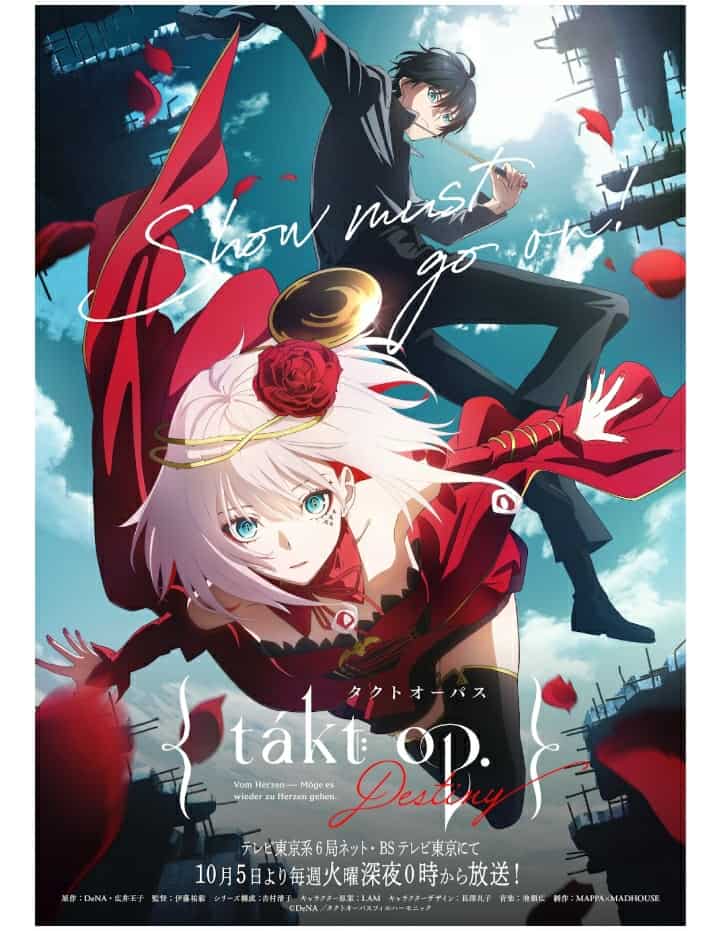 Amongst the staff is Yuuki Itou (Granblue Fantasy: The Animation) who will be serving as Director with Kiyoko Yoshimura (Riddle Story of Devil) on series composition, Yoshihiro Ike (Kuroko’s Basketball) as the music composer, and Reiko Nagasawa (Overlord III monster/sub-character design) as character designer with original designs by LAM.

Are you excited about this show? Will you be seeing it when it airs?

Advertise with us
342
likes / shares
FacebookTwitter