Why Are Fruits So Expensive In Japan?

Christmas is a magical time of the year for everyone. It’s a time where friends and family gather to celebrate, cheer, and dine on good food and drinks, reflecting on the year that’s gone and anticipating the year that’s to come.

Many people will associate Christmas celebrations with families slogging away for hours in the kitchen to present the perfect roast come dinnertime. In Japan, it couldn’t be more different!

When you’re celebrating Christmas here, the right and only way to do so is with KFC.

Yep, you read that right!

Christmas and KFC go hand in hand in this weird and wonderful tradition in Japan, and if you want to celebrate it properly, we suggest you get planning!

How KFC for Christmas Tradition Began

This tradition actually started in the 1970s, when Takeshi Okawara, the first KFC manager in the country, overheard foreigners lamenting about how they missed their Christmas turkey tradition back at home. The cogs in his brain started turning, and next thing you know, KFC churns out its first-ever “party bucket” for a Christmas campaign.

Many years later, this national Christmas campaign took KFC to new heights and it’s never looked back since. This tradition is deeply ingrained in the culture now, and it’s even advised that if you want to get in on the Christmas Day special, you will need to book weeks in advance!

Not only that, when you head into the store to pick up your food, expect there to be queues full of other anticipating families. KFC Japan’s Christmas sales are so intense that they apparently account for one-third of national revenue every year!

Over time, to address the demand issue, KFC has stretched their campaign out to weeks before the actual Christmas day. If you’re not too fussed about celebrating on the actual day, or just want to take advantage of the KFC Christmas “party bucket”, you can opt to purchase it in the days leading up to Christmas. 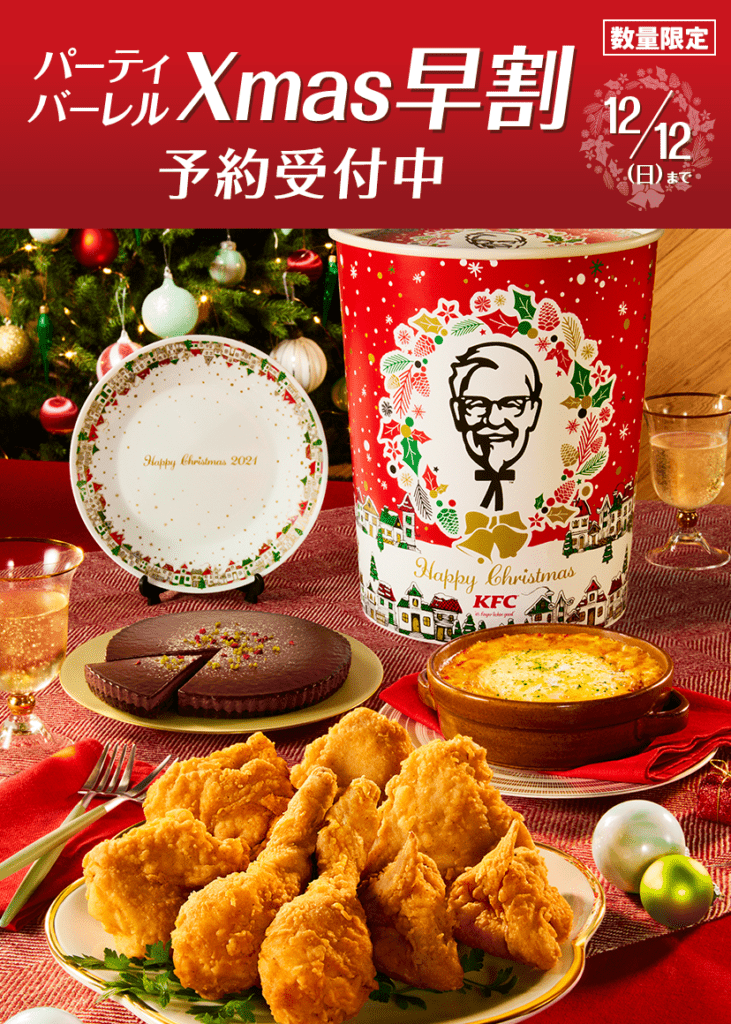 USA Fast Food Chains in Japan, What do They Look Like?

Over the years, KFC has evolved whilst introducing various different party packs for Christmas. From buckets made entirely of fried chicken to huge family packs that consist of roast chicken and multiple sides, it’s a gift to the people every year. Of course, the sizes of these party buckets range from small 2-people buckets to larger family-sized packs, so it doesn’t matter if you’re celebrating with one, two, or 10 people – there’s a Christmas pack for everyone.

Surprisingly, KFC is not that cheap in Japan. Whilst it is considered an affordable fast-food option all around the world, KFC is rather esteemed and is more of a reward meal in Japan. Hence, expect a heftier than usual price tag!

Reading that the Japanese experienced a frenzied Christmas may be surprising to some, especially when only 1% or less of the population are actually Christian. However, the Japanese people adopted this tradition like a duck to water and haven’t looked back since.

Foreigners may not understand this but eating KFC on Christmas day does bring pure joy to Japanese families. So, if you’re celebrating Christmas in Japan for the first time, you won’t want to miss out on this tradition. Firstly, who doesn’t love KFC? And also, consider it a rite of passage to becoming a seasoned Japanese traveler, as it does only happen once a year, so if you’re there during this particular time, be like the Japanese and eat KFC for Christmas!