The first promo video for the upcoming Isekai anime, In the Land of Leadale, was first unveiled in August.

Recently, it was confirmed that the anime will premiere on January 5, 2022. Some cast and staff were also announced.

The official website for the television anime of Ceez and Tenmaso‘s In the Land of Leadale (Leadale no Daichi nite) light novel series has posted the anime’s second promotional video.

A lot of information that fans have been dying to know has now been revealed. The video announces and previews the opening theme song “Happy encount” by singer, TRUE.

The previously announced cast are: 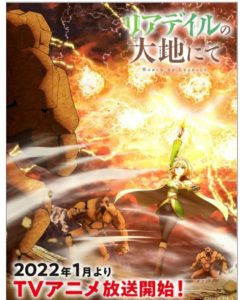 The staff team is made up of –

The anime will premiere on the Tokyo MX station on January 5. Crunchyroll will stream the anime as it airs.

Is this an anime you’re excited for?

To join a community of fellow anime lovers and stay aware of industry news, find us on Discord, Facebook, and Twitter!