Having spent over a year with my Huawei Mate X2, I have found many things I love and hate about this phone.

Most of what I disliked about the Mate X2 is software related, while most of the things I loved are hardware related.

When the Honor Magic V was about to launch, many techtubers and rumor websites hyped it up as if it would be the answer to the Google ban.

However, at this point in time, the Magic V has been nothing but a disappointment.

What does the Magic V do BETTER than the Mate X2?

In terms of hardware, the devices are strikingly similar. The Honor Magic V (we’ll just call it the Magic V from now on) opted to not copy the Mate X2’s asymmetrical shape.

This was most likely a money saving decision as it would be more complicated to fit components into a wedged shape cavity, but this also means that the phone’s weight is no longer balanced in the user’s palm like the X2 was.

The Magic V’s flat edges are an improvement over the Mate X2’s rounded egdes, as it feels like you’re holding a more solid phone in your hand. Getting a grip to open the phone is also easier on the Magic V since the edges are flat instead of round.

Pretty much the only thing I liked about the Honor Magic V or the Mate X2 was the flat edges vs the round edges. The kickstand on the Magic V is also better, but that’s really a case issue, not the phone’s problem.

Past this point, there is NOTHING about the Honor Magic V that is superior to the Huawei Mate X2!

The Magic V Camera is Terrible

While the Magic V has the awesome form factor of the X2, just about everything else falls short.

The wide angle on the Magic V is wider than the Mate X2. But the image quality, saturation, and sharpness is all a downgrade from the Huawei (in my opinion). 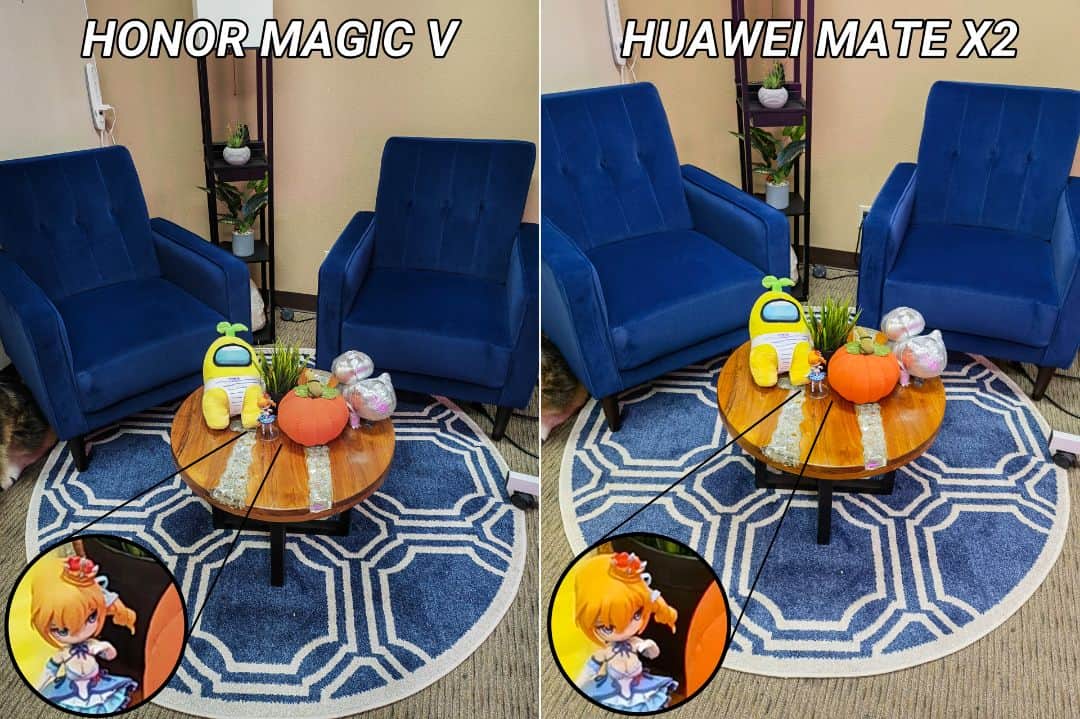 White backgrounds (or carpets) appear to look dirty and dull on the Honor Magic V.

The image processing seems to be trying too hard to apply more dynamic range, which makes everything look dirty and dull! Having more dynamic range (in some situations) doesn’t always mean a better looking final image.

Look at how nicely the blues in the chairs pop off the screen on the Huawei Mate X2 vs the Magic V. Everything just looks better, even if the image appears more saturated and blown out than the Magic V. 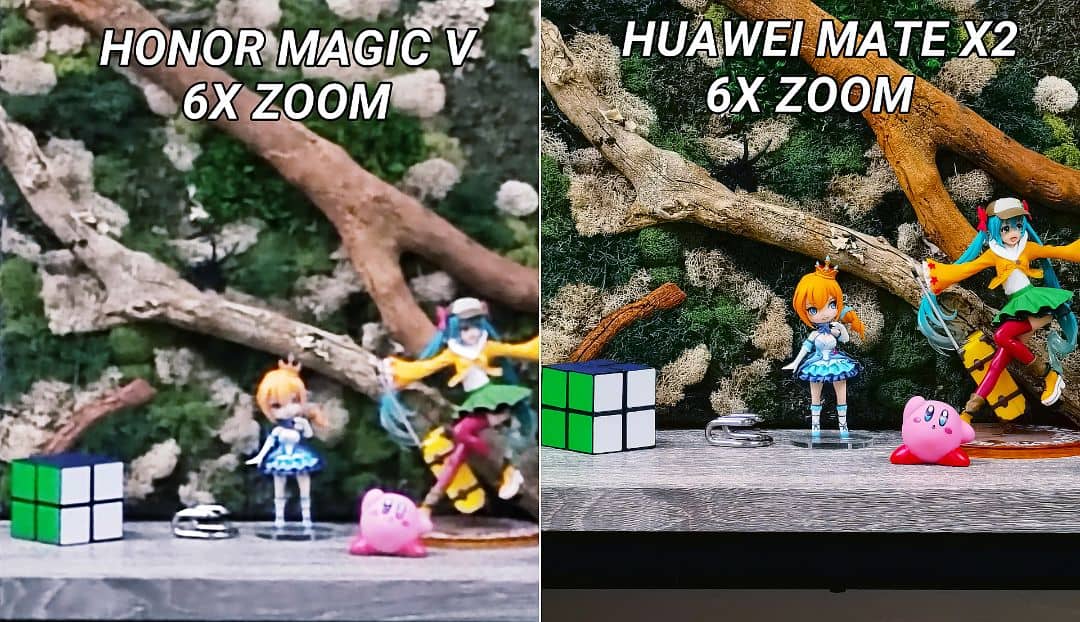 Even compared to really old phones such as the Huawei P30 Pro, the Honor Magic V feels like they just included cameras for the sake of a specs sheet rather than to give any real value to the user. 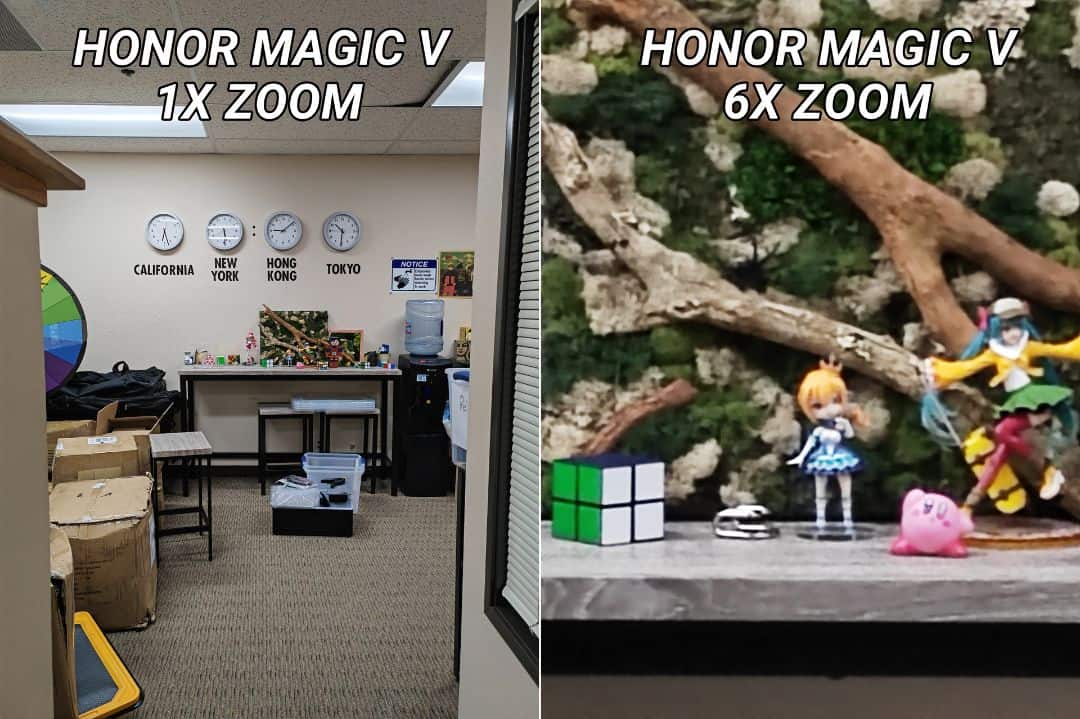 The maximum zoom on the Magic V is 10X (3X optical) and to be honest they should have capped it at 3X because the resolution even at 6X zoom level is practically unusable. Who would ever use any photo taken at 6X+ on this phone? 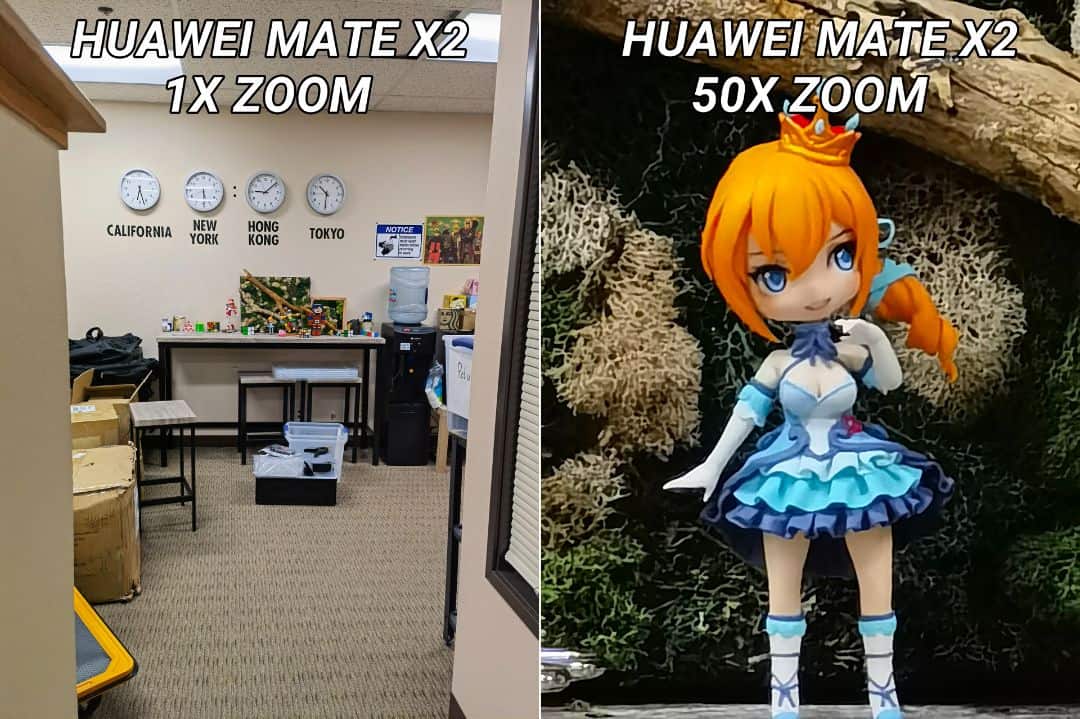 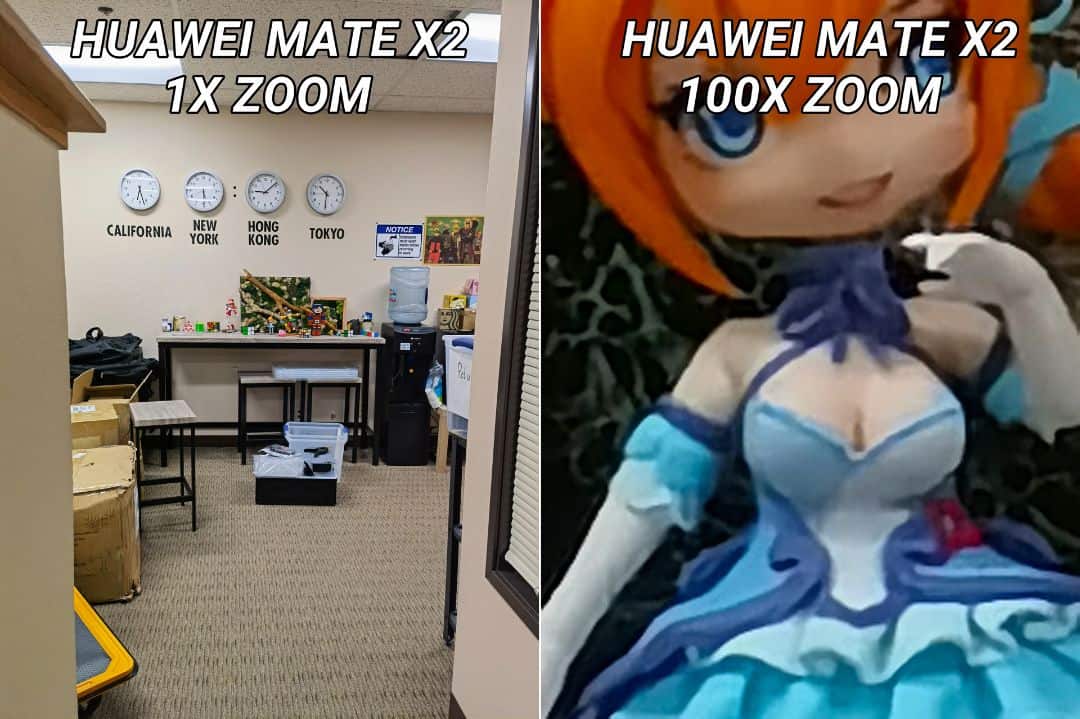 The Mate X2 offers more usability at 100X than the Magic V can give at 6X. This should really tell you something about Honor’s priorities.

One thing to note about the Mate X2 is that the 100X zoom is amazing and totally usable on photo mode, however there seems to be no stabilization for the 10X+ zoom lens in video mode (as seen in the video above). 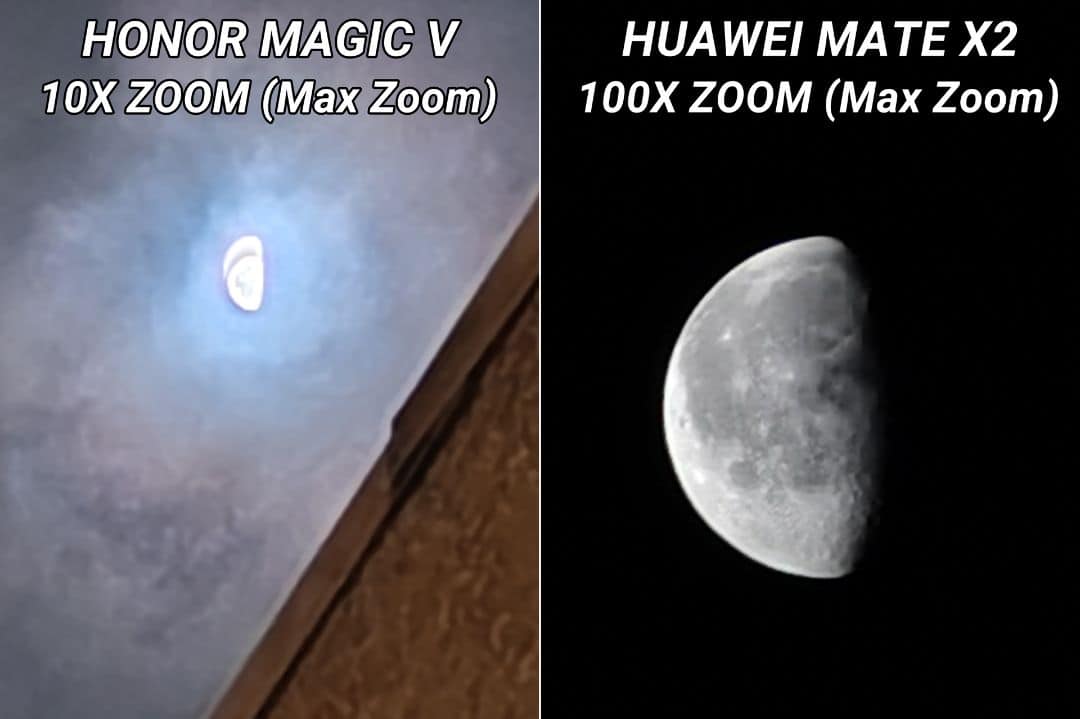 Does the Magic V have Google?

No, at the point of writing this review, the Honor Magic V does NOT have Google services. ANY seller on Aliexpress, eBay, Alibaba (or any other website) who claims that the phone is GMS compatible is either misinformed or lying to you! 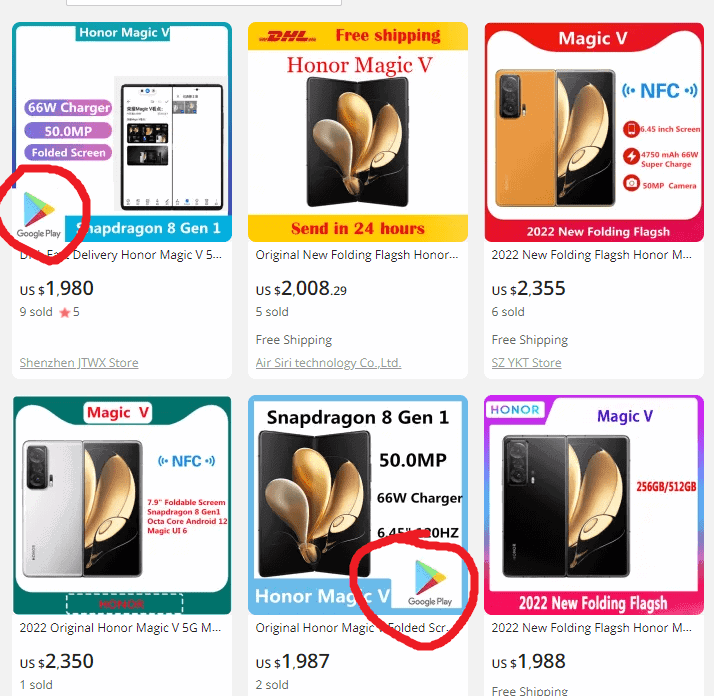 Just look at dishonest and misleading these sellers are, to photoshop a Google Play logo into their listing thumbnail in a pathetic effort to trick people into buying a $2000 phone!

Do NOT support people who intentionally mislead and lie. These sellers will try and justify themselves by saying that “no google services” was buried deep at the bottom of their listing description. 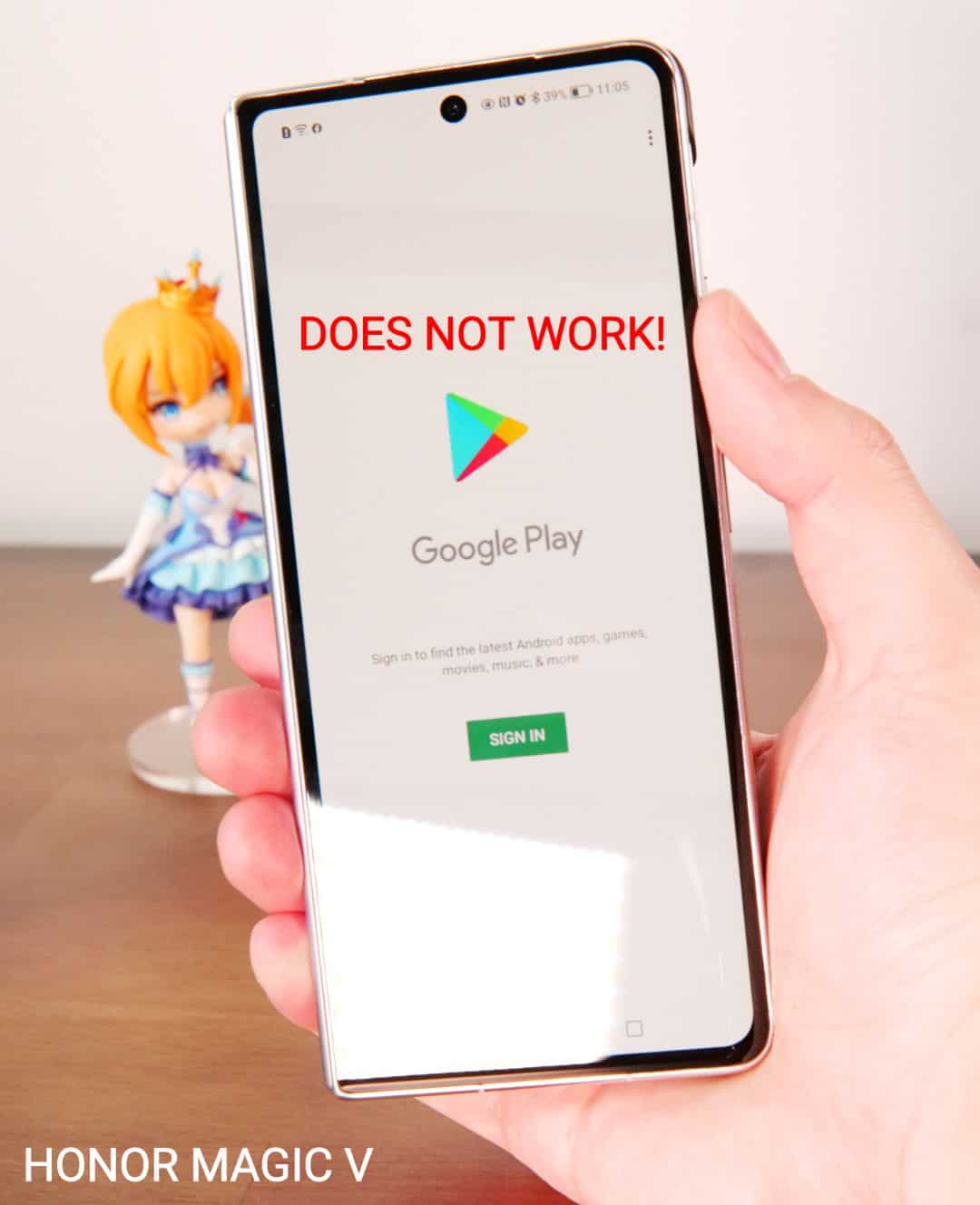 Google Play services does NOT work on the Honor Magic V (at least at the time of posting this article).

Even though the software running on the Magic V is clearly a clone from the Mate X2, whatever tweaks Honor did to their software renders the methods for enabling Google Services useless.

More Details About Google Hacking for those who are interested

Basically, one of the main methods used for hacking Huawei phones involves restoring a hacked phone backup, installing MicroG, and adding your Google Gmail account to your device.

After that, there is a process of slowly replacing all the MicroG applications with real Google Services Framework applications. If you mess up any step in this process, you might have to start over from square one!

In the case of the Honor Magic V, the first step of running the backup can’t be done. I attempted to skip this step and move on to other steps along the process, but everything breaks down once MicroG is replaced with Google Services Framework (GSF). The moment MicroG is uninstalled, the Google account that was bound to the device is also removed.

Now you can see how this could be extremely frustrating and also hopeless.

There is no Hope for a Google hack

For those of you who were duped into buying a Chinese version of the Honor Magic V, I would probably sell that phone as fast as possible if I were you.

If these guys can’t offer a solution for Google Hacking, why would you trust tech YouTubers who actually know nothing about tech and simply regurgitate instructions from others?

HTC U11 “Highest Rated” Phone Camera Put to the Test!

(Most) Tech YouTubers are the worst people to get information about phone hacking from because they only care about getting views. They will often say that their methods can be used on Honor phones without ever trying it for themselves, without even validating their information.

They don’t care, they just want views and ad revenue.

The same applies to tech / rumor websites. Do not trust their lies, they only care about making headlines and getting clicks (possibly even selling phones through their affiliate links), they don’t really care about validating their information.

Or worse… Bought off by these companies to make press release type posts?

The Huawei Mate X2 has been around for over a year

The Mate X2 has a much larger following than the Honor Magic V, and in the 12 months that this phone has been out, there are multiple reliable methods to get Google Services running on the device. 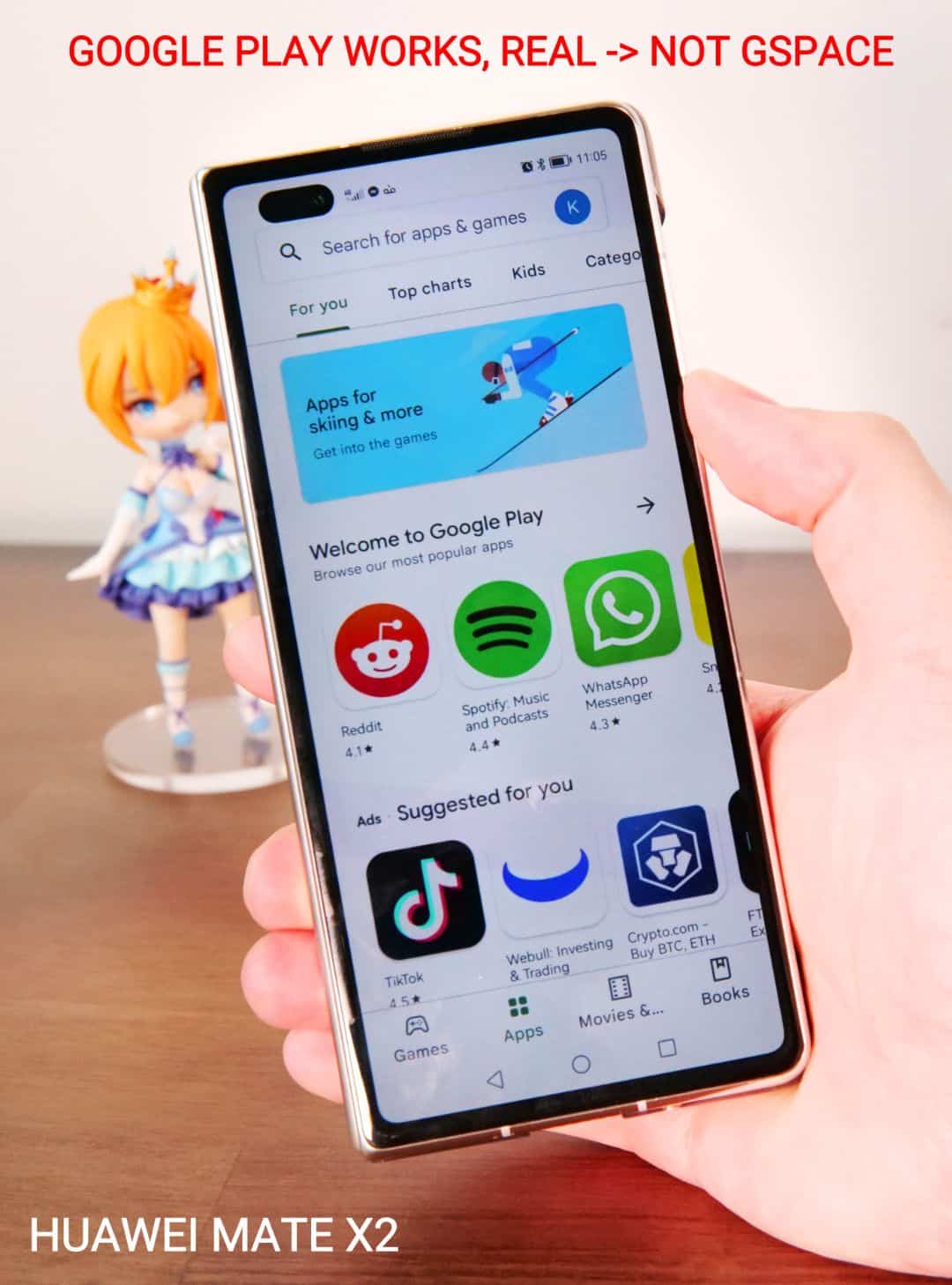 The Honor Magic V has an Inside Camera 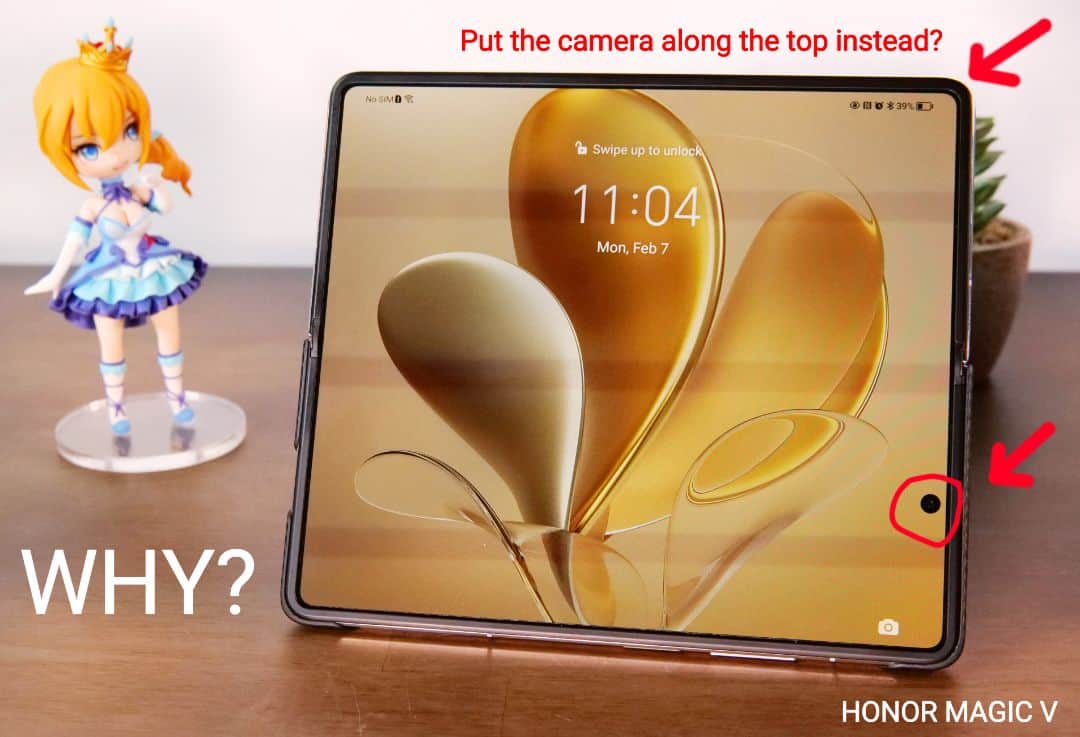 Having an inside camera is nice for things such as zoom calls and video chat, however the placement of the internal camera is questionable.

If you watch videos on the device, then the camera will most likely always be intruding on your video. Yes it’s the corner of the video, but it still seems like a very awkward position to have the camera.

One of the main advertising points of the Magic V is the inclusion of the new Snapdragon 8 Gen 1 chip.

However, the phone appears to be bottlenecked by the slowness of its internal memory. So even if the processor is faster than the Mate X2, something about the internal memory access still feels extremely slow and buggy (see my comparison video above).

As a result, the Magic V does not feel faster than the Mate X2 in any real perceivable way.

I strongly recommend not to purchase the Magic V. It is a waste of $2000 for anyone who wants a serious pho0ne.

Of course, this entire post is 100% my own personal opinion based on my experience, nothing here is presented as fact. Google support may change in the future.

The Honor Magic V is a step in the right direction of foldable by offering a normal form factor, something Samsung just can’t seem to get right.

However the Honor Magic V also seems like a huge missed opportunity to have GMS capabilities and most likely this phone will become an obscure footnote in the history of foldable, overshadowed by the Mate X2 and all of its engineering spectacle.

We are not sponsored by Honor or Huawei and we don’t have any affiliate links on this article. We aren’t trying to sell you any phones here. Make your own decisions and always do your own research!

Advertise with us
35
likes / shares
FacebookTwitter