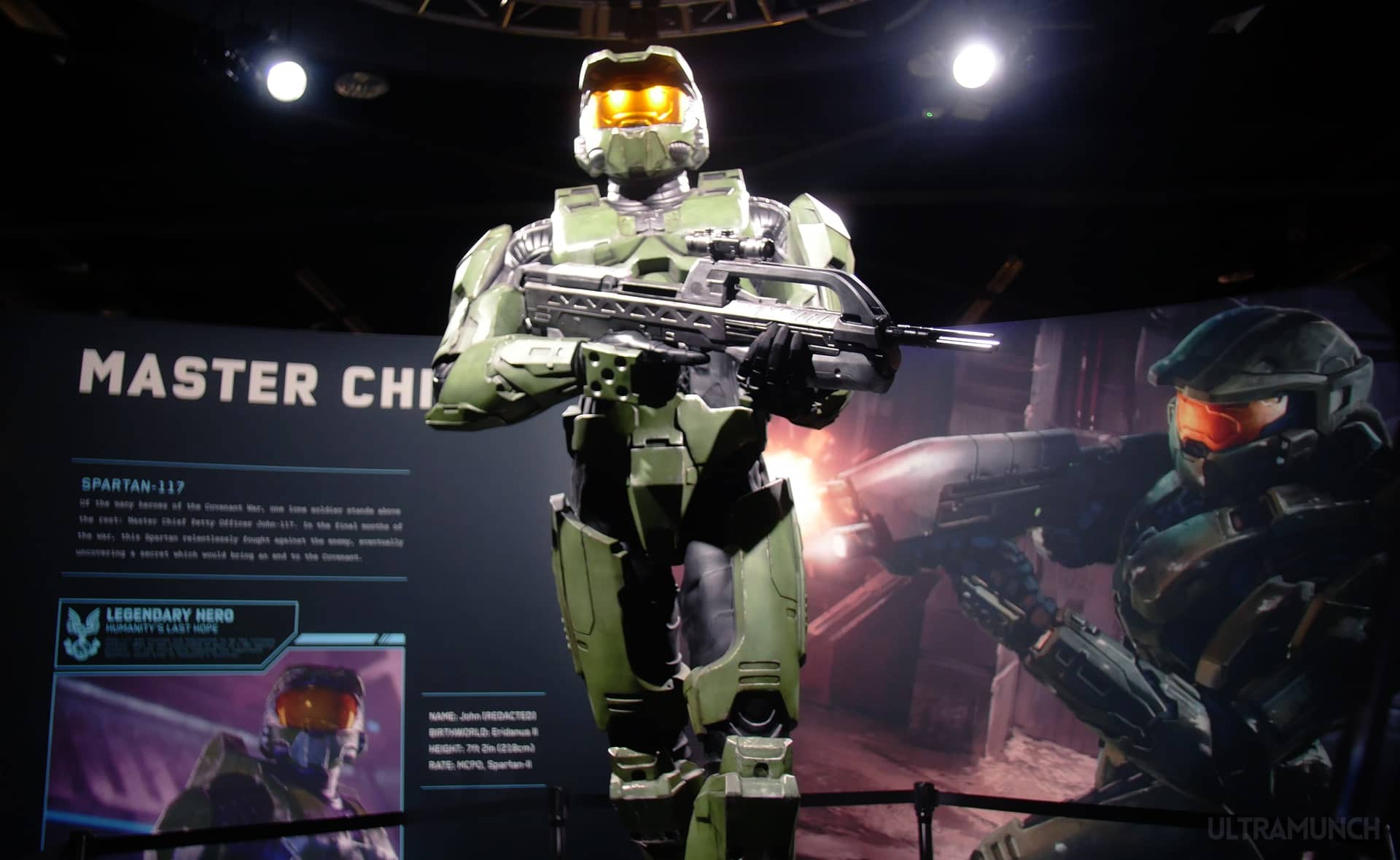 Junji Ito Fans Are Ready To Be Sucked Down The Spiral

There’s nothing like seeing fans get together for a convention.

The nice thing about Halo Outpost was that the event was concentrated around a single fandom and it wasn’t very crowded, which ruins practically every convention.

Upon entering, you’ll be greeted with a very dark environment. The lighting is very low and displays are put around which you can enter and view freely, no lines or waiting times for these attractions. 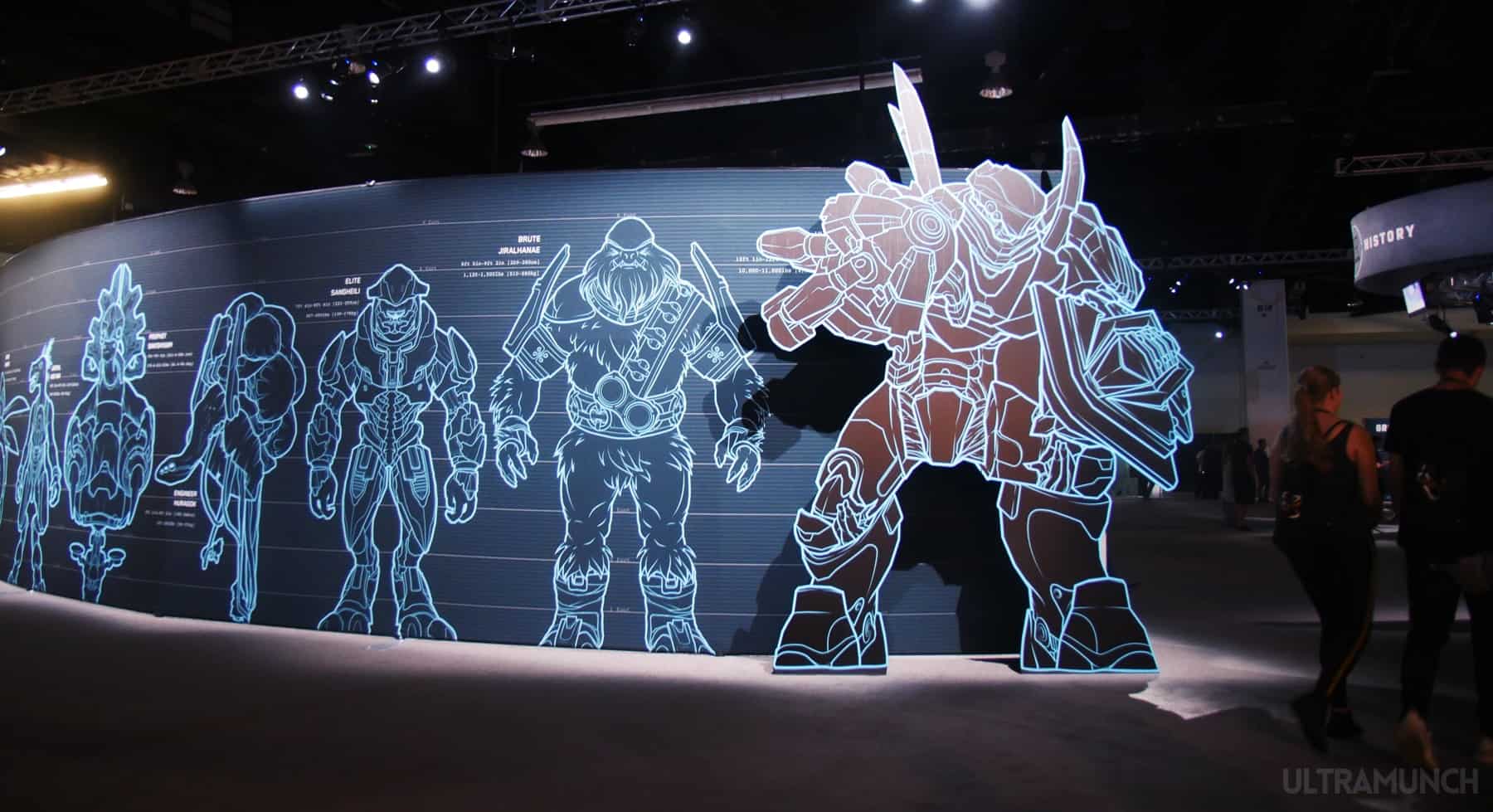 Seeing the actual size of an elite, brute, and hunter really helps put things into perspective. All the displays around the show floor are done as if it were a museum for the lore. 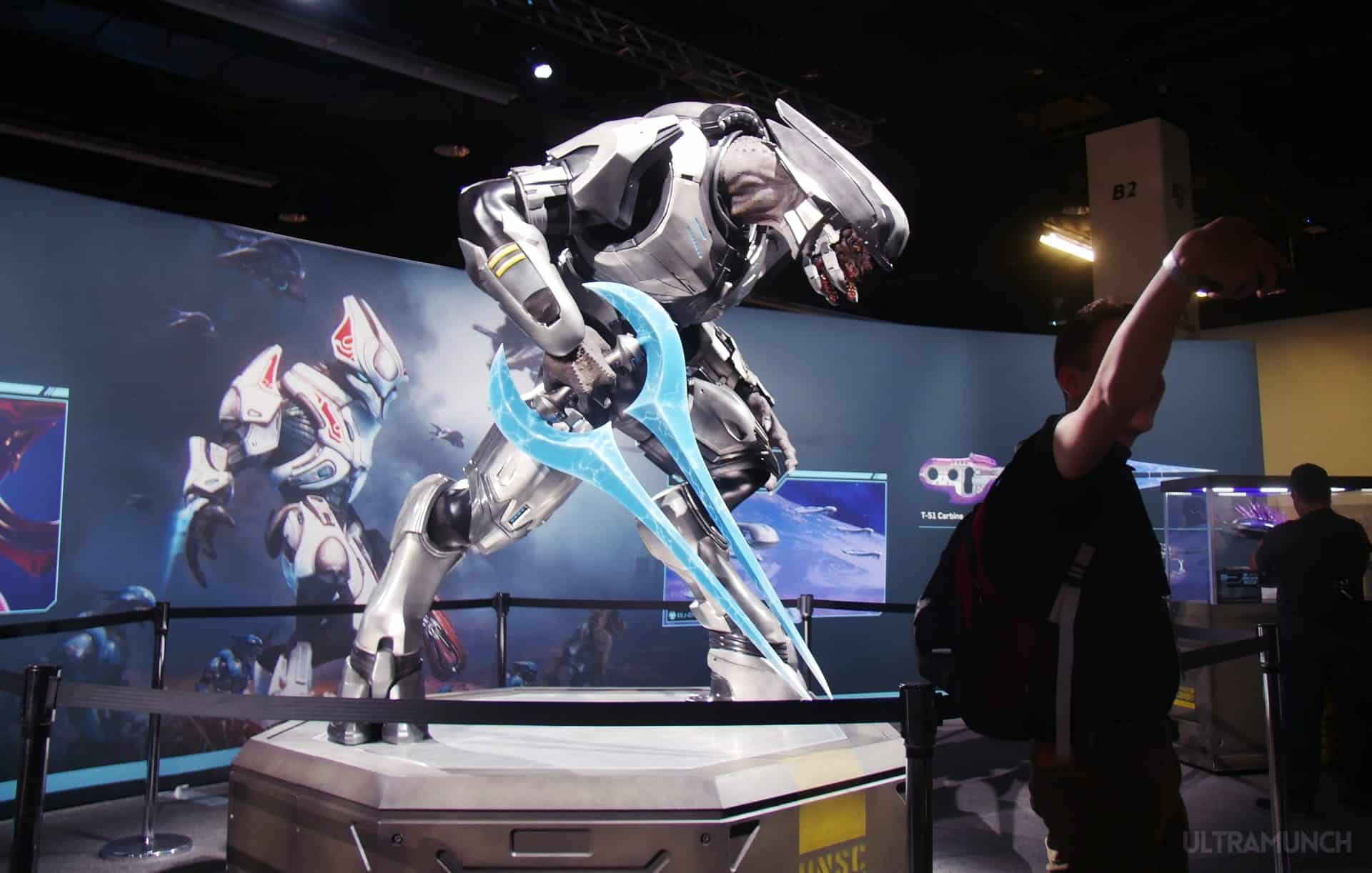 An elite towers over everyone.

Of course, the chief is pretty massive himself!

Many, very realistic replicas of the weapons can be found throughout the exhibit. I particularly love the covenant weapons because of how detailed and “alien” they appear. 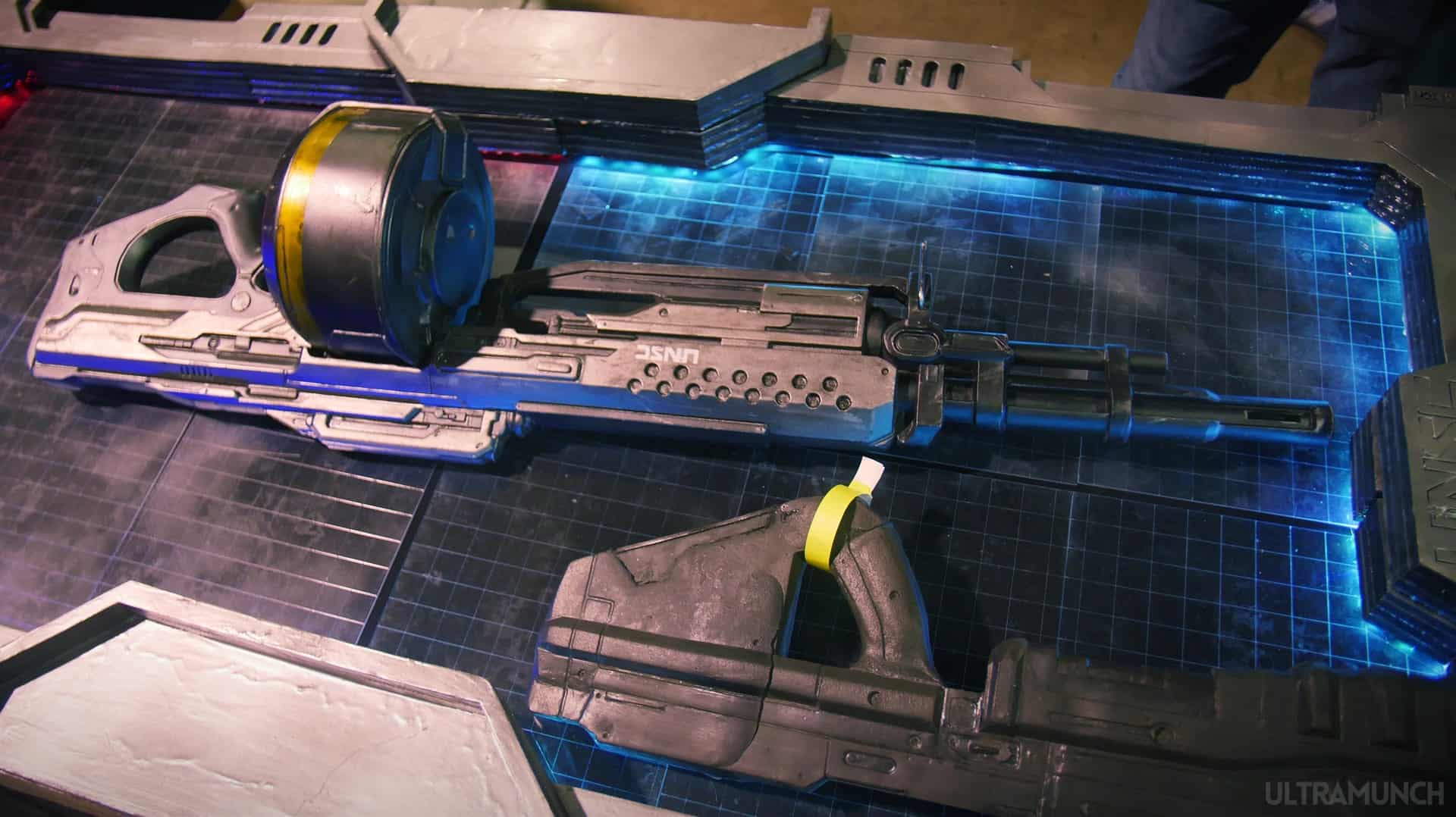 More weapons can be found at a location called the “Armory” which appears to be a safe space for the cosplayers to dress up and have their equipment. The weapons pictured (above) and (below) are fan made props. 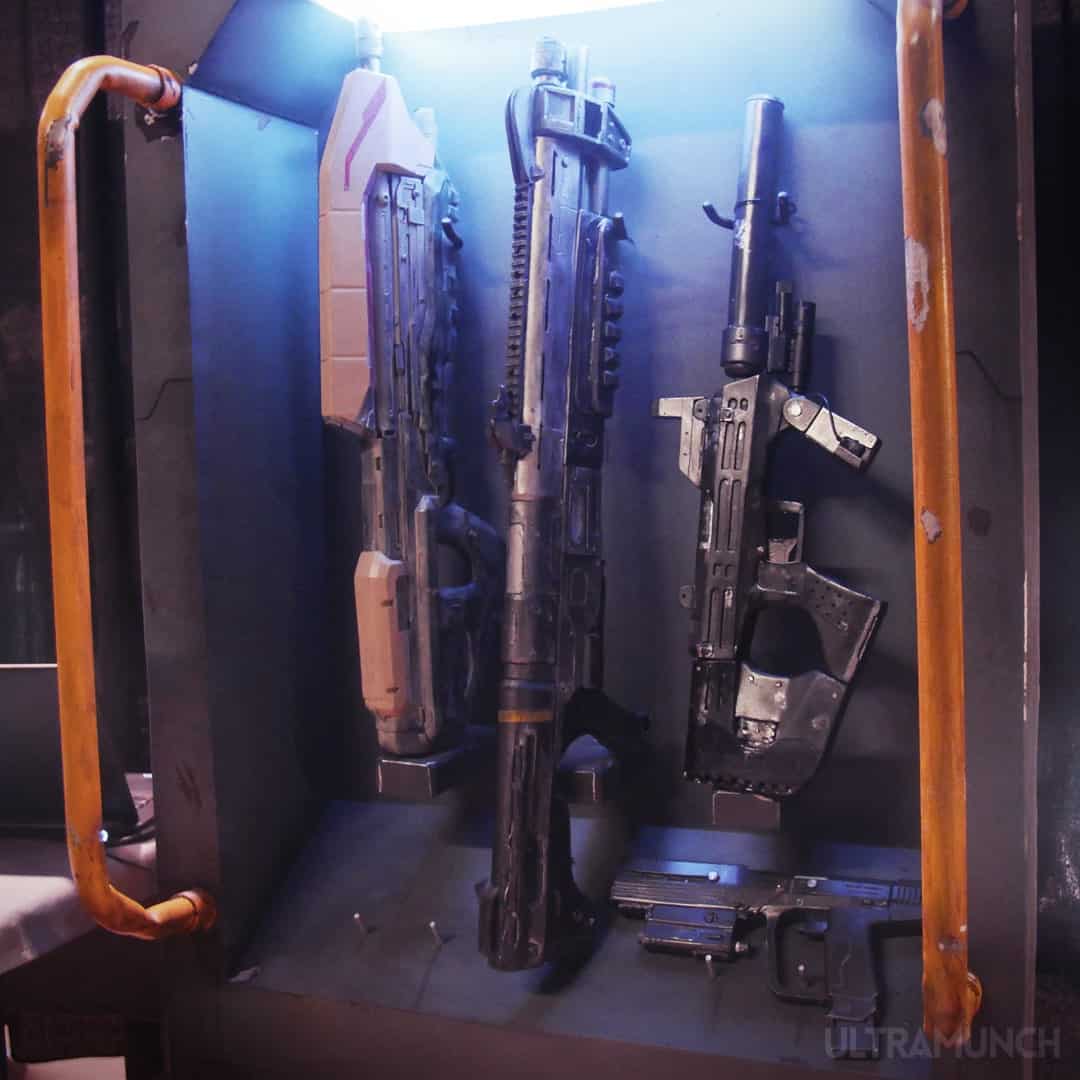 The silenced SMG, one of my favorite weapons in the game (ODST and Halo 2 Anniversary Multiplayer).

Unfortunately, one disappointment about weapons on display is that not ALL the weapons were shown here, in fact, not even half the weapons from the Halo series seemed to be present!

I didn’t see any brute weapons (hammer would have been cool) and besides the Needler (and the sword in the Elite’s hand), there wasn’t really any other covenant weapons on display! 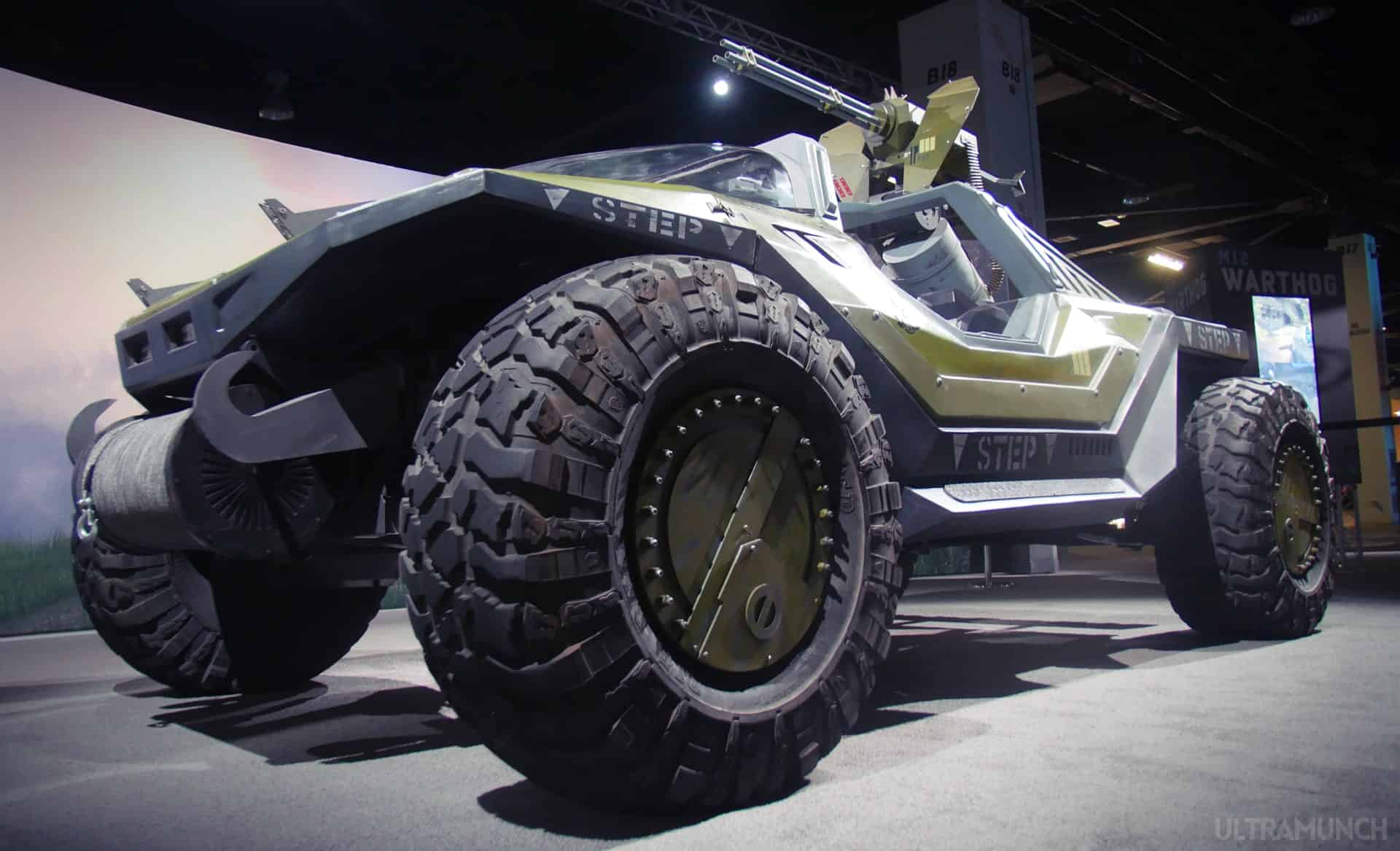 I heard that this Warthog actually drives! 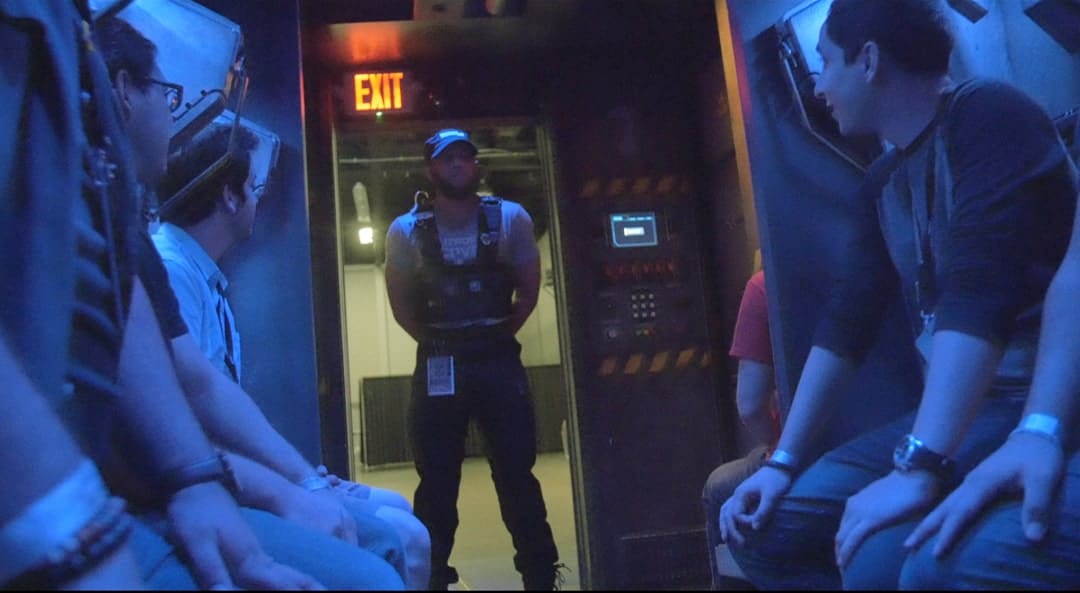 The Pelican was, in my opinion, one of the least fun attractions. It wasn’t a ride, there was no motion happening inside the Pelican; instead all 8 people have to work together at a screen to perform “puzzles” that involved mostly pressing buttons when prompted to do so.

Unfortunately our group “failed” even though the guy that supposedly didn’t flip the right switch did flip it (I have it on video.) So our Pelican ride ended early after waiting 45 minutes in line. The prize if you win is a dog tag, so in my opinion, this isn’t really worth it! 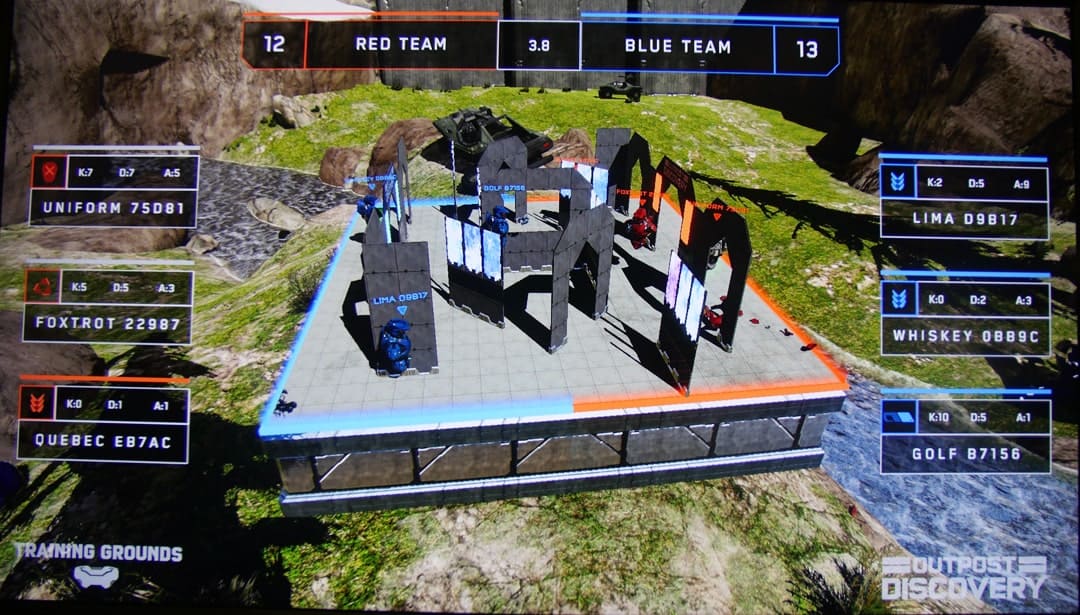 This was definitely worth the wait! A ton of fun walking around with the VR backpacks (which are basically entire computers on our back!)

3 vs 3 players run around a small arena, armed with plasma pistols competing in a timed match, you are randomly assigned a gamer tag.

The Halo VR attraction has two simultaneous games going on, so the line seemed to move quick (we waited about an hour).

Our team got destroyed! It was still quite a fun and interesting experience which was totally worth the wait! One complaint I had was that the response time, from pressing the trigger to the actual gun shooting, felt delayed. I don’t think it helped that our controller’s batteries were at low, but the delay felt very noticeable at times. 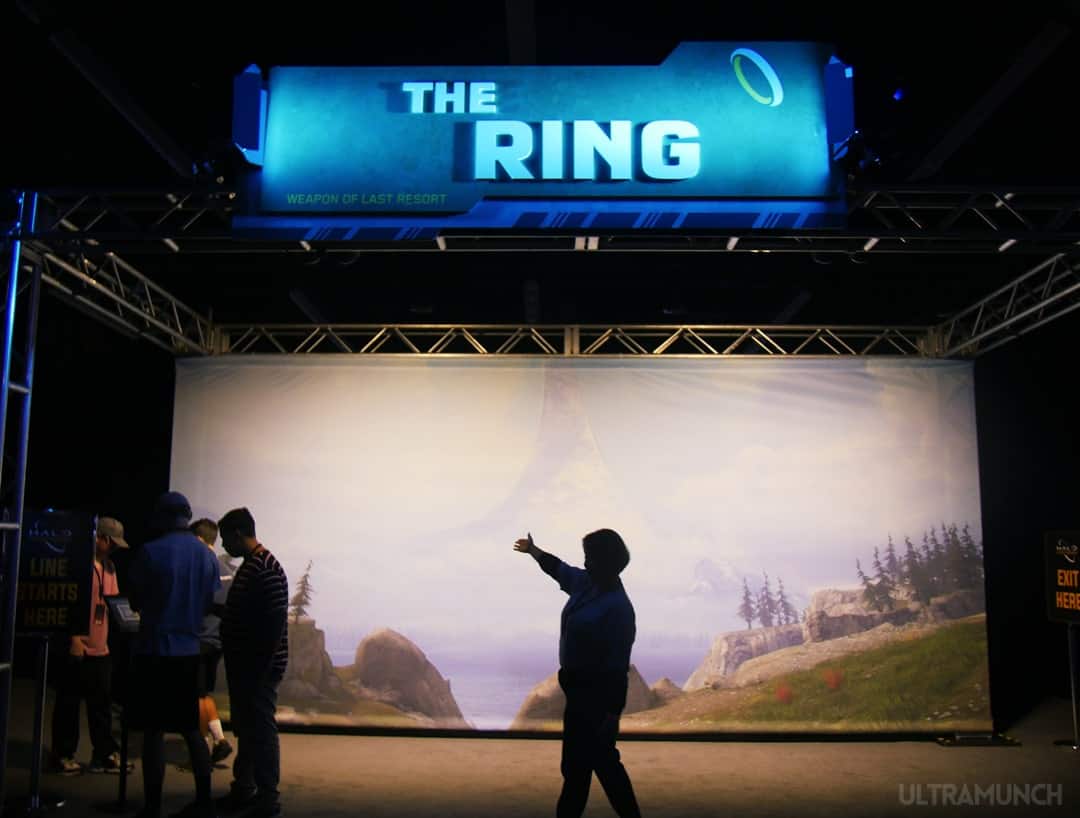 The Ring attraction is surrounded completely by black curtains. It actually does not stand out at all because the entire room is dark. However, The Ring was by far the most interesting and underrated attraction at this event!

Even if the line looks long, it moves fast since 10 – 15 people can enter at a time. 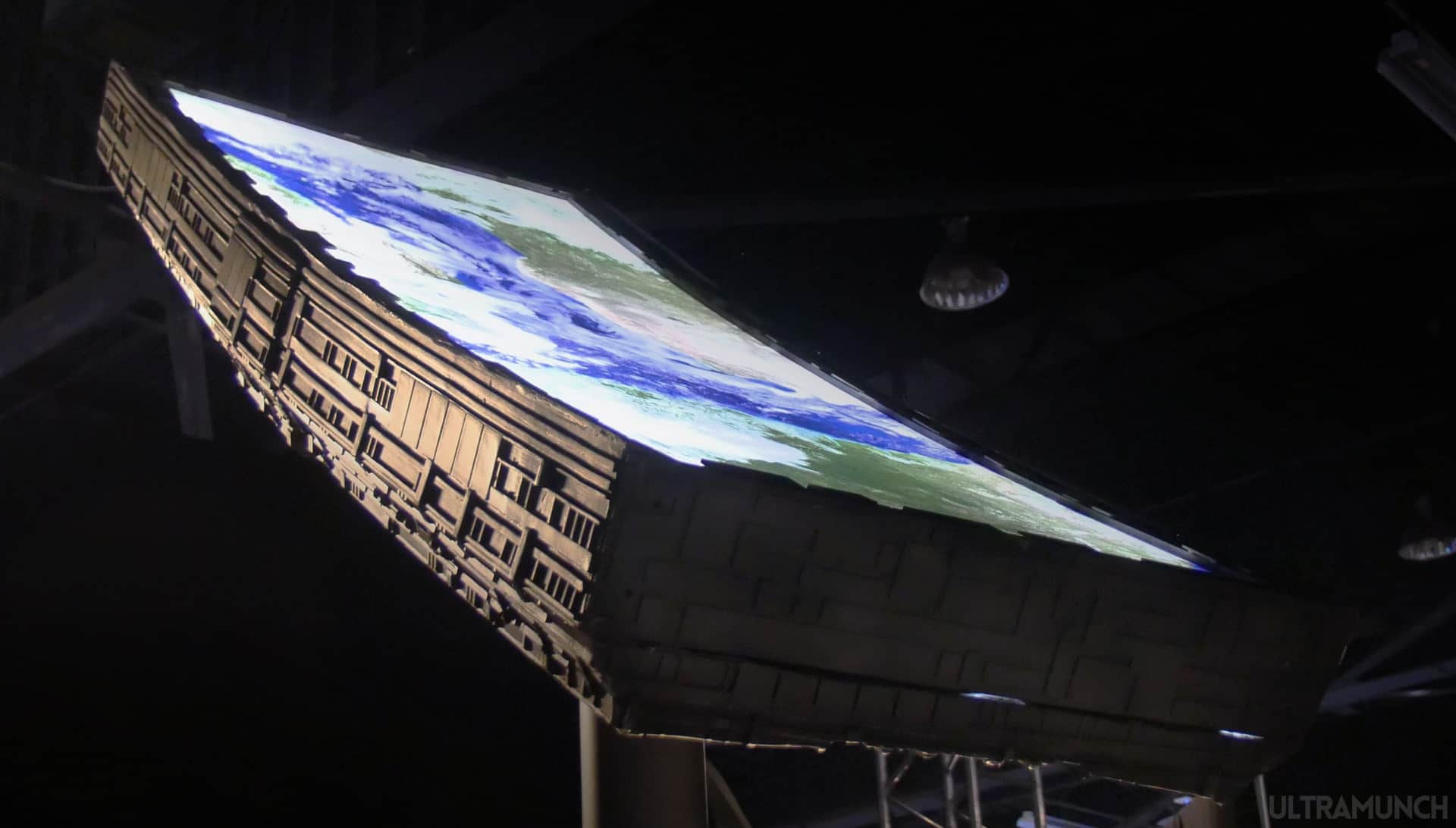 You wear these special headphones and get guided through various rooms with “artifacts” and audio which explains in an interesting way what these things are. 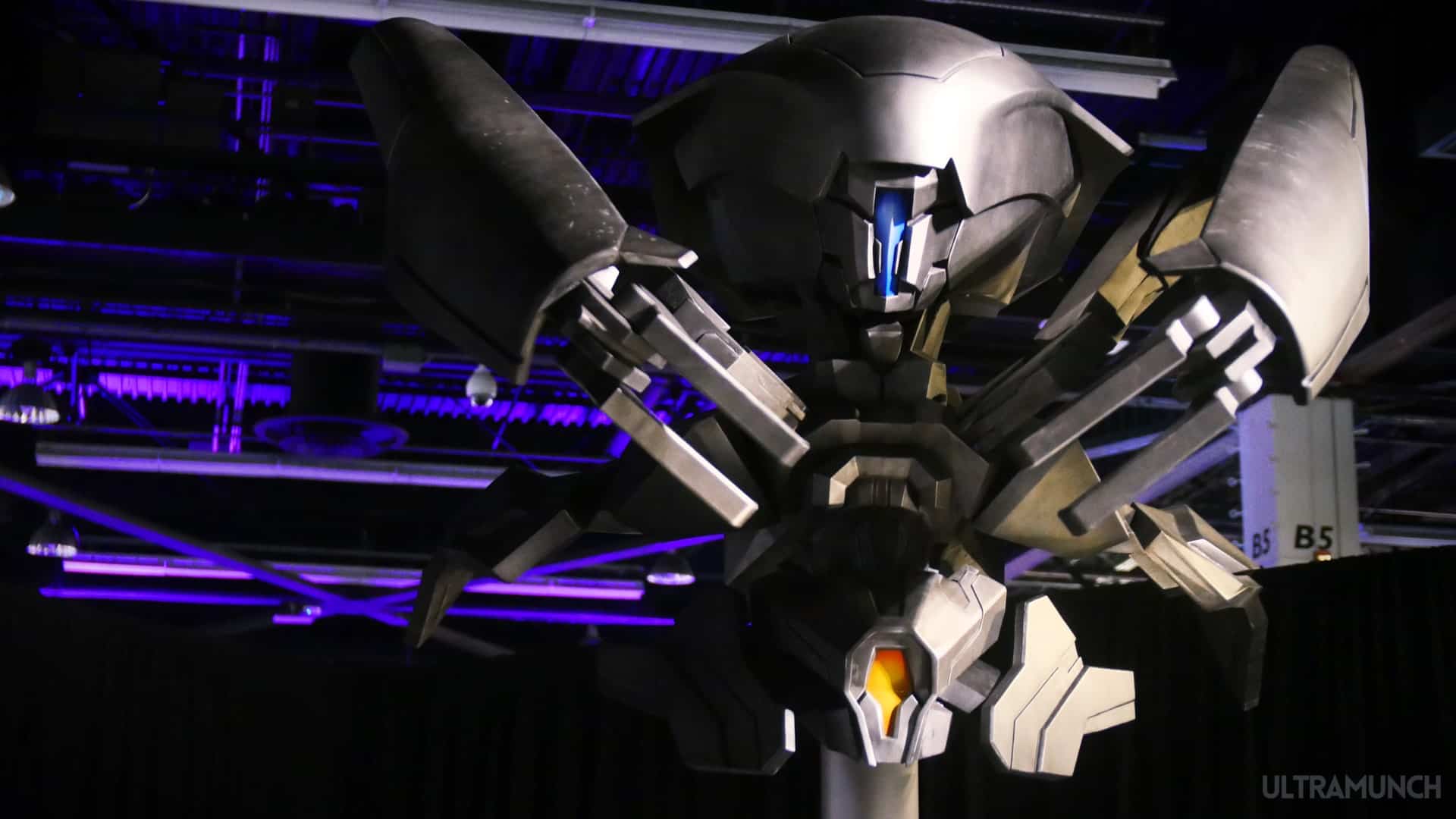 The narration gives some pretty extensive background information on the the lore. Each “room” has 1 – 3 statues inside as the pre-recorded audio guide explains each thing. 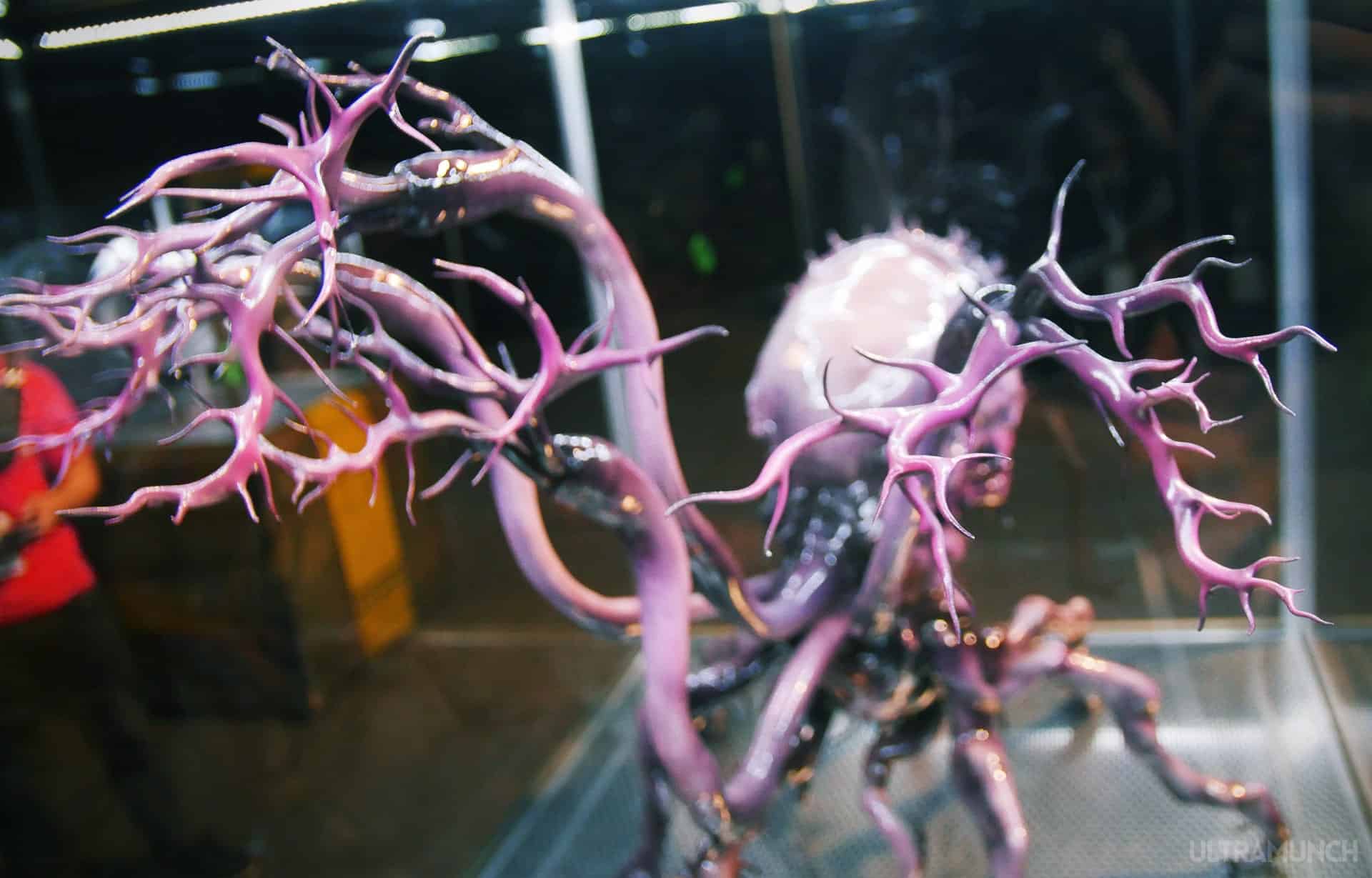 A full sized flood spore, a single one could destroy an entire galaxy! 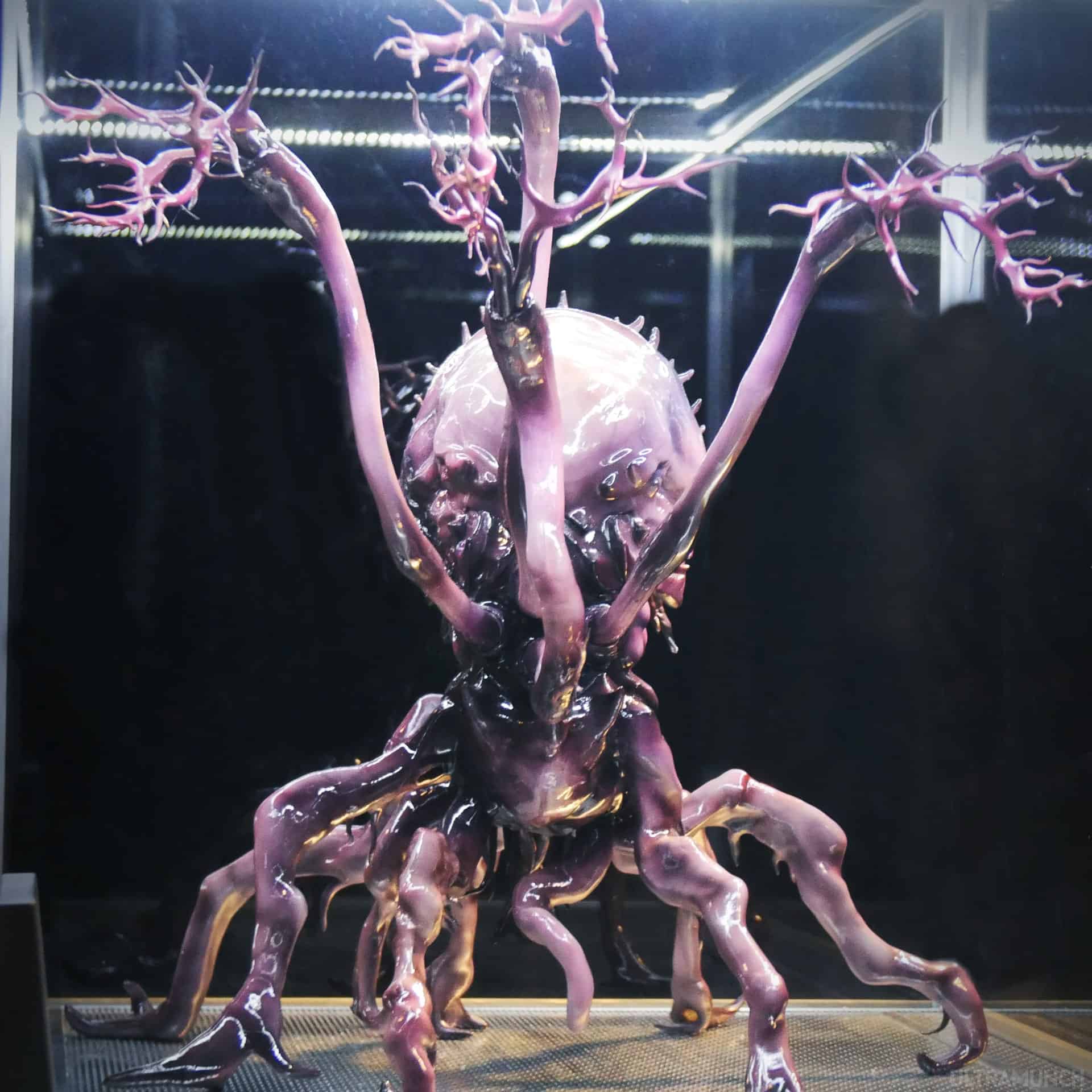 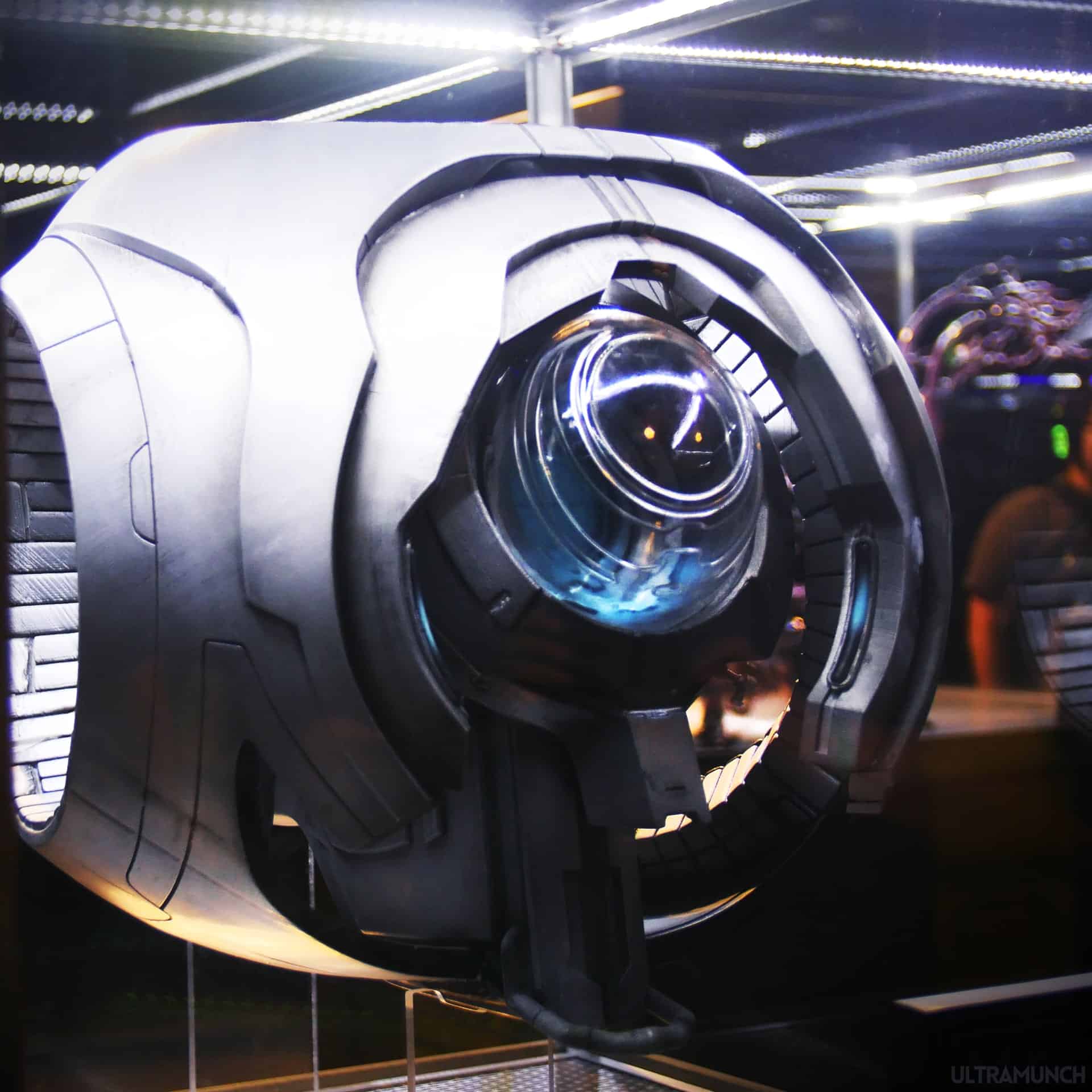 These displays are pretty similar to what you can find outside in the main show floor, however the guided audio and narration really helps give perspective and more excitement to the items. 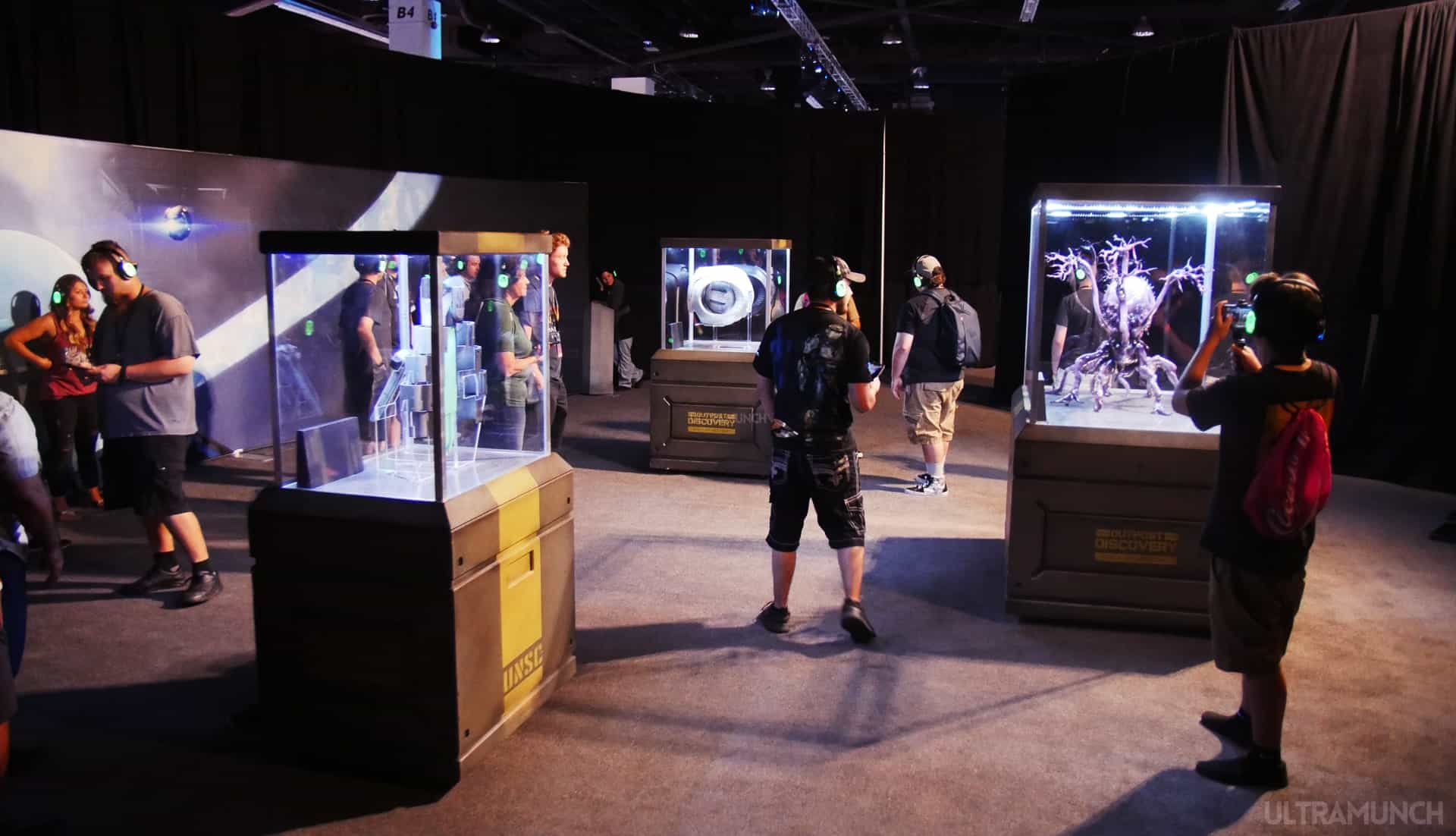 The fourth and final room in The Ring attraction is one that we were not allowed to film or take pictures at.

It is basically a 360 video experience of the “Honeybee” drone flying through the Halo ring, inside, outside, all around, giving a really great visual and auditory experience to finish off the tour.

By far this was the absolute best attraction if you are interested in the lore and also if you want to experience something more relaxing.

Hidden away in the back corner of the event was a Nerf Battle Arena. There was basically no line for this.

It is basically a thing designed for kids, but we got lucky to be in with a group of older people. It’s “Free for all” but I noticed that people in close proximity to each other tended to work together, it was basically Left Side vs. Right Side.

There’s no “losing” here, just pick up some darts from the floor and start shooting.

While it might sound a bit “lame”, just shooting at random Halo fans and doing Matrix-like bullet dodges was actually pretty fun! Since most of the event had at least 15 – 45 minute wait, this one was nice since 15 – 30 people could be in there at a time and there wasn’t a line anyways.

Basically shooting at a TV screen with a nerf gun. Not much to see there, though some people complained that the screen wasn’t very sensitive and a bulls eye might not be counted properly.

I wish we had done this attraction. Unlike the Pelican, the Covenant Escape is more like a traditional escape room with physical objects and puzzles to solve within the allotted time limit.

From what I heard, this was a cool attraction as well. 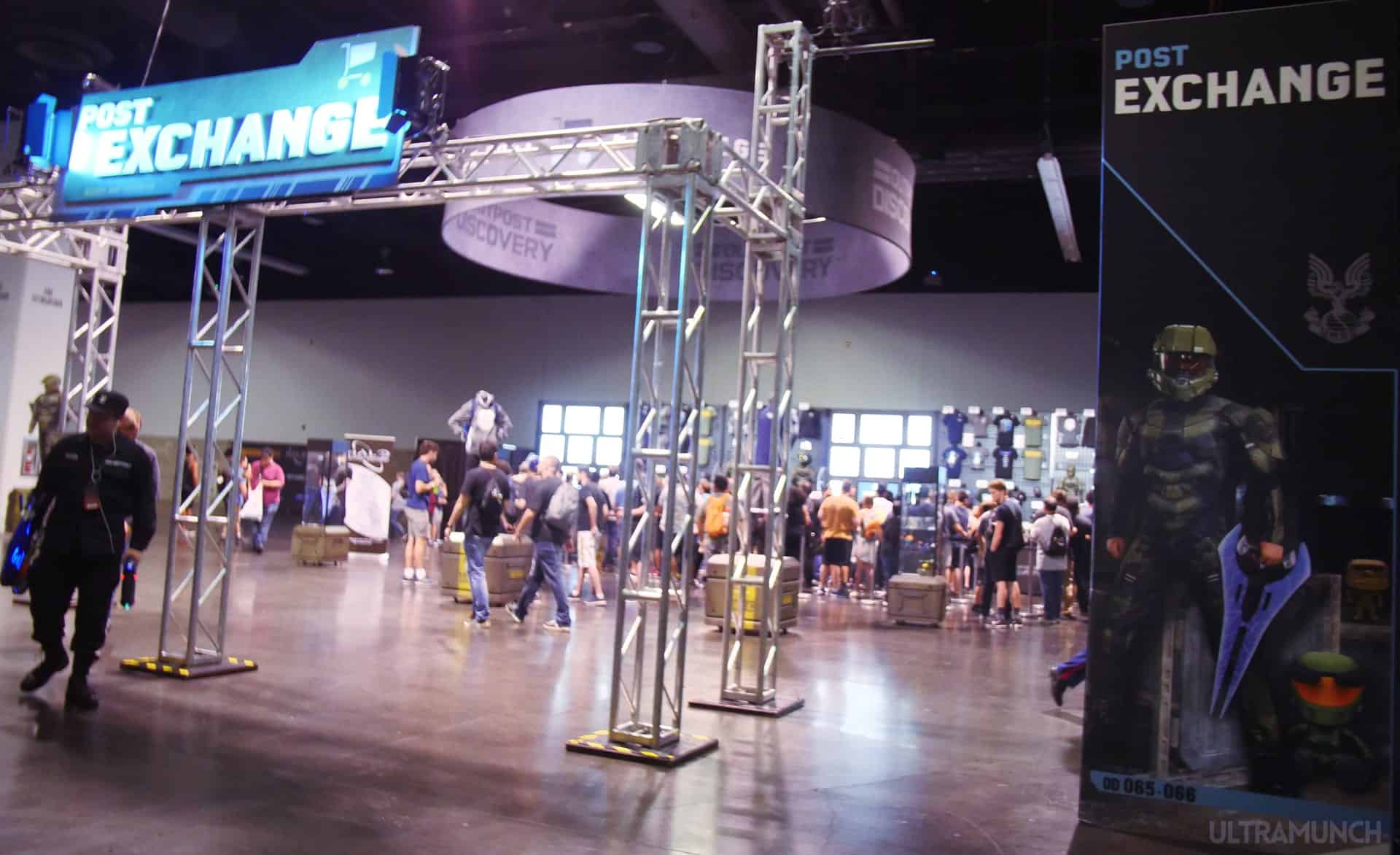 You gotta pick up some exclusive gift here at the event! No reason to be a cheap-o. 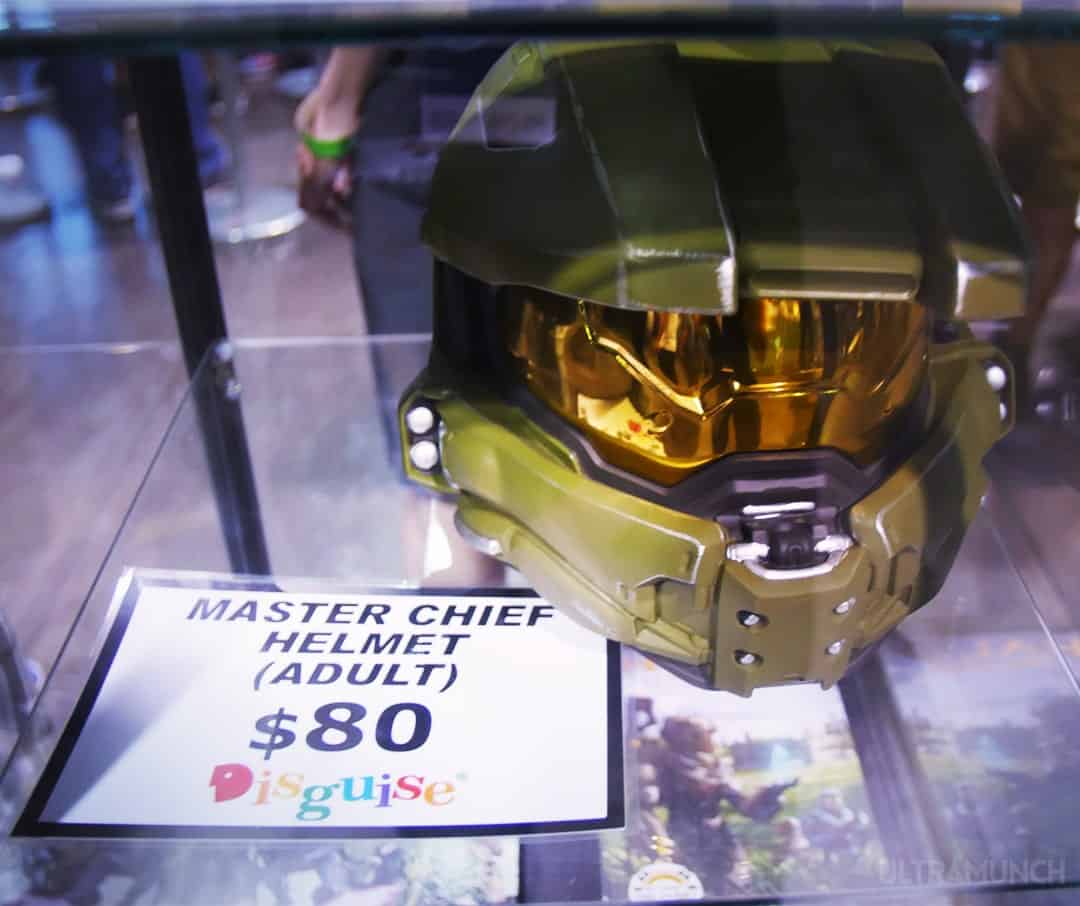 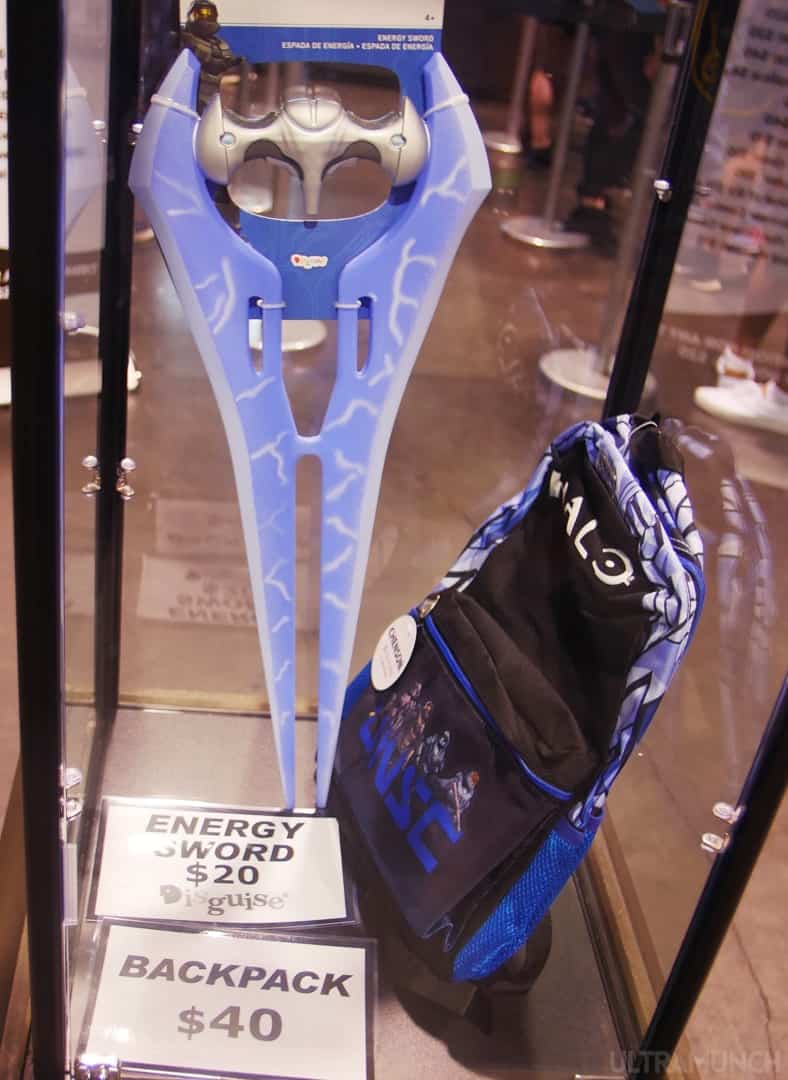 Every other person I saw at the event was carrying around a half sized Energy Sword! I had to get one too. Unfortunately they don’t light up. 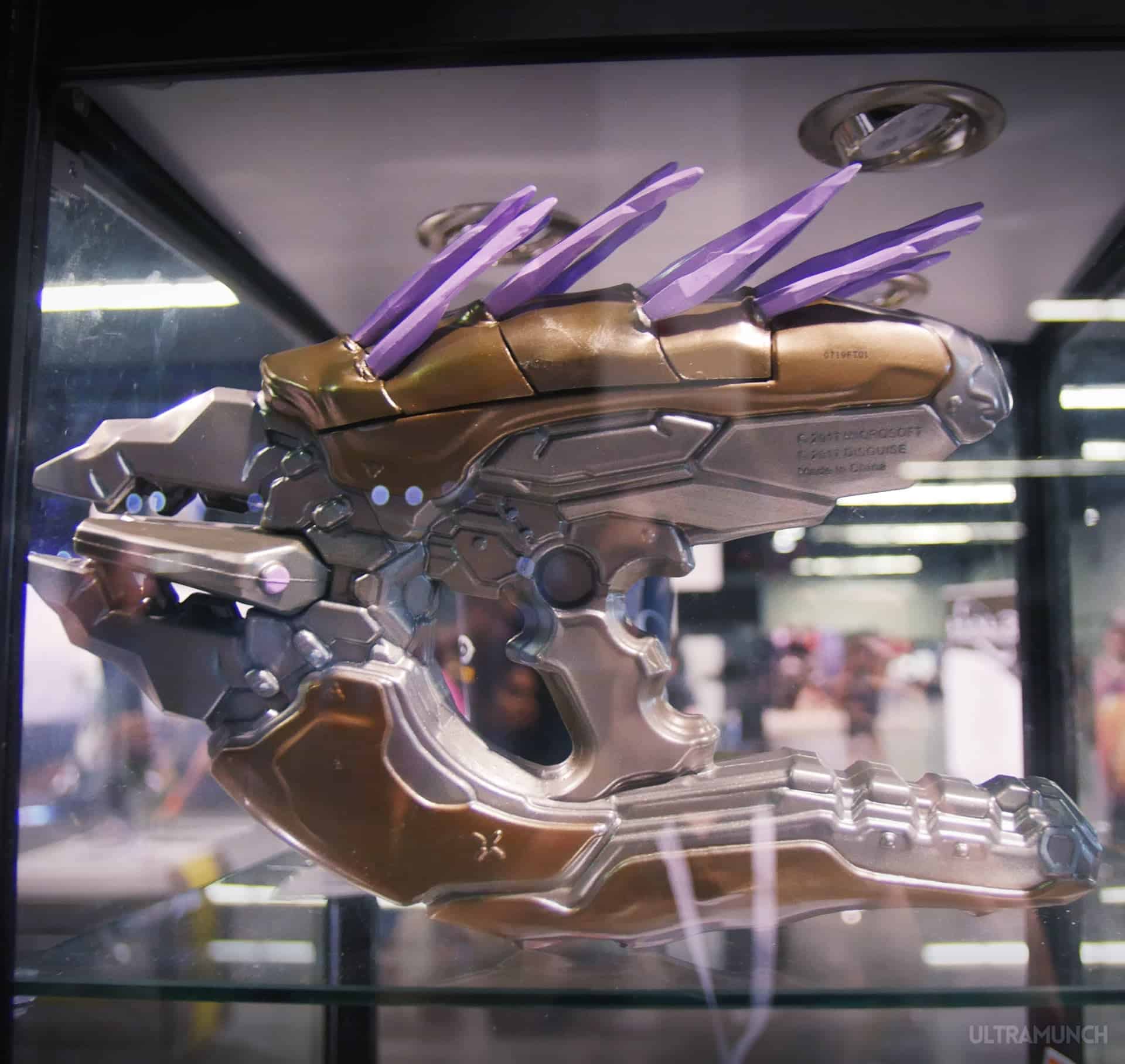 Another cool item was the Needler ($20), this was clearly made for kids because I can not get all my fingers around the handle. Contrary to the “full sized” Needler that they had on display which looks like it would require two hands to carry.

For some reason the color of the Needler (and the Plasma Rifle) were Brown / Orange instead of the purple colors they should be in the game. 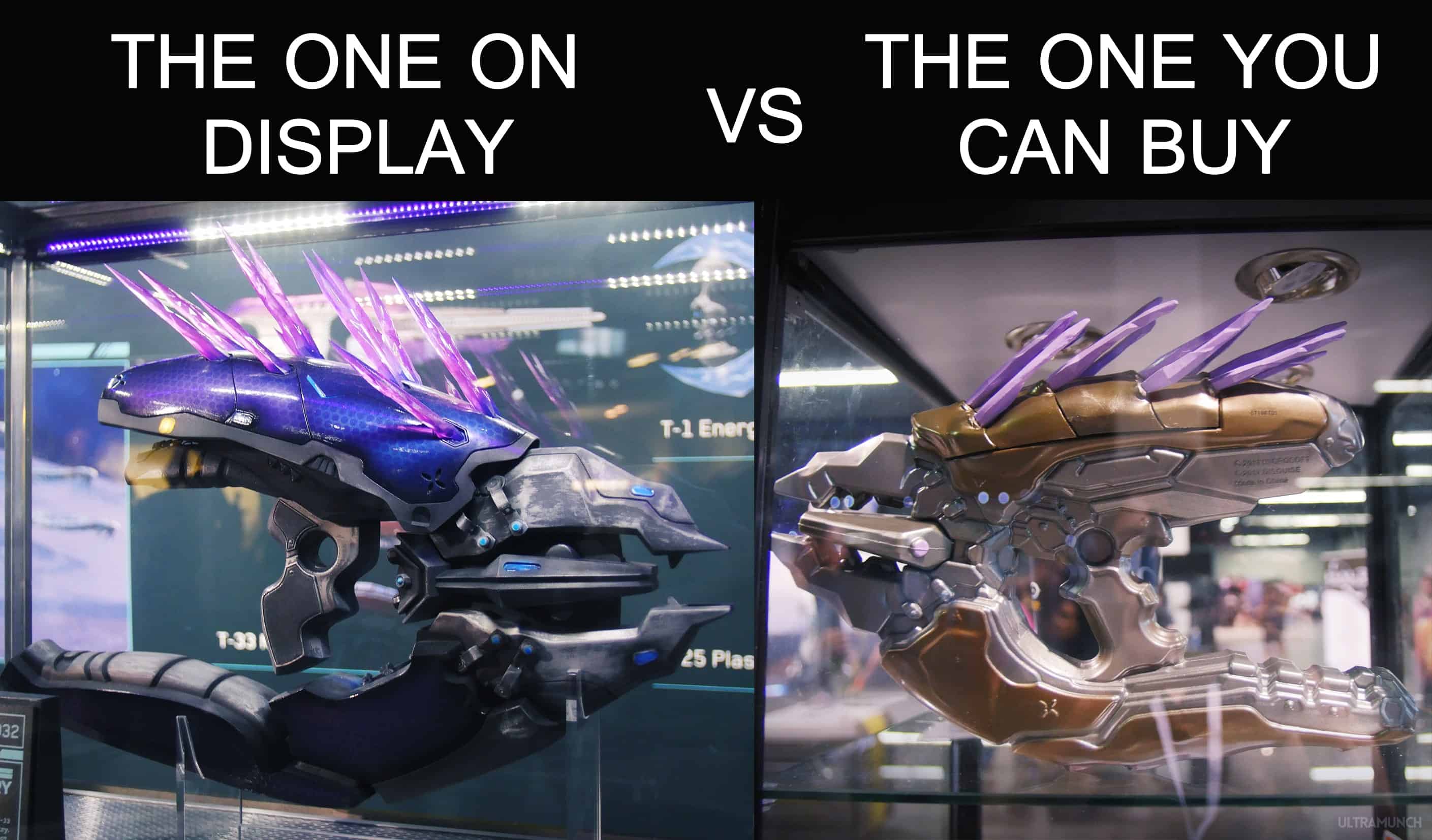 Of course, they have to produce these toys at a reasonable cost since they sell them for only $20. So this is expected, but I don’t know why they couldn’t at least get the colors right?

If you’re looking for a really awesome Needler, you can check some hand built ones on Etsy or buy some better replicas off eBay! 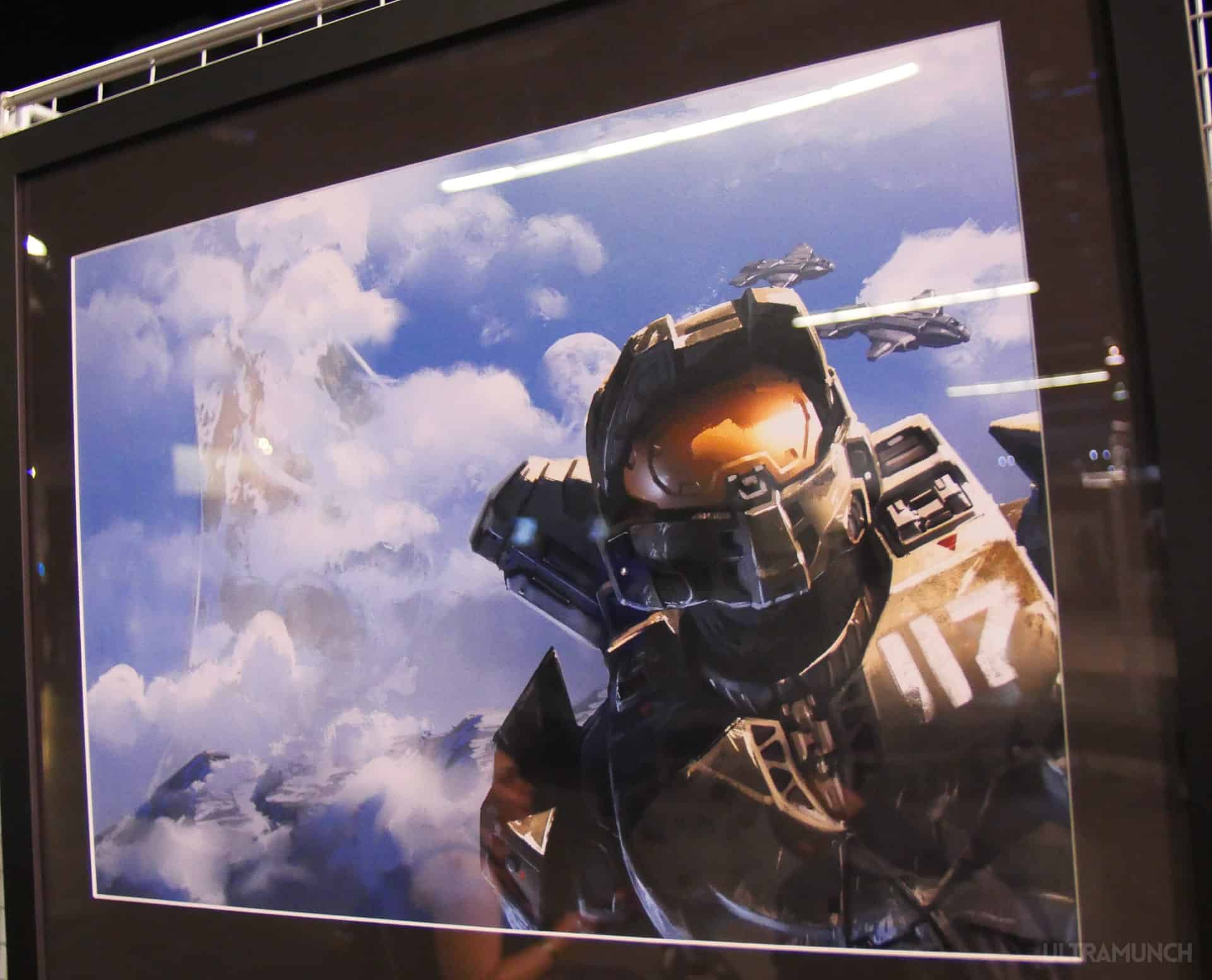 The Halo fan base is very awesome. You can see some fan art on display, including some cool items made using “Mega Construx” which are basically legos.

There was a section in the corner of about 7 booths from various vendors and promotions including: AT&T, The Marines, some Cosplayers and local businesses. 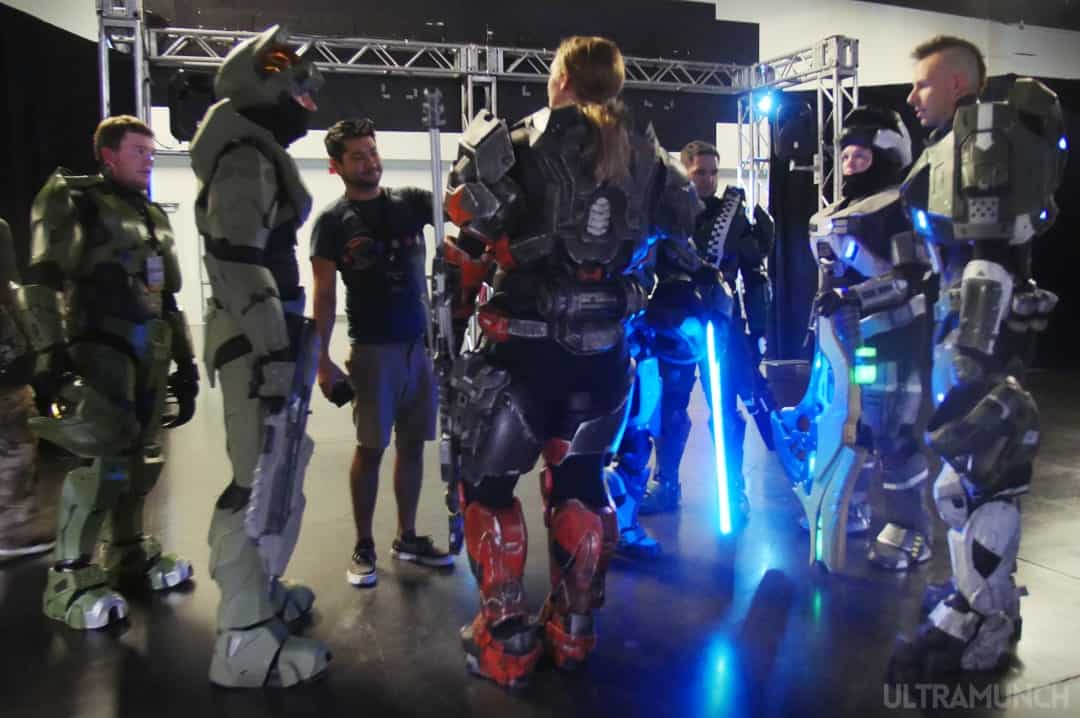 Halo Cosplayers are always the most detailed and interesting from the suits to the weapons. And their energy swords actually lit up!

As expected for Day 1 (Friday), the event was very chill, not crowded at all. We almost thought we went to the wrong place because the line to get in was so small.

Even though the lines took 30 – 45 minutes at a minimum, it wasn’t because the event was super crowded, but rather because each attraction was intimate and only allowed a few people at a time (besides the Nerf Battle and The Ring).

This was actually a very nice experience. We kept colliding with the same strangers we met from the Pelican event and the whole experience was quite “chill” and very intimate. 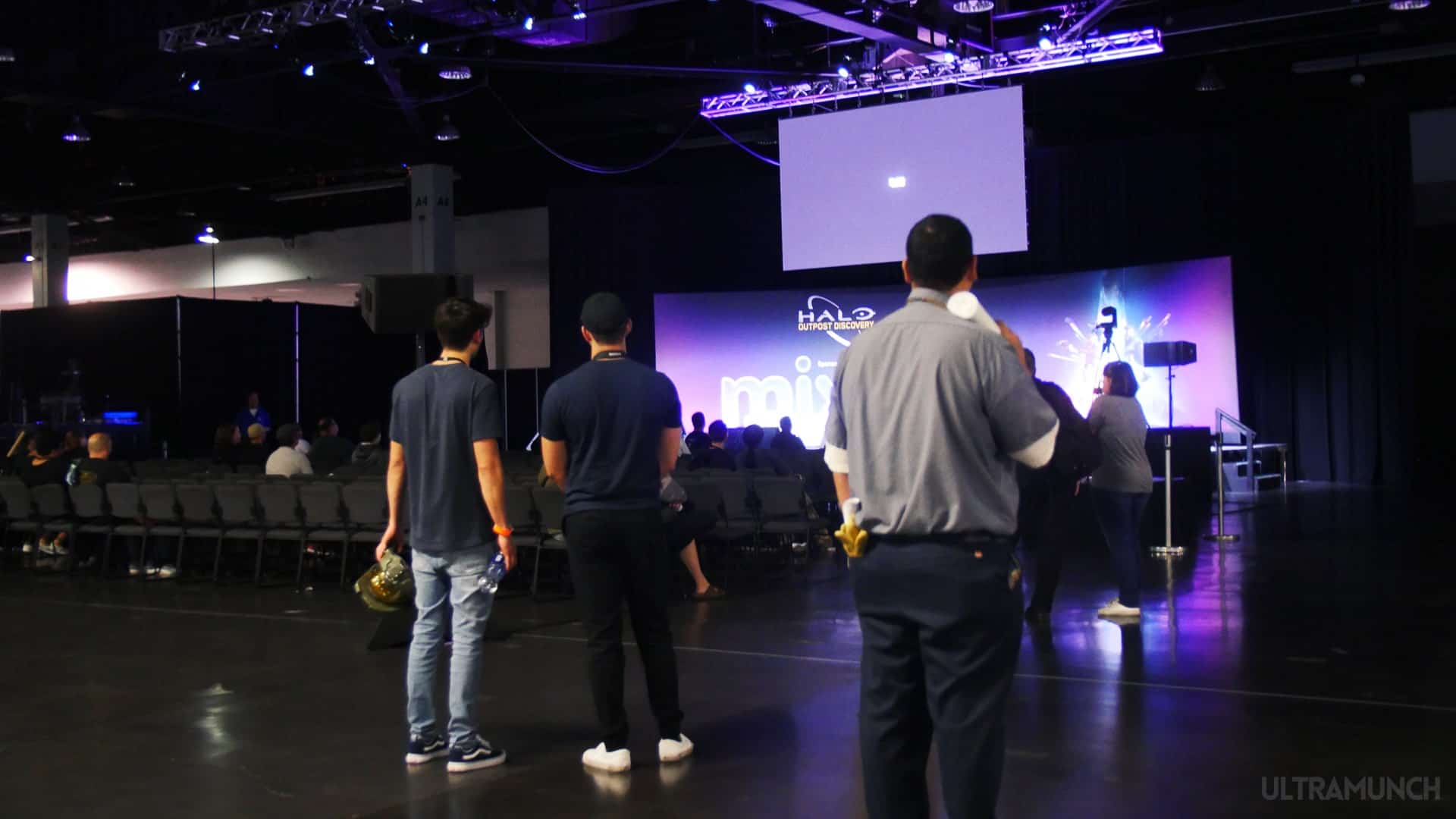 One of the most memorable moments of the event was actually not scripted or scheduled at all; they played the Halo Infinite trailer on the big screen, and everyone in the vicinity (including a random janitor) stopped and watched the trailer together. It was a beautiful moment that reminded us why we were all here in the first place!

Because we love Halo and also if Halo Infinite had launched we wouldn’t have time for this event!

The VIP Lounge (some minor complaints) 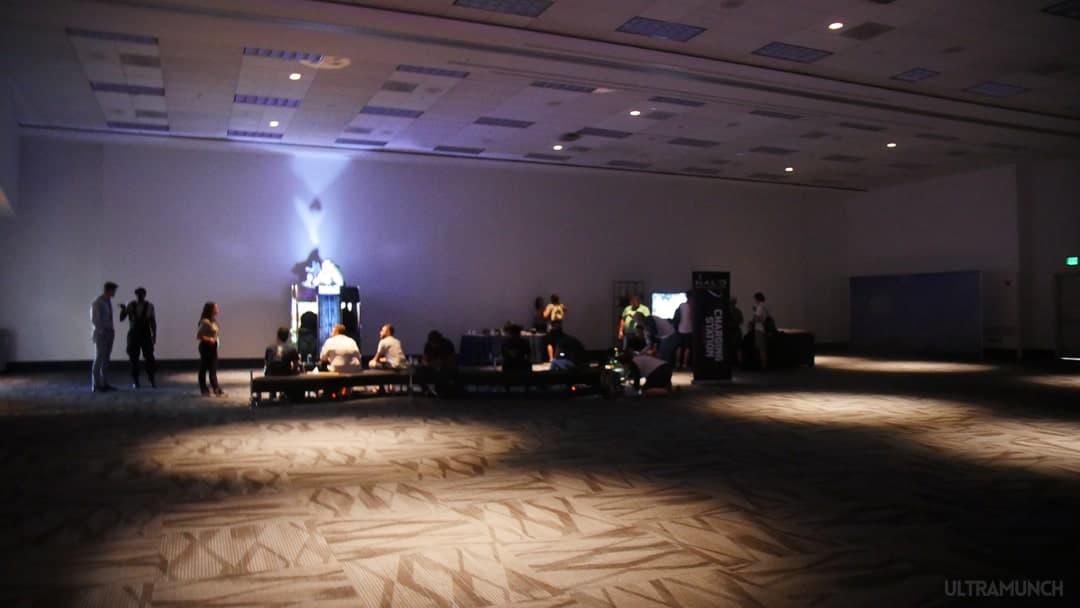 This was a special area for “VIP” badge holders (basically anyone who pays the higher price) and Press and Media people are allowed inside.

Unfortunately it’s just a dark room that isn’t fully exclusive since the “VIP” badge holders can get inside as well. You get to enjoy free sodas and pretzels at least!

I am not complaining about this, but most large conventions offer a private area for Press and Media people to hook up a laptop, get some work done, or network with each other as well as a safe place to store camera equipment and other items. 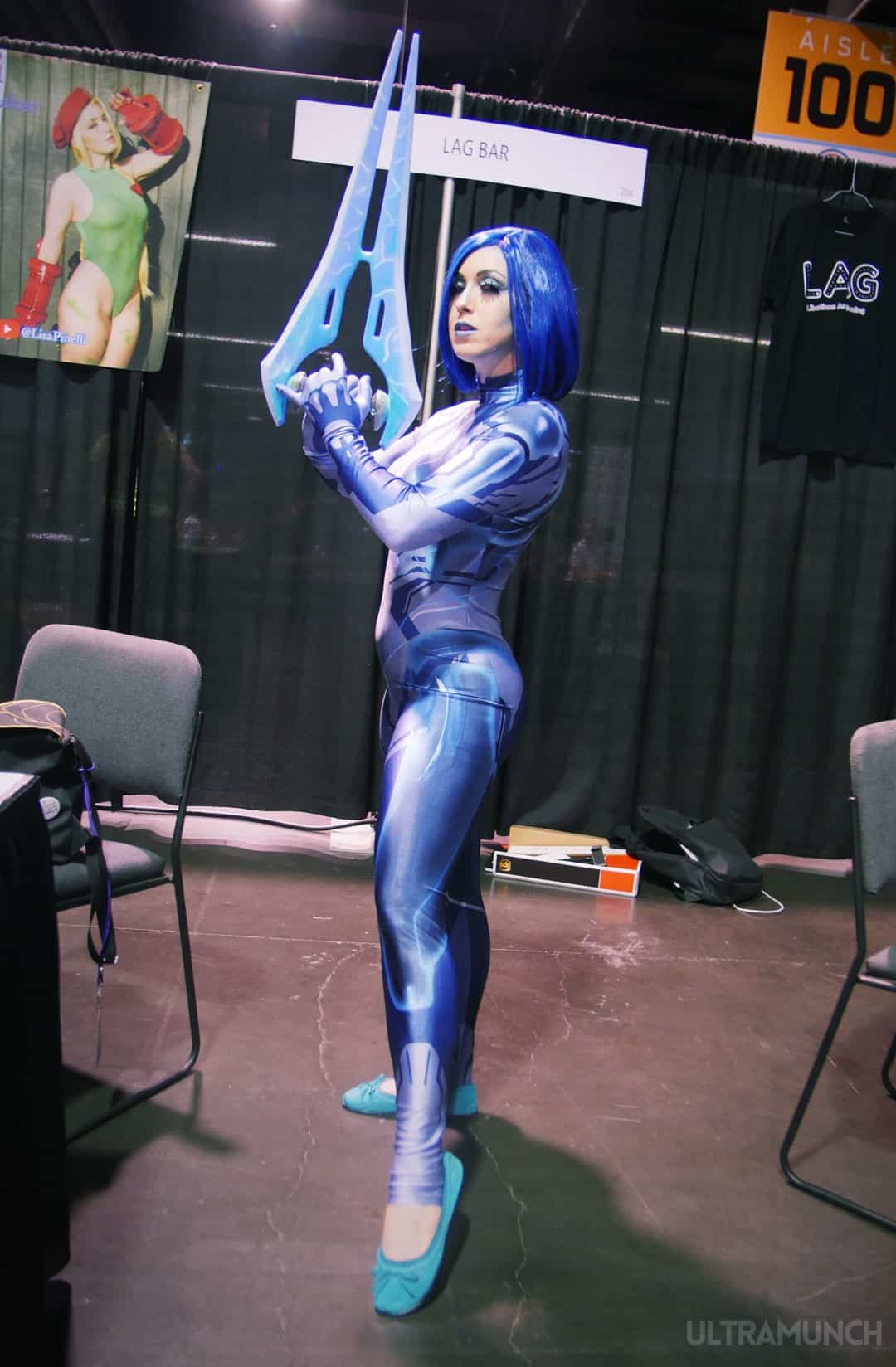 I realize this was a smaller event, and such amenities probably should not be expected, but I felt this was worth mentioning, since me and my team we hoping for a quiet work space to transfer some of our footage and do some live event coverage (which obviously didn’t happen).

On a positive note, the Anaheim Convention Center staff are very polite and professional, unlike some other convention centers in California…

The event was not very large so it wasn’t that big of a deal, but they should have had a “priory” entrance somewhere so press and media people can get in early and take pictures before the crowd appeared.

Halo Outpost was really something special. If you missed out on it, you were definitely missing some great experiences and fun times. It was so small and intimate that it was very approachable to meet up with fans, famous cosplayers, and even the voice actors for the game! 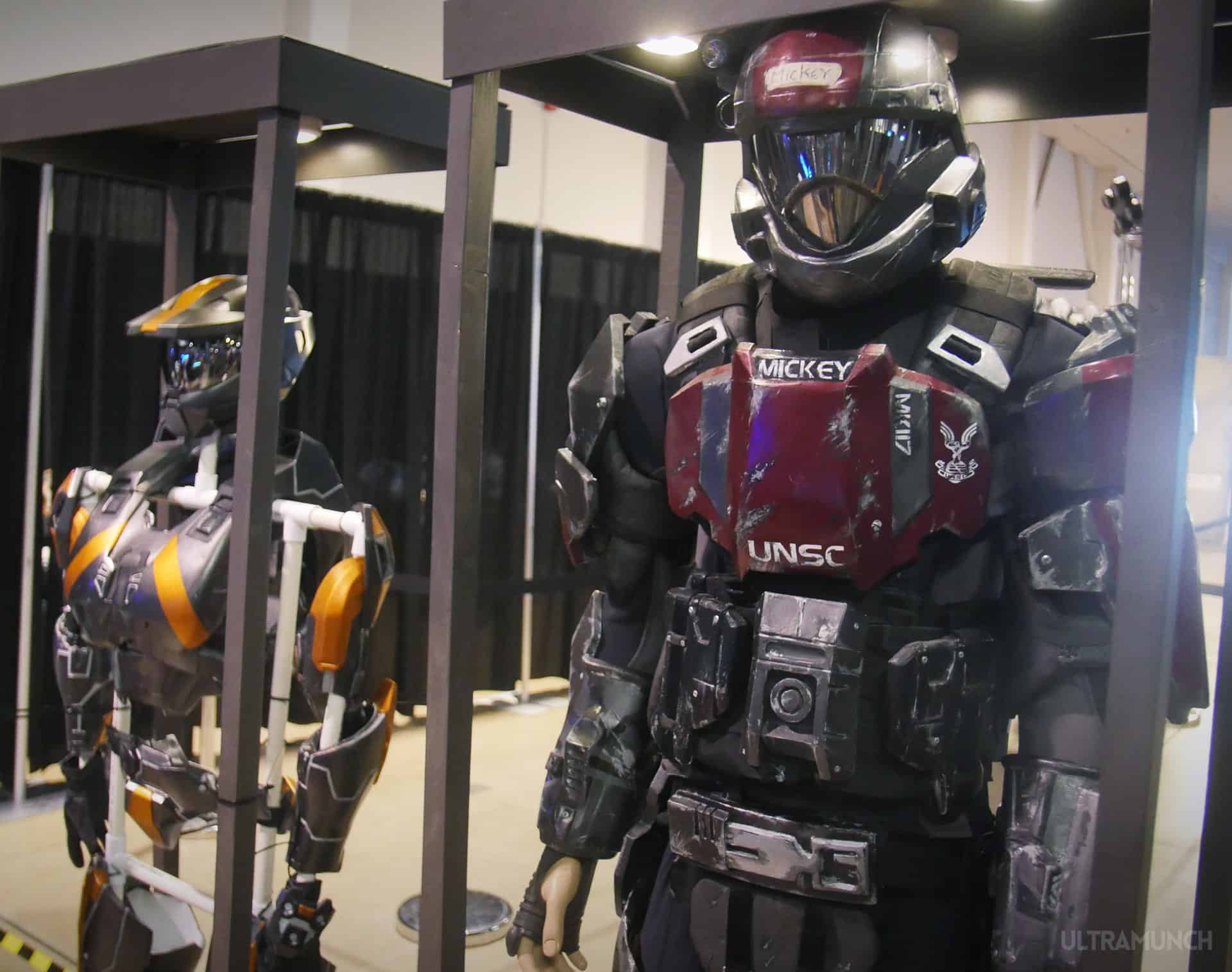 Some things could have been executed a bit better, such as better advertising for what you are standing in line for (there are virtually no signs or information about the events, we would have totally skipped The Ring if it weren’t for us taking a leap of faith) and the event Schedule was printed on a tiny piece of paper with no pictures or anything; as well as our note on the VIP Lounge.

Regardless, the event overall was really special and I hope Halo will put on another event again in the future!

Advertise with us
263
likes / shares
FacebookTwitter