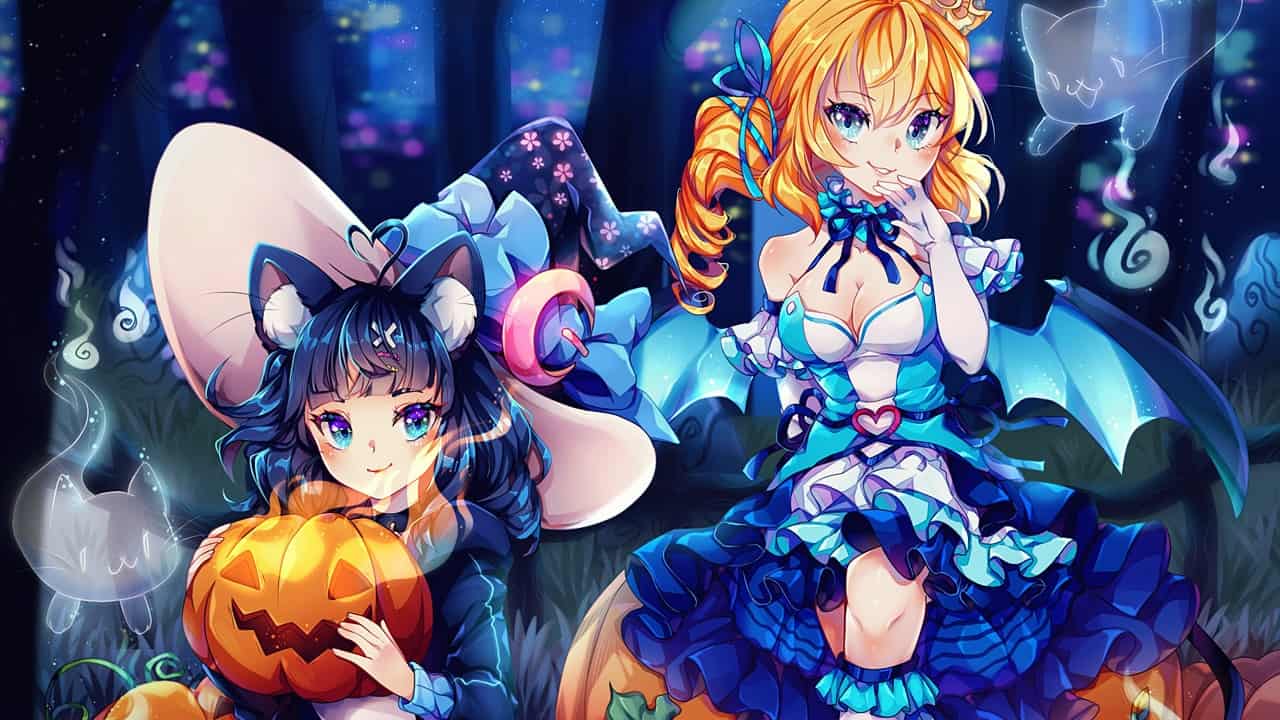 Masashi Kishimoto Takes Over as Writer for “Boruto” Manga

Hello everyone and thank you for waiting for us to finally announce the winner of this Halloween 2020 Art Contest!

2020 has been a crazy year and everyone’s schedules were packed, however I am so grateful to the three guest judges who took time out of their busy schedules to drop some feedback on the entries and ultimately help shape the outcome of this contest.

How are the Winner(s) Selected?

Of course artistic skills and visual representation are important when deciding the winners, however other factors were also considered, such as how well the “Halloween theme” was presented, as well as any creative twists that the artist put on the official mascot designs.

We tried our best to have an honest and impartial judging system that wasn’t solely based on artistic skill alone.

Everyone who entered this contest should feel a sense of pride that your art was viewed and considered by some very talented guest judges and hopefully cherish the feedback received!

These are pieces which were selected by the judges and will be featured as honorable mentions / special entries! 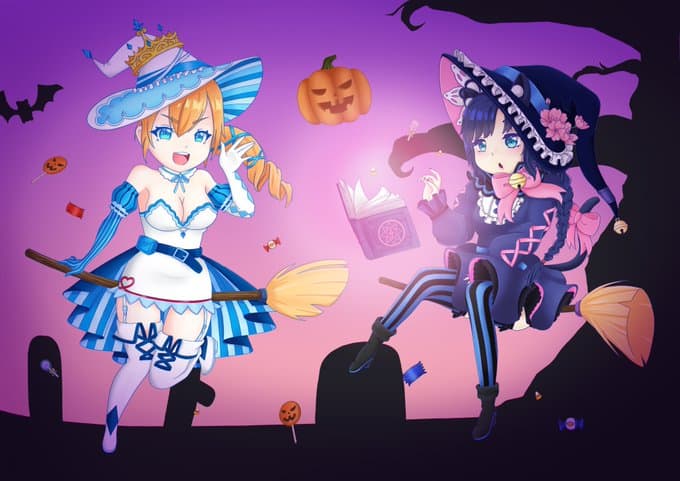 Even with a simple shading style, I love the way this drawing looks! I like the designs of their outfits, well designed! Especially the crown on the hat~ * w * – 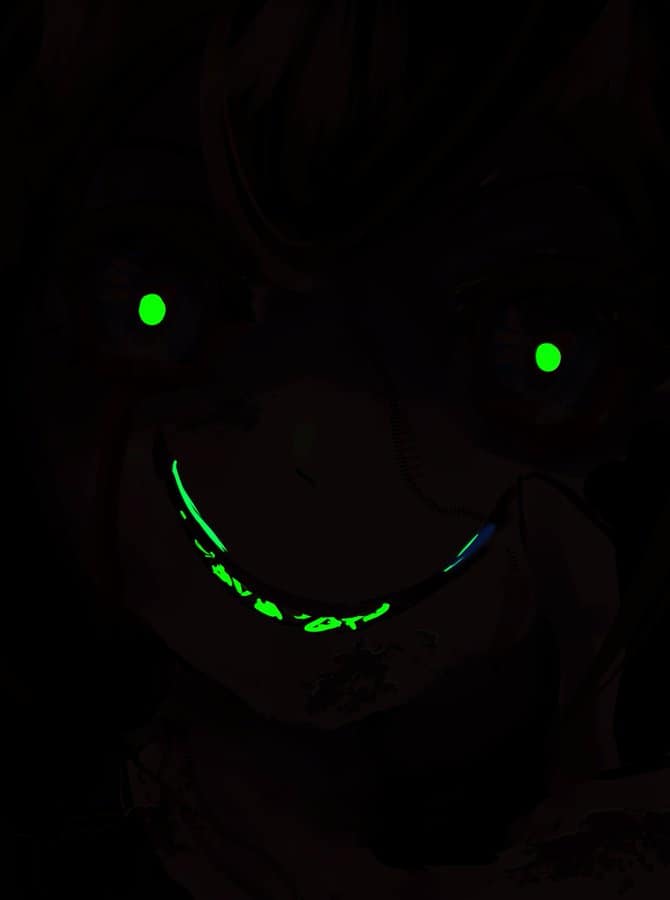 You might be asking, what’s so special about this one? However, there is a hidden image within this file.

Once the brightness is adjusted, the true image appears! 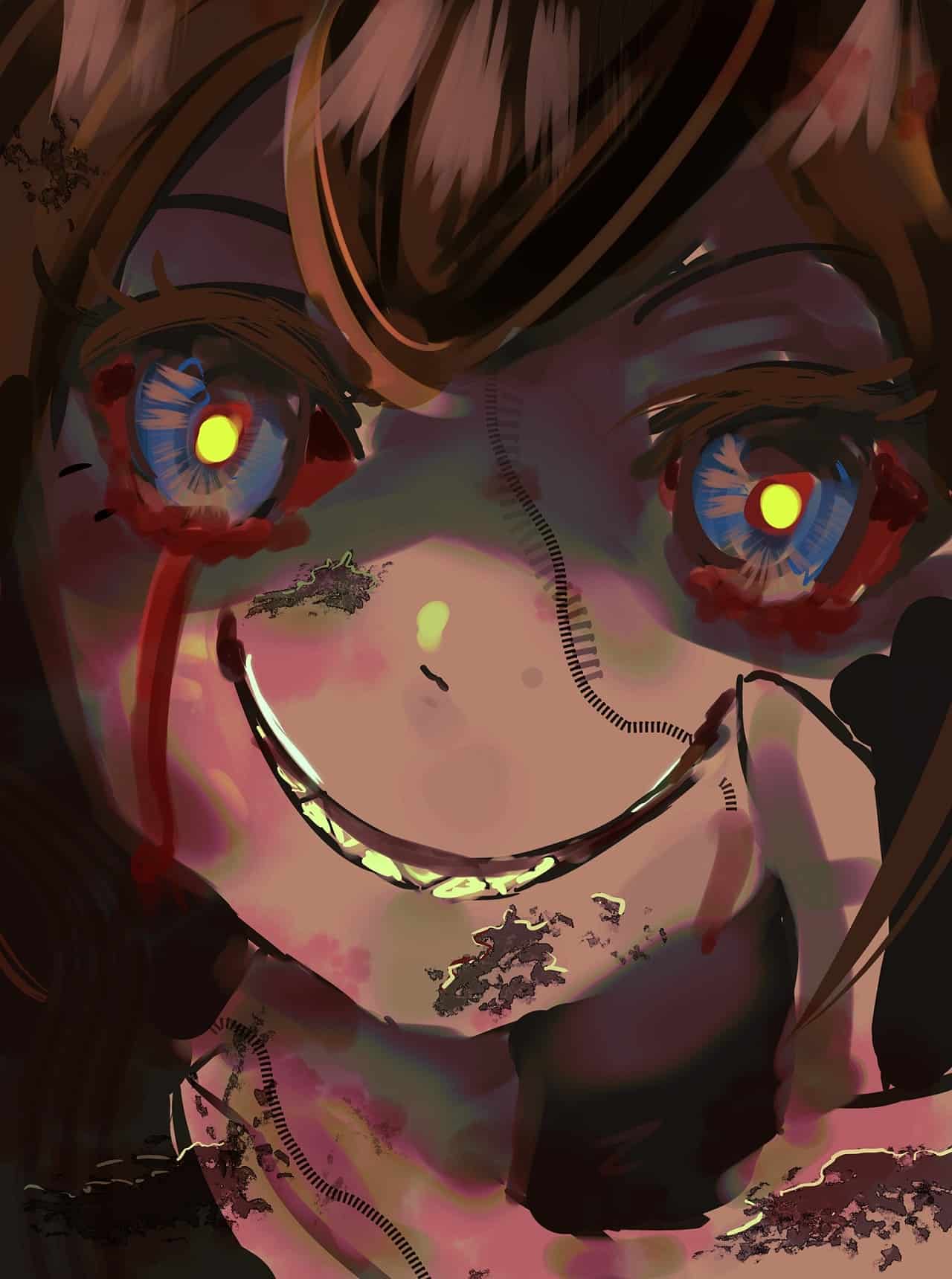 This is sooo cool and creative, I kinda can imagine how it is made, but omg, not sure if it was planned since the beginning?

Very clever! I wanted to see the drawing without zoom, but I guess it wasn’t posted (yet?). Points for the interesting idea, but I can’t judge the illustration itself 😉  –

The top 5 pieces were selected by the guest judges in a specific order of 1 – 5. The position is determined based on the judges decisions and whichever received the highest ranking from all 3 judges. 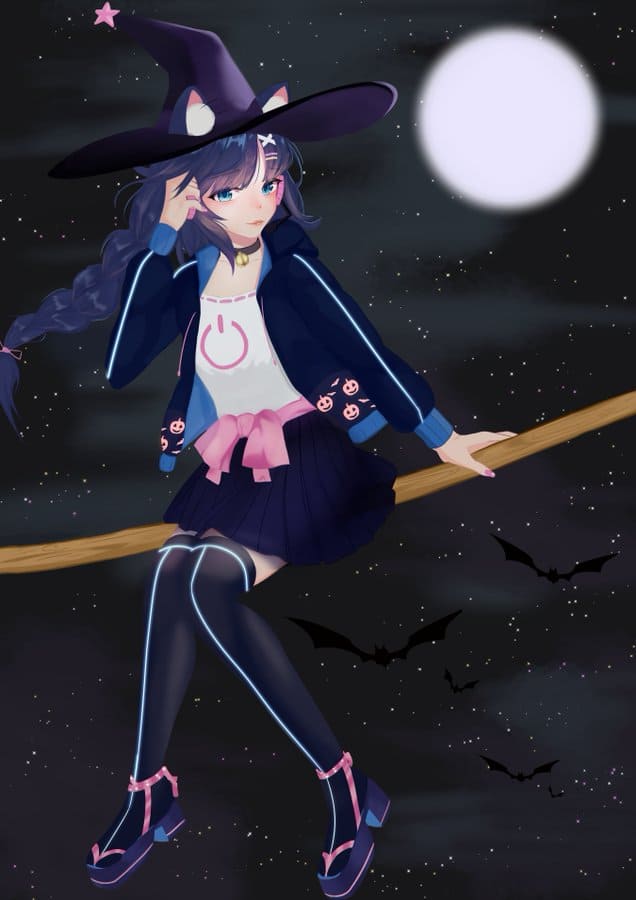 This drawing is also very cute! I love how the flowers on her jacket were replaced with pumpkins and bats to match the holiday ~ She is such a lovely witch kitty~ –

You have a great sense of anatomy and perspective. It’s a pity that you might not have enough time to refine this work.

I would expect more design on her outfit and background to make it more interesting. –

The witch is the cat, a recurring concept on this event, I guess now this should be canon!

Oh oh I love the pumpkins on her hoodie, and the little star on the tip of the hat. The background could be more filled with colors (yes, even dark sky can have colors in anime), but the face of the mascot and her hand on the headphones is what drags my attention, she is super pretty here! – 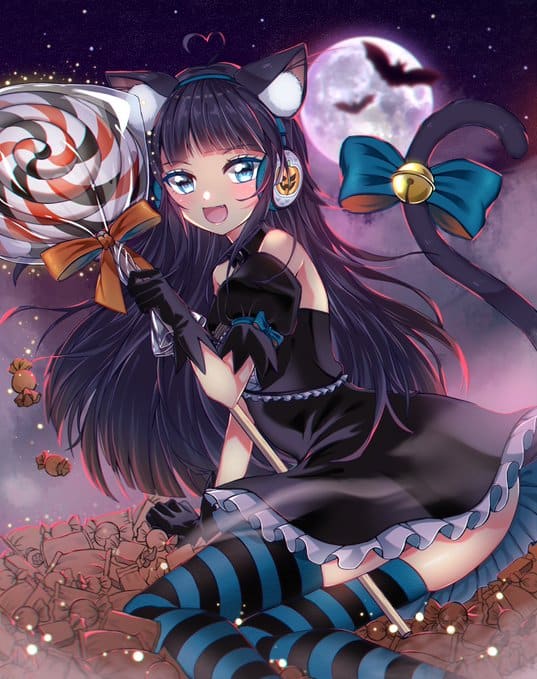 This drawing is just so cute! I love her outfit and the giant candy!
And all these sweets around~ She is lucky 😀 –

This cat is giving or taking all the candies?? Looks like she became the queen here!

Some color change happened on the character clothes, but I believe it’s for the Halloween theme? Still, I enjoy the pumpkin on her headset, as well the biiiig lolipop.

The pose is so risqué that makes me blush (inside), and the night sky with fog was made in a nice manner (that moon looks detailed!), besides the many many candies she is sitting on… Oh if I could be one of them, I mean, if I could eat that many hahaha… *Cough* I can see the amount of work put there too, so good job really! –

Pretty nice work. I love her Halloween costume and the big tasty lollipop. What a cute Halloween black cat girl.

I can see you worked pretty hard to draw the candies in the background and you did well to keep the volume of her legs. Nicely done. I am thinking this work might be more interesting if the candies are colorful instead of only chocolates. – 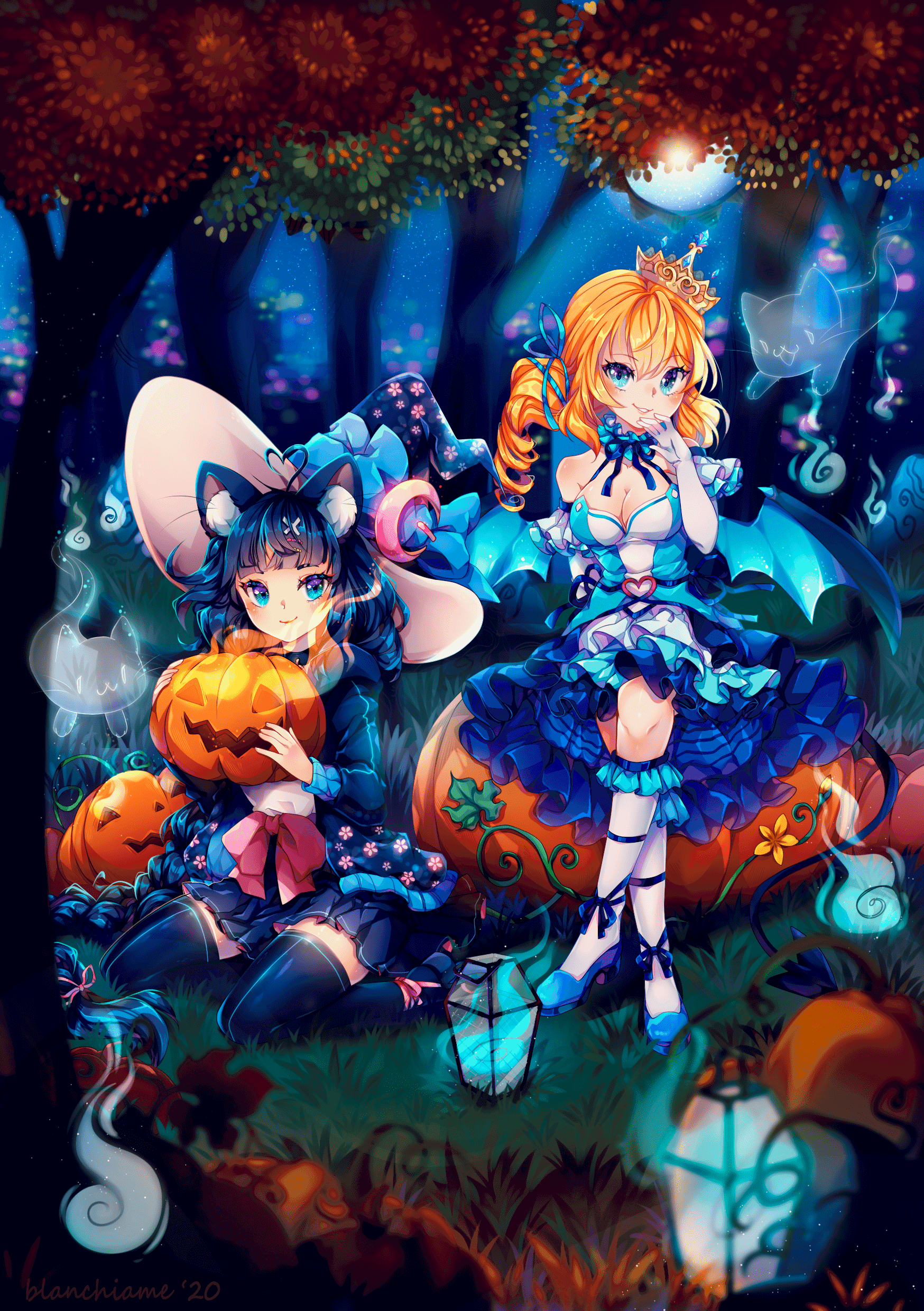 This drawing is wonderful! At first glance I see a full illustration with a very good color scheme.

Then the more I look at it, more details I find: the blue lanterns and ghost (cat ghosts!!), that the trees are a bit green still and the rose bushes on the background.

Not to speak about the characters, you can feel their personalities on the posing, which is simple but effective, and extra plus for adding a bit of Halloween costume to their clothes! I love that very very much! –

You are pretty good at drawing cute characters and this is absolutely a nice work. The balanced composition and color contrast leads to the great atmosphere of pumpkin forest.

One thing I would say is that you could be more confident to design the Halloween costume for both of the characters. I would be happy to see more of your creativity. –

Note: Some people have asked why someone who is also a judge of the contest entering, is that unfair?

Ame wanted to enter this contest, and I wouldn’t deny anyone from entering our contests! However, as a judge, this would be under the condition that the entry is not eligible to win the first prize, which I think is fair.

This was such as unique entry, was not expecting to see something like this!

I immediately liked this animation as soon as I saw it. I would like a game like this. It reminds me of those cool old school games. Well done! –

There is a candy collecting game version that you can play here.

I am really surprised to see pixel art here and I really love the cute characters in the old game art style. You just bring me back to my childhood. Here’s your candy! –

This small pixel art game is adorable, the artwork there is the main highlight, it is quite detailed, and I like the sky and montains a lot.

Also the concept is adorable, you are one of the mascots collecting candies, couldn’t be more fitting right?

I just wish we could actually jump from one thing to the other and collect more candies in a row, that would’ve been amazing, but I guess complicated to do in a short period of time. Still super cute! – 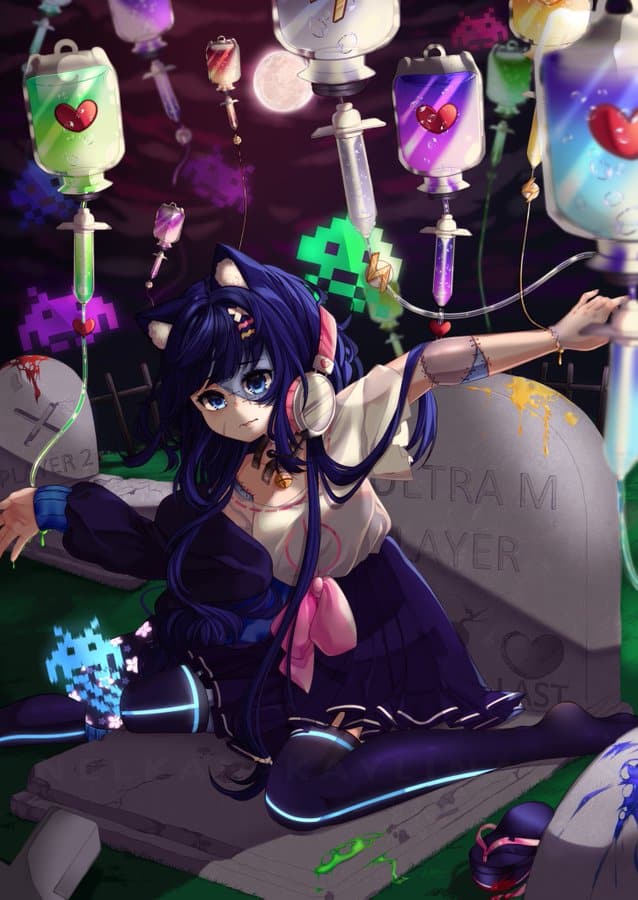 Congratulations on winning the first prize! This piece is so creative and interesting on so many levels.

I love the game theme of this drawing, it suits the character very much! I am a little sad for the character, she looks scared and lost, but she is still very cute, even as the zombie ~ Really nice drawn, and nice color combination, i love it! –

Some feedback from the Judges:

That’s an interesting idea to make her a zombie injecting liquid of love(?).

I also see various game materials on the canvas, just like she is a crazy game lover that craves playing games even though she has become a zombie.

I can feel you must have many stories about this work but that’s a little obscure for the audience to understand.
Maybe you can try to do composition after well organized all the materials you want to introduce next time.-

Super spooky but fun! I love to imagine the character is doing some kind of photoshoot for the event, but she is so into it that she got scared herself.

The broken leg with pixels coming out is my favorite bit, together with the other pixel monsters, I always enjoyed the mix of categories and themes because it makes the whole drawing more interesting to look at.

Talking of which, the gravestones are also a fun detail. The whole drawing seems like it was a challenging but entertaining piece to work with! – 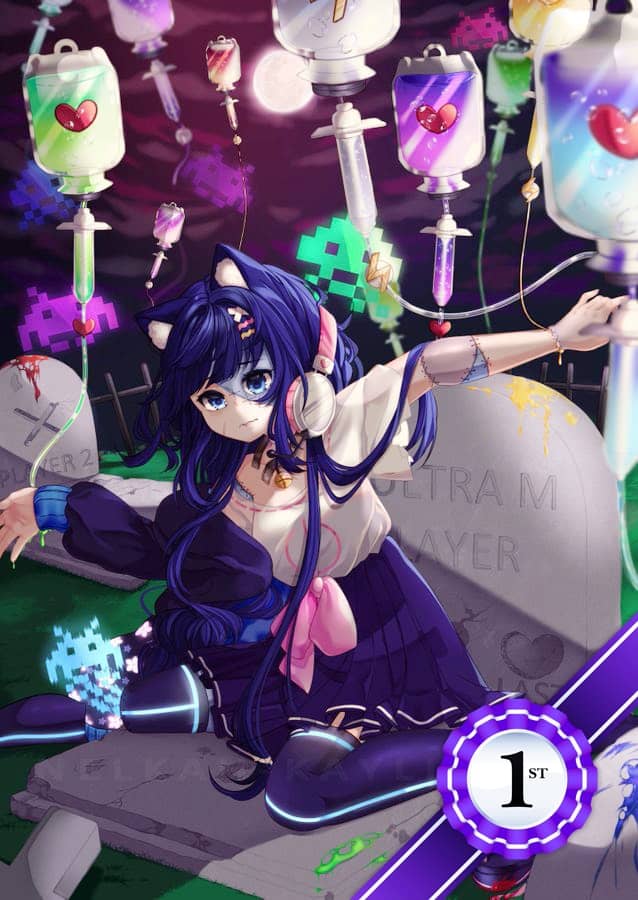 How to claim your prize?

We have reached out to the contest winner already via Twitter.

Because the amount of entries we received this year wasn’t so large, we decided to just show all the other entries here! 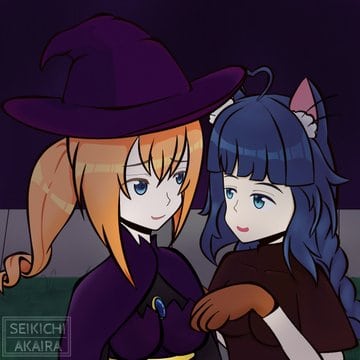 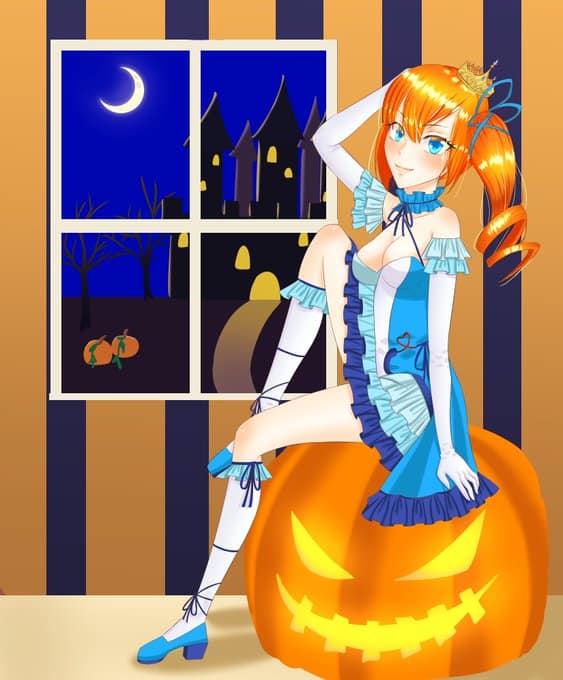 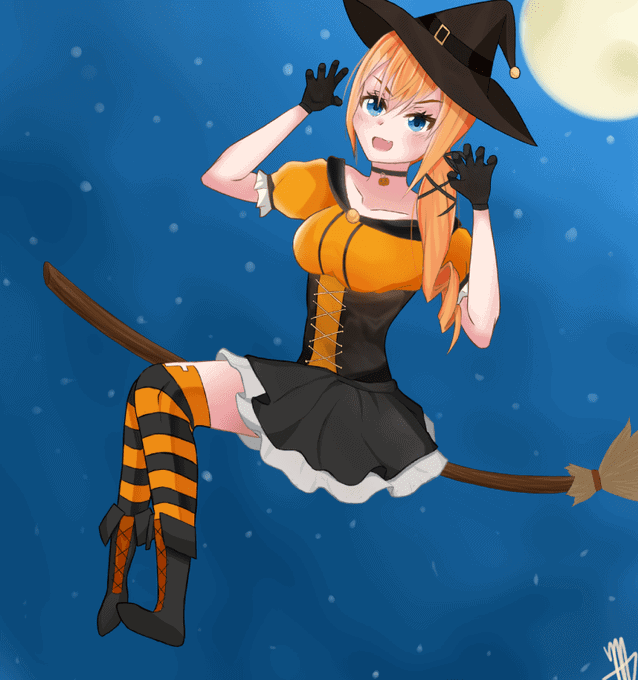 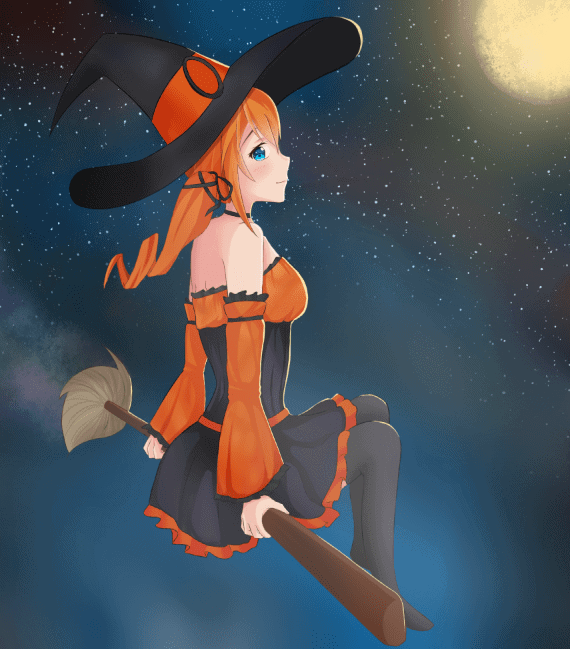 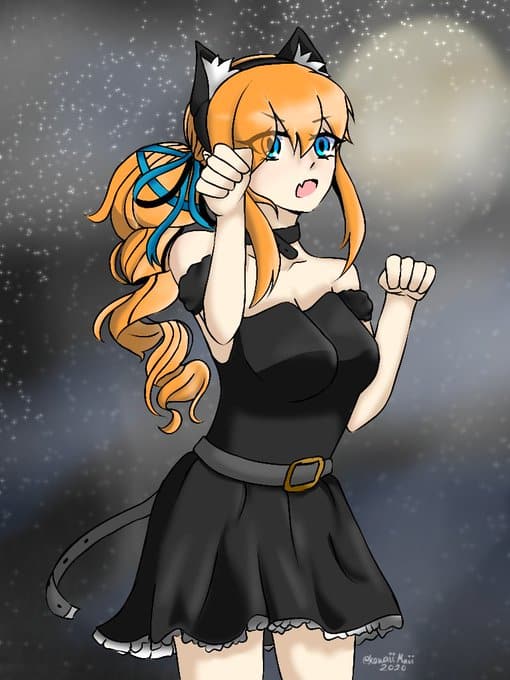 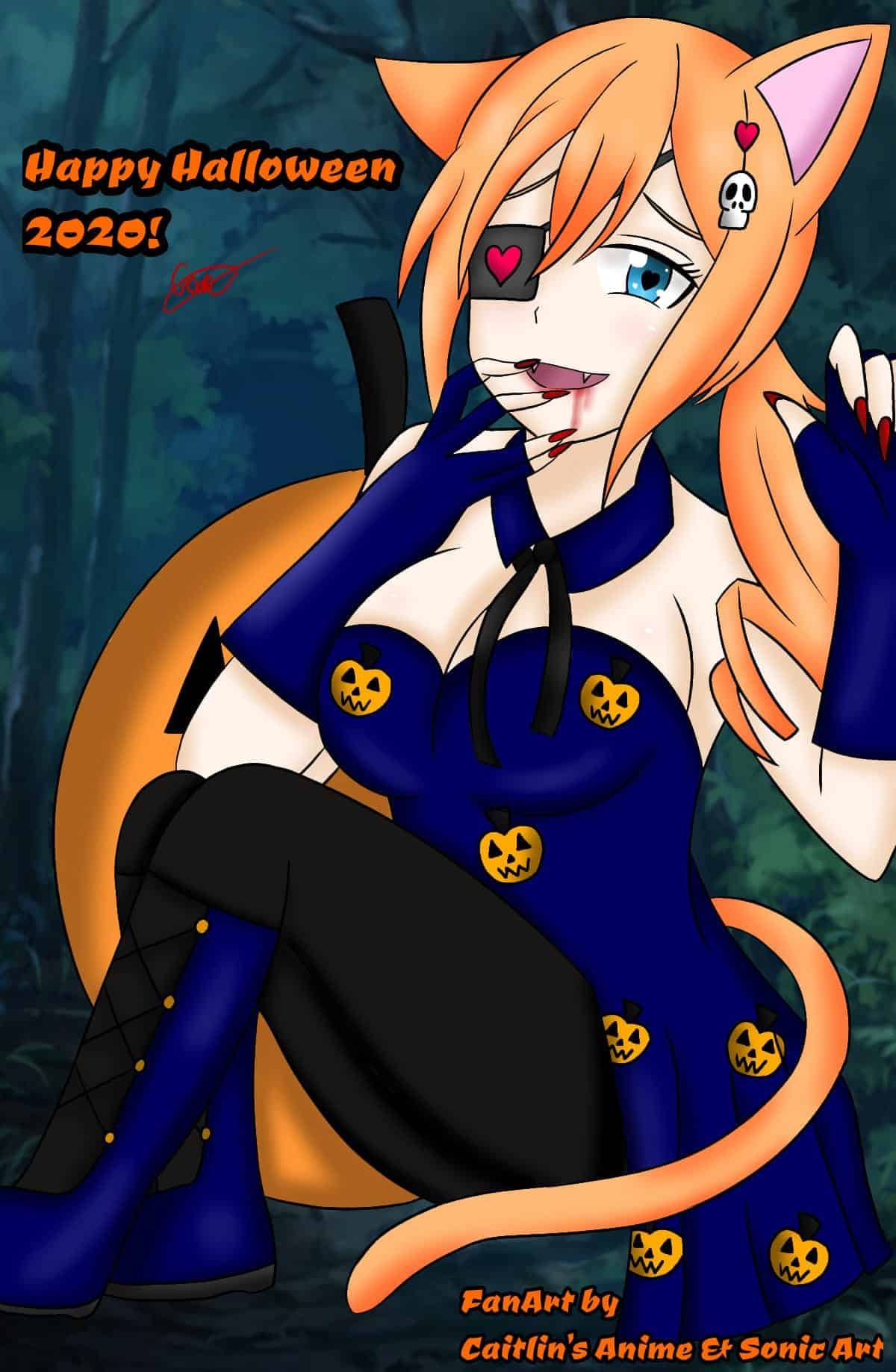 We are hoping to do one more contest before the end of the year. This one might be a little different, as it may be a design contest instead of a fan art contest.

We hope to make this announcement very soon so everyone has plenty of time to enter!

Thank you so much to everyone who entered our Halloween Art Contest!

Hope to see you again next year.