Although there’s a lot of backlash for the anniversary, September 28 was supposed to be a very happy day for Genshin Impact fans, as one year has passed since the game launched in 2020.

Many fans expected some huge rewards dropping on the first anniversary of the game, but that wasn’t the case.

To celebrate its first anniversary, Genshin Impact announced a daily reward system that would go on for seven days. Also, users were to be allotted 10 wishes to summon a character, in addition to other rewards.

As reported earlier in brief, Genshin Impact was getting countless 1-star reviews on the Google Play store. As of writing, ratings have dropped below 2.1.

Previously, the game had an impressive score of 4.5/5. Most of the recent reviewers who rated 1 star said that they are disappointed about the lack of good rewards during the anniversary event. 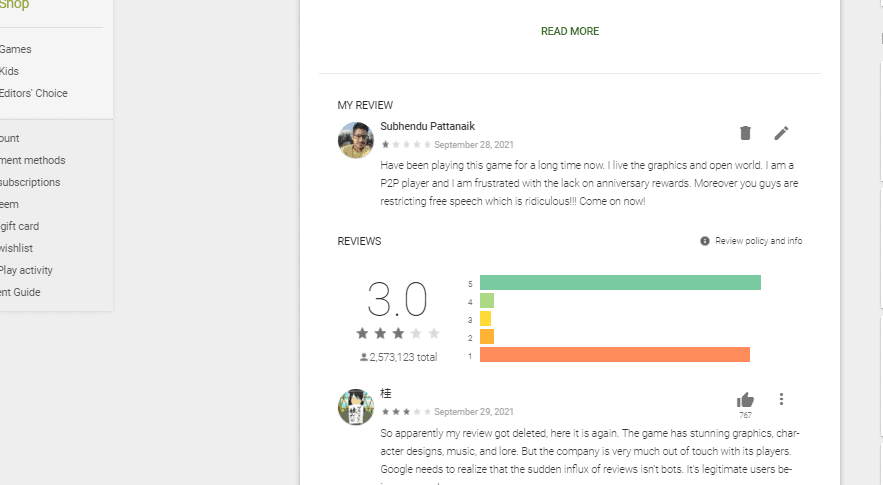 Furthermore, some fans are review bombing other games from miHoYo. For example, Honkai Impact 3rd is getting 1-star reviews on Google Play Store.

What is Genshin Impact?

Genshin Impact is an action role-playing game developed by a Chinese company called miHoYo. The game is available to play on multiple platforms, including Android, PC, Apple, and Play Station. The game became immensely popular among the Otaku community, becoming one of the highest-earning games of 2020.

Was miHoYo in the wrong? Should gamers have retaliated the way they did? Tell us what you think.