Since her debut in September 2020, Hololive’s Gawr Gura has been a runaway success for the entertainment company, and in less than a year, she has become the most popular VTuber.

Gawr Gura just recently hit 3 million subscribers on YouTube, blowing past the former top dog, Kizuna AI who has 2.97 million. The adorable apex predator has brought VTubers to the mainstream, unlike everyone before her or since. Gawr’s mix of hilarious gaming content and music covers took the Internet by storm.

Gawr Gura’s numbers are nothing short of impressive. In her first 10 months, Gawr has earned almost $700,000 worth in Super Chats which are YouTube’s version of Twitch donations. According to YouTube stats site Playboard, this puts Gawr at number 26 out of the Top 30 earners on YouTube streaming. 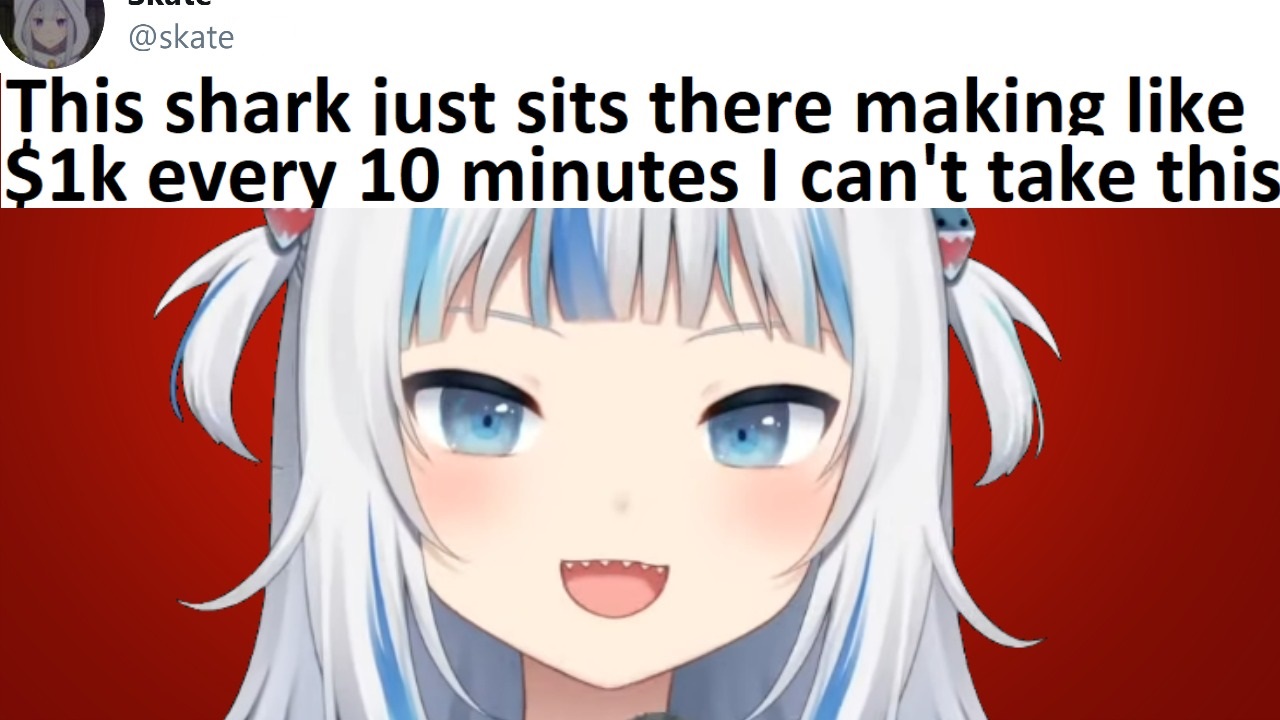 If she keeps this up, Gawr could break past the $1 million milestone in Super Chat revenue very soon.

The huge news doesn’t end there as during Anime Expo Lite 2021, anime figure manufacturer Good Smile Company unveiled their new Gawr Gura Nendoroid. Fans of the Hololive VTuber got their first look at a painted prototype alongside some faceplates and accessories.

Attention shrimps, Nendoroid Gawr Gura from hololive production splashes onto the scene! She is currently in production. More details, including a preorder window are coming soon so stay tuned for more!#hololive #goodsmile pic.twitter.com/sIee5M760H

The Gawr Gura figurine comes with her trademark shark hoodie and trident. Her tiny shark companion Bloop also comes with as an accessory. The Good Smile Company says pre-orders will open soon.

Among the Hololive stars, Gawr has the biggest lead over everyone else. Right after Gawr is Inugami Korone with 1.5 million subscribers, Usada Pekora slightly below that, and Mori Calliope sitting comfortably at 1.53 million subscribers. The only other Hololive member that was keeping up with Gawr was Kiryu Coco, however, she’s graduating from the company and ending her career with them.

Looking at HoloStats, Usada may very well be the next VTuber to hit 2 million subscribers. Her view growth actually surpasses Gawr’s.

As of this writing, Gawr Gura or Hololive has yet to hold a huge celebration for breaking this milestone. Typically, Hololive VTubers hold a special milestone stream to celebrate exceeding huge subscriber counts like 1 million or 2 million subscribers.

Typically, Gawr holds special karaoke streams that draw in massive numbers. Her most recent 2 million subscriber stream VOD has over a million views.

I highly recommend you check out Gawr Gura’s singing compilations on YouTube. There are tons of them on YouTube, and I must say, Gawr is a pretty singer. Her cover of “Ride on Time” by Tatsuto Yamashita is fantastic. Her cover has more views than the original song itself.

Gawr Gura also has an original song on YouTube titled Reflect that came out on June 21. Reflect has Gawr singing in both Japanese and English and it’s a banger. The song has elements of dark pop music and there’s a rap breakdown in the middle of the song.

Can't stop listening to @gawrgura 's new song. It's what the kids would call a "bop"https://t.co/Pnmo4m26Ej

Reflect is a mish-mash of different genres, but it all works well in the end.

A big congratulations to the apex predator of VTubers and I’m looking forward to seeing what the future holds for Gawr.