Which Character From “Spirited Away” Are You?

This has led to Dell adding a notice to some of its high-end, prebuilt PCs, stating that the product cannot be shipped to the six states because of the new energy consumption regulations.

This has led to many on the Internet worried about a crackdown on high-end PCs and what this bill could mean for game development.

The six states in question are California, Colorado, Hawaii, Oregon, Vermont, and Washington; all of whom signed into this new bill. At the end of 2016, the California Energy Commission (CEC) voted to adopt tighter energy efficiency standards in an effort to meet climate policy goals, making California the first state to approve this type of limit.

The state of California published a report that states “computer gaming in California consumed 4.1 terawatt-hours/year in 2016 or $700 million in energy bills…”

According to the same report, 66% of the emissions came from consoles, 31% from personal desktop computers, 3% from laptops, and less than 1% from streaming devices like Roku. Despite these findings, consoles are exempt from the law.

The news of the law had lead to many on social media proclaiming that this is the death of gaming PCs since so many of these companies are in California. But is this the case?

The Tier 20 Appliance Efficiency Regulations are available to the public, but to save time, there are three main points to focus on.

1) The regulations only apply to prebuilds from systems integrators like Dell.

2) Regulations apply when the PC is sleeping or idle.

3) Efficiency calculations are taken into account so bigger builds are favored.

Tech YouTuber, JayzTwoCents, goes into greater detail in a video where he explains the regulations.

What, Exactly, is Affected?

While California is not banning gaming PCs, the new energy standards do block the sale of certain prebuilt PCs that don’t meet the requirements such as Dell’s Aurora line of gaming desktops. None of them meet the new specifications, except for the Alienware Aurora R12.

But other than those select configurations, every other Dell and Alienware product meets the requirements.

The bill uses an Expandability Score (ES) to measure the power of a PC and decide whether the computer is expending too much energy or not. The table below is taken from the Tier Regulations. According to the table, if a computer’s ES is above 690, then the PC is expending too much power and doesn’t meet the bill’s standards. 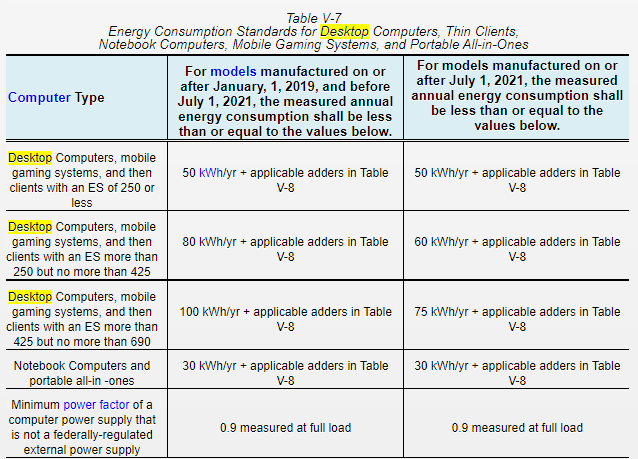 However, big PCs are given leeway with their energy expenditure due to their size, so a big gaming tower is likely to pass and be easier to purchase with these new regulations than a smaller build.

Plus, gamers can always build their own PCs. The bill only affects prebuilt personal computers from companies. Custom-built rigs are unaffected.

All in all, this controversy is greatly exaggerated and the new regulations will probably be good for curbing climate change.