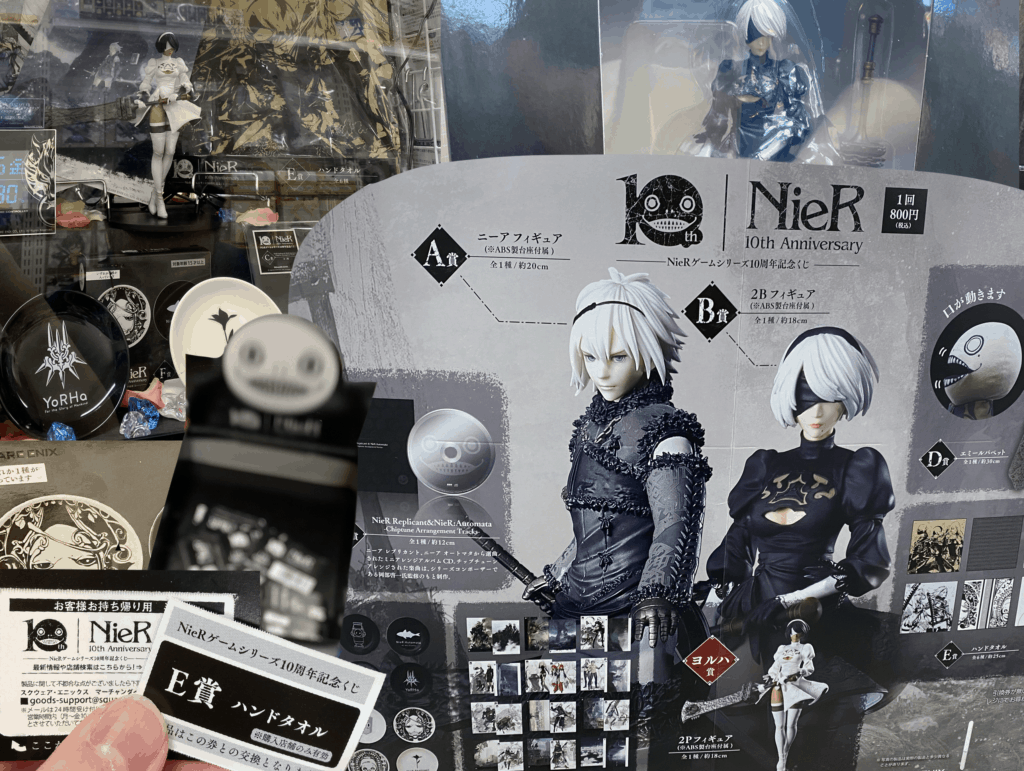 “Kuji” means raffle or lottery in Japanese. There are plenty of anime figures, as well as other trinkets and collectibles, that are exclusive to these Kujis. Each month, there are easily more than five simultaneous Kuji releases by different companies.

Collectors go crazy for their favorite series and, unfortunately, so do scalpers. These figures, especially the top prizes, have a high resale value depending on the anime. We’ll delve deeper into that later.

First, let’s talk about how the Kuji system generally works.

You go to participating shops such as hobby stores like Amiami, Hobby Tengoku, Kiddyland, and Liberty, or arcades like Sega and Taito, or even convenience stores such as 7-11 and Family Mart.

You can find the list of participating stores on the host company’s websites like “Ichibankuji” and the closest location to you.

The shop will have big posters advertising the running Kuji as well as pictures of the possible prizes. In the corner of the poster, you will find a box with small cards, each of which will tell you how much a ticket will cost.

Usually, they are about 800 yen, approximately $8 USD. Bring that to the cashier and communicate how many times you want to try the raffle. They will bring out a box of tickets.

Take your pick and rip open the card, starting from the corner, to reveal your prize. No one leaves empty-handed.

Even the lowest tier prize is something like a clear file, poster, small plate, or rubber keychain. The letter on the card indicates which prize you have won.

The exclusive figures are usually prizes A and B but some Kuji have C and D as top tier prizes too, depending on the range of characters featured. Plus, there is usually a rare prize called “Last One” which is either an alternate color, the top figures posing, or even a completely different figure that doesn’t match the collection. 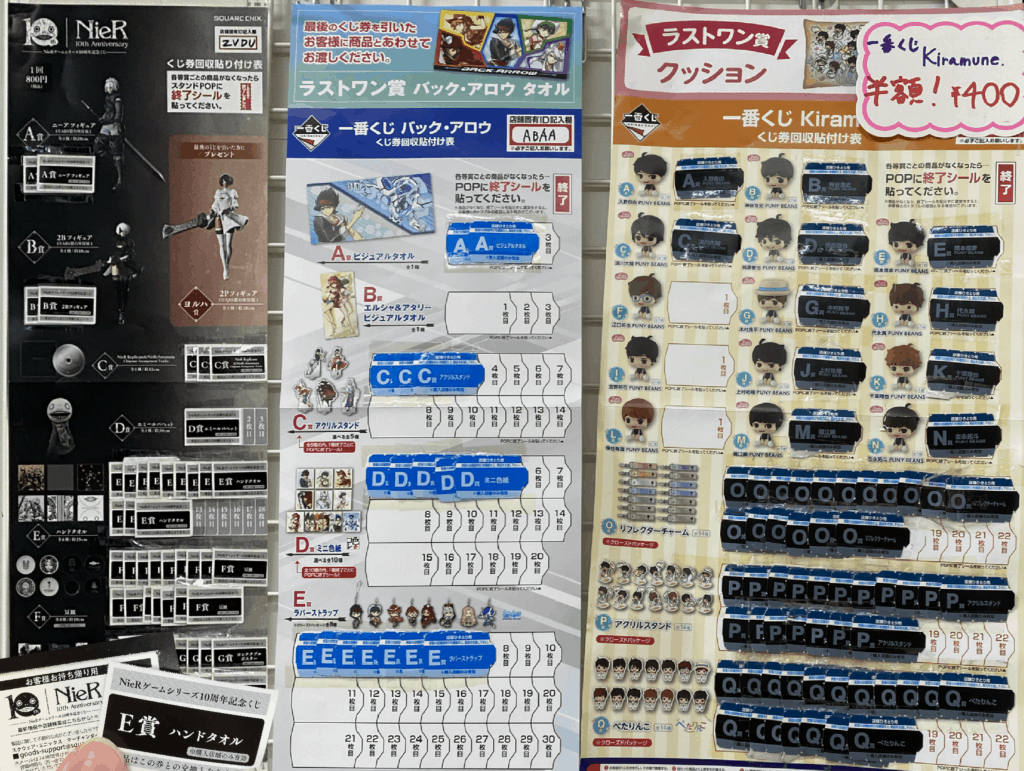 You can also check which of the prizes have run out so that you can better gauge your chances. Some places also display the prizes available so you won’t go for a Kuji that has already run out of the specific figure you are hoping to get.

If you look closely at the poster, you will see there are tickets taped beside the prizes that have already been claimed. Half of your ticket is stuck on there to tally the remaining prizes. The other half gives you another chance to try the Kuji online if you visit their website.

Some Kujis are so popular that they run out the same day they are released such as the Jojo’s Bizarre Adventure Kuji that began on April 10, 2021. According to the clerk in Sega, Akihabara, the tickets ran out after just a few hours.

If you are a hard-core collector, then it’s best to get up early and line up before the store opens. However, if you are a dedicated collector with no limit to your budget, it helps to know that some scalpers buy out the more valuable figures and sell those top prizes online for a higher price.

You can argue this is unethical but not a lot of people do this because when you consider the number of lower-tier prizes there are, there is only a small chance to get the A and B prizes before spending more than the resale value. Also, after some time, you can find some of the figures in second-hand shops or eBay.

Depending on their popularity, some of these figures can sell for up to $300 USD. The value of the prizes depends on the anime’s popularity as well as the character. Let’s say there is an Attack on Titan Kuji. Eren, who is the main character, might be placed as the A prize but Levi, who is the B prize, is actually more popular and will have more resale value.

There are serious enthusiasts who sell the top prizes they win to second-hand stores because there is a small paint imperfection or dent on them. So, if you missed a Kuji, you definitely have a good chance of finding prizes in second-hand shops or online.

Kujis in Japan can have some really great prizes from your favorite anime series. Although the likelihood of winning the top prizes is low, there is still always the possibility of you getting one, even on your first draw. If you think you want to give it a try, then I wish you the best of luck!