In the fall of 2020, it was confirmed that Hiro Mashima’s Edens Zero manga will be adapted into an anime. Hiro Mashima is also the author of the popular anime and manga, Fairy Tail. Since Fairy Tail ended, fans of Hiro Mashima have been waiting for the anime adaptation of his latest work. 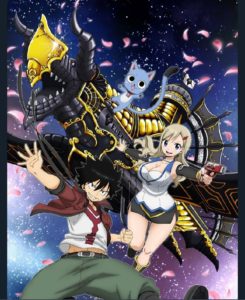 Even though we already knew Edens Zero will be making its debut sometime in April 2021, the specific date was unknown and only a few other details had been confirmed until, recently, Kodansha released a teaser video to promote the TV anime series.

What Does the Teaser Disclose?

The teaser video reveals additional staff members and confirms the anime’s premiere on April 10, 2021. There is not much else to see in the teaser video but it does give us a first look at what to expect from Edens Zero and how different it will be from its Fairy Tail predecessor. The anime will premiere on NTV and other channels on Saturday, April 10.

The announced cast for the anime includes: Takuma Terashima as Shiki Granbell, Mikako Komatsu as Rebecca Bluegarden, and Rie Kugimiya will return from Fairy Tail as Happy.

The new staff members revealed are:

Edens Zero, the TV anime, will be directed by Shinji Ishihara, who also directed the Fairy Tail anime. Yūshi Suzuki (episode director for Fairy Tail “Season 3”) is also directing the anime and Mitsutaka Hirota (Rent-A-Girlfriend) will write the scripts for the series. Yurika Sako (Food Wars: The Third Plate) will serve as the character designer. The anime will be produced by J.C.Staff.

What are your thoughts on Edens Zero and its teaser video? As a fan of Hiro Mashima’s works, will you be watching this anime series?