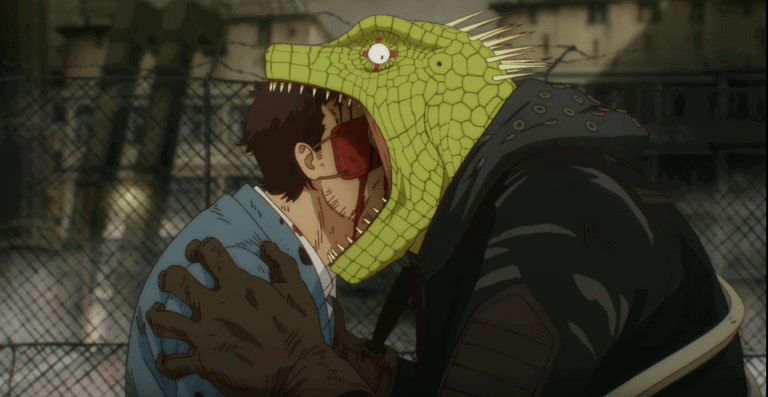 Dorohedoro has completed it’s 1st season, after adapting the manga into a 12 episode season. The action comedy ended the season shrouded in mystery, as the viewers were left with a lot of unanswered questions.

The official website for Dorohedoro has announced six new Ma no Omake (Magic Bonus) original video anime episodes, which will be among the animal’s 2nd blue-ray disc set to be shipped on June 17th.

The bonus episodes are expected to have a total run time of about 30 minutes, adding to the gory fun that was Dorohedoro’s first season. Fans of the manga and anime have a lot to look forward to as there will be a first box set ship on May 20th.

The May 20th ship will include promotional videos, a Nikaido finger skateboard toy, the first six episodes of the completed season, a bonus CD, five stickers and the opening and ending animation sequences…… there sure will be lots of anime goodness to expect.

The June 17th release that has the bonus episodes, will also have promotional videos and commercial as well as custom sneaker shoe style earrings.

Fans of Q Hayashida’s Dorohedoro manga and anime will have to make do with the 6 OVA to be released soon as the 2nd season of the anime does not have a release date yet.

It is important to note that the season 1 has animated all the manga chapters, leaving no more source material content for animation of the new season. However there is a feeling that while the OVA stalls we will get more content to adapt.

There are high Hope’s that a 2nd season would be produced in 2021, as we get to see Kaiman and Nikiado and the search for the sorcerer who turned Kaiman into a lizard-man.

The first season was produced by studio Mappa, which is well known for its work on Dororo. Yuichiro Hayashi led the production team. The anime premiered on January 13th and it was also streamed by Netflix.