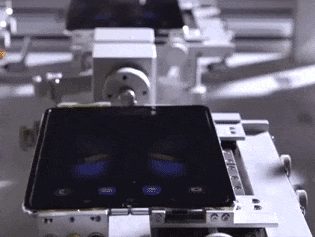 Folding phones is the next trend in smart phone gimmicks. Unlike the curved screen of previous Samsung phones, the “folding” phone is something that has been pioneered by many Chinese phone manufacturers and we will see this type of feature in many future phones if this trend picks up.

This is probably the most obvious one, but Samsung bragged about how the phone survived over 200,000 folds.

What isn’t being accounted for is what obviously looks like machines folding the phones in perfectly controlled and optimal circumstances.

People like to fling their phones open to look cool, they’re in a rush, etc, unlike a machine, humans use a variable level of force depending on the situation.

While we haven’t personally seen a broken hinge yet, the perfect conditions “user testing” leads to the next major flaw…

The screen on my Galaxy Fold review unit is completely broken and unusable just two days in. Hard to know if this is widespread or not. pic.twitter.com/G0OHj3DQHw

How was this so overlooked? Obviously users would be tempted to peel off some thin film layer from the screen.

Why is such a major protective component of their screen (apparently necessary for the screen to work), so vulnerable and easy to peel off?

The phone comes with this protective layer/film. Samsung says you are not supposed to remove it. I removed it, not knowing you’re not supposed to (consumers won’t know either). It appeared removable in the left corner, so I took it off. I believe this contributed to the problem. pic.twitter.com/fU646D2zpY

3. The Thickness of the Device

It’s 2019, we’ve come to a point where smart phones are so thin that people buy phone cases specifically to make their phones thicker and less easy to drop!

Now with the introduction of folding phones, it seems the race towards the thinnest folding phone is starting all over again!

Based on some of the other folding phone prototypes I have seen, it looks like Samsung may soon be on the losing end of this battle.

This might seem like a small issue, so what if half the navigation bar is cut off?

Well, this problem is only amplified when watching full screen videos in landscape mode.

Many mobile games have UI elements or important buttons on the edges of the screen, now with these gigantic selfie cameras and sensors taking up a portion of the screen, users might be missing some important content.

How important is it that users need to take selfies while the screen is open? Was it really necessary to remove this much screen real estate for it?

5. Half a Screen on the Front

The front screen on this device is so pathetic it’s laughable.

Why bother even including such a pathetic excuse for a screen on the front?

The next company that releases a smart phone with a slightly bigger screen that this one will already have the edge over Samsung.

Even if the layer isn’t removed by the end user, the fact that the lip is so accessible means that over time dust and dirt may creep underneath and eventually the screen could be rendered useless!

At nearly $2,000, you might be better off just buying two phones or one phone and a tablet.

On a positive note, we really do love and encourage the exciting innovation in this industry!

However, it always seems to be the case that the first people out of the gate on this will take the fall for others to enter the market with less problems, more refinements, and a lower price!

Capitalism is a great thing for the consumer when it comes to tech!