Magnificent, brilliant, amazing, stellar… you will run out of positive superlatives to describe this final season.

The fourth and final season of Netflix’s Castlevania was released on May 13 and it is the best video game adaptation ever made. As the final season, this concluding arc gives beautiful, emotional farewells to the characters and sets up subsequent stories.

Castlevania‘s “Season 4” takes on the amazing work done in the three previous seasons and upgrades them.

Trevor and Sypha are the main stars of the season, having more screen time than others and they begin the season with a series of adventure missions that seem like a nod to the video games.

The pacing of this show gets better in the second half of this 10-episode season. The animation is as glorious as ever. The visuals were made by Powerhouse Animation and the show is directed by Sam Deats. Their impressive work on this cannot be over-emphasized.

Voice acting in this fourth season is top-notch, capturing the emotions of humans and vampires alike in different situations. The new cast additions are awesome. Varney, Ratko, Zamfir, and Greta all serve their purpose. Greta proved to be more than just a new face and if there will be more stories, then I hope to see more of her. 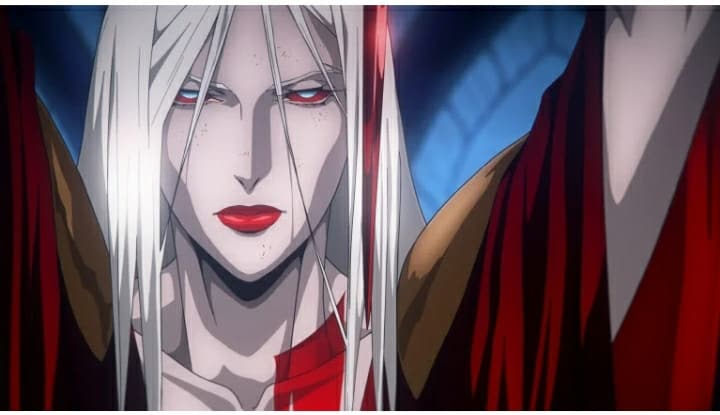 Castlevania never falters on sound. The theme songs and lively beats used always fit the occasion, especially during fight scenes or one of those Castlevania-unique philosophical discussions that, most times, lead nowhere.

Apart from Trevor and Sypha, the forge master duo of Isaac and Hector also have key roles to play this season. And with all factions going to war, there is a lot of screen time for everybody.

The vampire quartet sisters might feel hard done. Carmilla doesn’t benefit much from the screen time but when she does arrive, it’s rage, blood, gore, and clashing of swords. Carmilla’s fight against Isaac in episode six is one of the show’s finest, reminding you at several points why you fell in love with Castlevania.

Episode nine is the cream of the crop, one of the best episodes I have seen in any series. The original trio of Trevor, Sypha, and Alucard go all out in an intense series of battles reminiscent of final boss battles in video games.

Castlevania leaves our screens with a bang and it will be on our minds for a long time. This season is a fitting conclusion to a wonderful series.

Advertise with us
153
likes / shares
FacebookTwitter