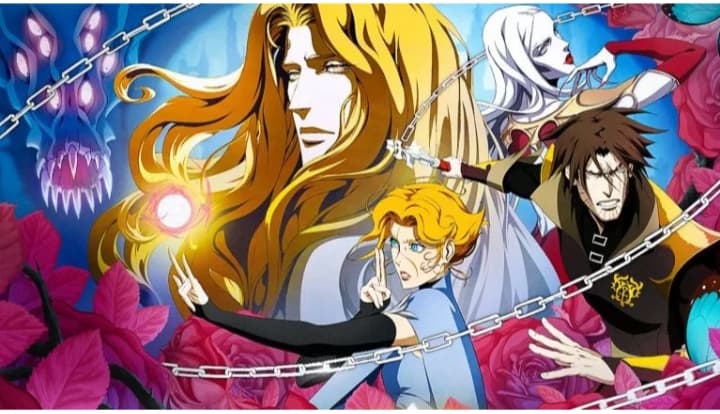 How does the series survive life after Dracula?

A focus on characters rather than plot.

Castlevania, which prides itself as being one of the finest video game adaptation ever released its 3rd season in the first week of March.

Killing off the great evil Dracula in the second season, left fans wondering what to expect. Losing its villain made an already unpredictable show way more unpredictable. What direction would the directors follow next?

The producers and show runners – Adi Shankar, Warren Ellis and Kevin Kolde all did an amazing job this season, comfortably filling the void created by the demise of Dracula and in the process making what could be said to be the strongest season of the series yet.

The season starts with Alucard now manning his father’s now immovable castle, loneliness has gotten the better of him, while Sypha and Trevor travel together killing monsters.

Carmilla heads to Styria with her captive forge master – Hector, while Isaac begins his journey to gather an army and avenge his fallen lord. The major characters are scattered and they all tow different paths this season … never to cross each other.

One major aspect that sets Castlevania out from other shows is the focus on conversations, as this is a major part of the character development.

Witty conversations laced with characterized sarcastic humor leading to deep philosophical discussions have been the theme from season 1. It is obvious this season through the characters of Isaac and the debutant Saint Germain.

Saint Germain turns out to be the best addition this season, his character feels right at home, as though we’ve known him right from the 1st season. The mysteriously knowledgeable noble man turned out to be an unlikely hero in the end.

Carmilla’s arc was brilliant, showcasing her relationship and interactions with her Vampire sisters (The ruling court of Styria- Lenore, Morana and Striga).

We all expected a war from Carmilla, and for it to be bigger than expected. However, the slow pace of this season ended before Carmilla’s war; but, it is coming.

Fan favorites, Sypha, Belnades and Trevor Belmont have built on their relationship, killing monsters together as an actual couple leads them to the town of Lindenfeld. Here we get to meet some new characters – the Judge, Saint Germain and the creepy Monk Prior Sala.

Trevor and Sophia’s arc is the main focus of this season, as we spend more time in Lindenfeld investigating the abomination being perpetuated by the broken monks and the aftermath of their actions.

Season 3 brings to the forefront more of the brutal fight scenes we have missed so much, but something else has been added — SEX. The sexual tension built over time finally pays off as sexual scenes are blended so well to give way for epic fight scenes…. who would have thought?

The scene where Isaac speaks to the ship Captain is a personal favorite of mine, intellectual discussions that lead to Isaac questioning his commitments reminds us of why we love this series.

Manipulation and mistrust – Lenore and Hector, as well as Alucard as his students. It all ends in blood as Alucard notices similarities between him and his “dead old dad”.

Season 3 of Castlevania is a solid piece of art that moves the story from Dracula’s death unto bigger things yet to come. An excellent season.

Advertise with us
95
likes / shares
FacebookTwitter