With the second season set to premiere next month, the third and fourth season of Cardfight!! Vanguard Overdress anime has already been confirmed.

Bushiroad made their announcement about the new seasons during the Bushiroad TCG Strategy Presentation 2021 live stream event.

As the trading card game franchise celebrated its 10th-anniversary title, the first season of the TV anime Cardfight!! Vanguard Overdress aired for 12 episodes earlier this year, and its 13-episode second season is already set to premiere in Japan on October 4, 2021. The second season will stream on multiple platforms in Japan. The show’s first season will have a rebroadcast on Tokyo MX starting on October 4.

The announcement also featured a key visual and a promo video for the upcoming second season.

Cardfight!! Vanguard Overdress is based on the trading card game franchise. It has been revealed that the second season’s OP theme, “START”, is sung by the six-member Japanese group, Strawberry Prince StoPuri. 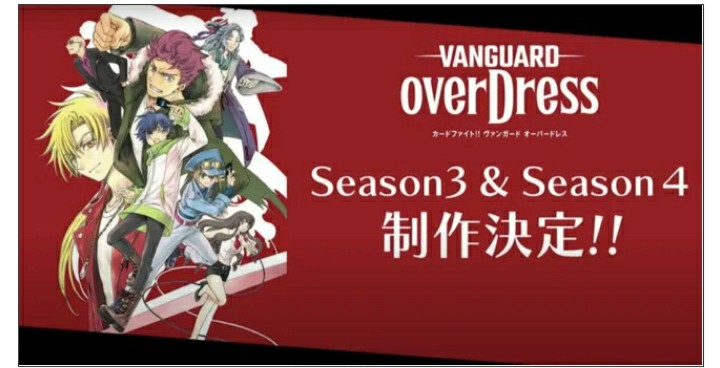 Among the staff is:

The anime is described thus:

Third-year middle school student Yu-yu Kondo lives in Kanazawa city of the country of Kaga. Being unable to reject requests, Yu-yu often gets caught up in his sister’s hobbies. When Yu-yu could no longer bear it and ran away from home, he was saved by Megumi Okura. Megumi invites Yu-yu to the Night Amusement Park “Wonder Hill” where her friends gather. The amusement park is where many youths of the Vanguard-centric group “Team Blackout” gather. And this is how Yu-yu encounters Vanguard and was drawn in by the appeal of Vanguard and the world and friends he had never seen before.

Will you be watching the second season when it airs next month?