Are You a Pro Trap Detector? Take the Ultimate Test! 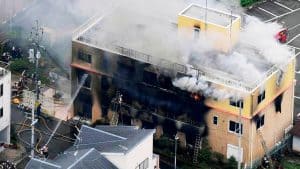 I know what you are thinking, this is rather saucy. While it may not be the “justice” story many were hoping for, we are here to share what we have heard, without any political filter or bias.

Feel free to express your opinions in the comments below!

Many of us still remember the incident that took place last year regarding the Kyoto Animation fies.

What Happened So Far?

The accused arsonist, Shinji Aoba, allegedly burned down the entire animation studio. Almost 70 people were working at the time when this dreadful incident took place.

When the smoke cleared, we got to know that only 7 people managed to get out of the building right in time, 17 people, including the arsonist, remain hospitalized. 18 victims have gone home after their treatment but 33 people (12 men, 20 women, 1 nonspecified gender ) lost their souls to one man losing all of his sanity.

The arsonist tried to flee the scene by running away but that didn’t last long, as cops apprehended him from 100 meters away from the studio. he tried to run away from the cops but he couldn’t save himself from the fire he created, he got burnt, which forced the cops to put Shinji Aoba in hospital. Cops are waiting for him to get recovered so he can serve for the horrendous crime he has committed.

Where is He Now?

He is now in the hospital recovering for the third-degree burn, which covers 90 percent of his body. To everyone’s surprise, he is indeed recovering quite well.

Kindai University Hospital in Osaka giving him enough treatment to recover faster. During his physical rehabilitation, Shinji has allegedly taken quite a liking to one of the nurses, who has been helping him to get back on his feet. (weekly magazine Shukan Bunshun)

From the magazine, ‘Aoba was always in good spirits and displayed a positive attitude towards physical rehabilitation when the nurse was on duty.’

Now the arsonist has moved to another location to recover from the injuries. He has been reportedly showing negative signs towards rehabilitation; his behaviors have allegedly changed completely compared to what it used to be around the nurse.

By not taking any single step towards rehabilitation Aoba’s condition seems to have been getting worse. This could mean he will spend more moths, if not years, in the medical center, which is a tragic blow for all family members who lost their loved ones in the horrible day and are hoping for justice.

Who is the Nurse?

At this time we don’t have a name or any images of this nurse. We are sure she would prefer to remain out of the spotlight anyways and just return to her normal life.

Advertise with us
825
likes / shares
FacebookTwitter