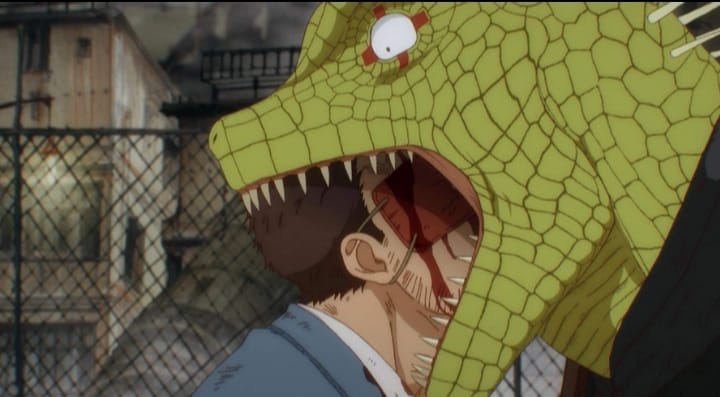 Anime fans round the world looked forward to the new decade with optimism after the success of most Anime in 2019.

So it was no surprise that 2020 started with a bang when the Mappa Studio produced anime, licensed with Netflix released it’s first episode on the 12th of January.

Dorohedoro is an action fantasy, magical fights and martial art styled attacks add to an already gory theme laced with bits of comedy.

Dorohedoro is an Anime that centres it’s story around two distinct but similar species – sorcerers and humans. The humans live in a wretched city called hole while the sorcerers have their own world.

Sorcerers can use magic, while the humans generally are prey of practice for the sorcerers. The story focuses on the main character Caiman, whose encounter with a sorcerer left him with a lizard head.

Caiman and his friend Nikaido wreck havoc on the sorcerers in a quest to find out his identity and transform his head back to normal.

Dorohedoro anime currently has six episodes, with episode 7 set to be released on the 23rd of February. Episode one starts off with Caiman and Nikaido fighting off two sorcerers, during the course of this episode other character such as the skull shaped mask wearing Ebisu and the sorcerer Fujita are introduced.

The 2nd and 3rd episodes explore the comedic partnership between Shin and Noi, and gives us a brief introduction to the cross eye group. We also get to see a bit of world building in the Hole as the annual festival Living dead day unravels.

Up next is an episode about En and his underlings, and their plans for Caiman and Nikaido. Something weird happens next…. A corpse party!

Episode 5 and 6 focuses on Caiman and Nikaido’s journey to the sorcerer’s world. En interrogates Risu, trying to get Intel about the cross eyes. Nikaido is confirmed to be a sorcerer, a very powerful one at that. More and more violence and mushroom goodness occurs.

Dorohedoro has so much to offer in way of entertainment, thrill and a very refreshing art style. This anime comes highly recommended. If you are already following it, tell us how you feel about it.

Advertise with us
215
likes / shares
FacebookTwitter