“Higurashi: When They Cry” Will Resume in July 2021

“Kaitori” is a Japanese word that uses the Kanji KAI 買 and TORI 取り. Kai means “sell” and Tori means “take”. This describes a service where second-hand shops can buy your used or unwanted goods to resell in their store.

In Japan, there are many anime figure collectors and endless cycles of trending anime. Therefore, these places that resell used merchandise have been a prized part of the anime-loving community. 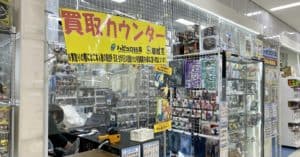 Figures that were bought or won in arcades can be sold to these second-hand shops. They take both used and unopened merchandise.

Of course, the more rare and mint condition merch can sell for more money. However, this is not a place where you would expect to make more money after purchasing goods from official shops.

They usually buy unwanted items for a much lower price and, sometimes, they refuse to take items that have no resell value.

The value of the items is determined by popularity. For example, you try your luck at a Gachapon machine.

Each roll for a random keychain costs you 300 yen. Say you get one keychain of the most popular character, three of the second popular one, and six of a character that a lot of people do not like.

If you take this set to a Kaitori counter, you might be able to sell the most popular one for 400 yen which is only 100 yen more than the cost of the keychain. Then, the second most popular one sells only for 100 yen each and the least popular character for 10 yen.

The second-hand shop is a good place to go if you want to get rid of six items for the character you did not want. Once they take in your items, they would typically sell popular characters for an insane amount like 2000-4000 yen because of the demand.

If you are looking for rare characters and do not want to waste your time rolling in Gachapon machines, you might be able to find them in second-hand shops. 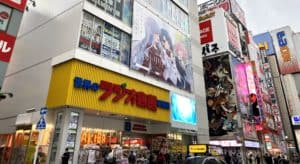 Popular spots that buy and sell anime collectibles are stores in Radio Kaikan, Lashing Bang, K-Books, Mandarake, Liberty, Hobby Tengoku, and Mulan. If you walk around Akihabara, there are also lesser-known stores with the same setup.

There are cases when you might be able to talk up your goods and sell them for a better price. Bigger places like K-Books, where there are long lines of people waiting to sell their merch, don’t let you negotiate. Shops like these rely on their database which tells the clerk how much each specific item costs.

Meanwhile, the smaller traders usually determine prices using their own judgment. If you are unsure whether you are getting the best deal, it is good to go ask for quotes from several places before selling your items for good. 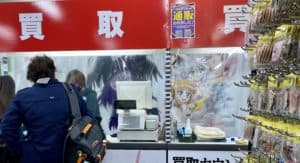 The Second-hand Shop, a Haven for Buyers & Sellers

Most collectors tend to tire of some series or just outgrow their figure collections. Instead of going through the trouble of selling them online or getting nothing after donating a collection, second-hand shops are the best place to take our loved items.

Also, a lot of crane game hobbyists who just want to enjoy the UFO catchers and aren’t interested in the prizes tend to sell their wins to second-hand stores. If you have very bad luck with crane games, maybe you can find some prizes you wanted in second-hand shops. It’s a win-win situation for the collectors and resellers. 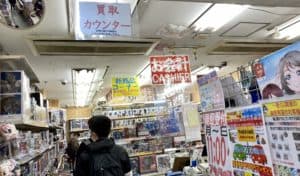 The process of buying used items is the same as any old store. Browse around, find your favorite items, and pay for them at the cashier. However, a word of caution, a lot of second-hand shops do not price their items similarly. A full-sized figure can be sold for 4000 yen in one shop and 900 yen in another.

Usually, the rarity of the figures determines their value and the location of the shop plays a factor too. If they are close to a station, they tend to sell their goods for higher prices because they get better traffic.

Want to sell some old figures or trinkets yourself? Here are some tips. First of all, clean the figures. Make sure they are not dusty and make sure they are not modified. Second-hand shops do not take repainted figures and usually object to figures with missing parts. Also, they do not take unofficial goods and trinkets from series that are too old.

If you would like to try selling your vintage anime goods, there are some places in Nakano Broadway that would take them, but the majority of the places in Akihabara only take well-known anime goods.

It helps if you have the original packaging and pamphlets. Once you surrender your goods to the appraiser, give them some time to examine your items and they will come back with a list of all your items and their estimated values.

Don’t be surprised if most of them can only sell for 10 yen or when they reject some items. If you simply want the items out of your hands, ask them to take it all for free.

There are many other ways people can resell their collections! Join me again next time to find out how rentable glass cubes in Akihabara help figures find new homes.

I’ll cover other typical shops you can expect to see when visiting this city as well.