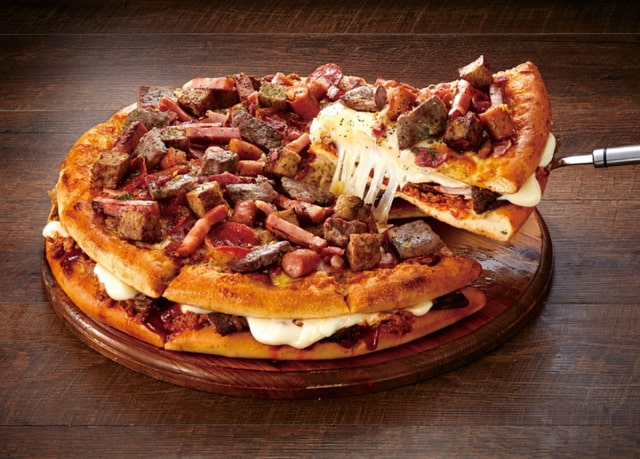 This mighty pizza comes from japan in the name of Nikku Mountain (“Meat Mountain“). And the mountain it is. The brain behind this layer of an idea is from Aoki’s pizza, they are known for breaking the topping glass ceiling. Previously, they have made pizzas filled with cookie and chocolate bar topping.

But this one shatters the expectation for the people who were waiting to taste something new and exciting from the food chain, because this mountain weighs in at two kilograms (4.4 pounds) packing in a variety of meats, seeing this, will make a Bengal tiger vegan.

The mountain comes with two thick crust pizzas joining the forces together with gooey melted cheese as it is the sandwich from hell. And, of course, Meats, a lot of meats.

Here is a list of meat you will get from the Meat mountain.

Beefsteak, hamburger patty pieces, pork loin, Iberian bacon, diced bacon, sliced ​​bacon, bacon bits, Bavarian sausage, pepperoni, mini wiener sausage, pork sausage, Italian sausage. That is just the top of the mountain wait till you slide it down to what’s at the below? which is technically possible from all the cheese in the pizzas.

The mountain would be a great pick to anybody who is still a vegan. If you are to lose your vegan-ty to a slice of single meat, you might as well go for the one with 18 different types of meats sandwiched in two-crust pizzas with a slimy melted cheese.

Can You Believe “Demon Slayer” Box Office Surpasses “Spirited Away”?

Chance are slim for a kale digestion stomach to digest all these meats, but it will the best sex your mouth will ever have.

Watch out America, there’s a new country in the town, who has been experimenting with cheese.

Advertise with us
87
likes / shares
FacebookTwitter